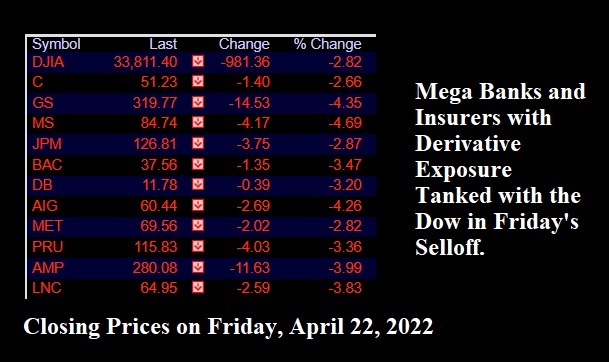 The Federal Reserve (the Fed) is the central bank of the United States. It sets monetary policy, including control of the benchmark short-term interest rate known as the Federal Funds rate, or in Wall Street jargon, the “Fed Funds” rate. This is a key rate because it signals the rate at which overnight loans are made between financial institutions and the direction of interest rates in general.

Unfortunately, over time, the Fed has also been granted a supervisory role by Congress over Wall Street’s megabanks alongside its ability to bail them out when its crony brand of supervision fails. There was an epic failure in the Fed’s supervision of the Wall Street megabanks in the leadup to the 2008 financial crash and the September 2019 repo blowup. In both cases, the Fed made trillions of dollars in cumulative loans at below-market interest rates to the trading units of these megabanks in order to resuscitate them and cover up its own failure to properly supervise the banks.

The convulsions the stock market experienced last Thursday and Friday, that investors will continue to witness in the days ahead, are inextricably tied to the failure of Congress to strip the Fed of a supervisory role over these global megabanks.

There is no better snapshot of the Fed’s failure as a banking supervisor than this one fact that is called out every quarter in the Office of the Comptroller of the Currency’s Report on Bank Trading and Derivative Activities. Table 14 of this report (see page 19) shows that the 25 largest bank holding companies in the U.S. are sitting on $234 trillion notional (face amount) in derivatives but just five bank holding companies are responsible for $200.18 trillion of that exposure or 86 percent of the total. Those mega bank holding companies are: JPMorgan Chase (ticker JPM), Citigroup (C), Goldman Sachs (GS), Morgan Stanley (MS) and Bank of America (BAC).

The table also clearly shows that the most dangerous form of these derivatives – the same credit derivatives that blew up Wall Street in 2008 – are also concentrated at those same five bank holding companies.

But here’s what this quarterly report – or any other federal supervisory report – does not tell the public. It does not provide the names of the financial institutions that are on the other side of those derivative bets. To ferret out those names, one has to do independent research and watch stock market action. (More on that in a moment.)

Last Thursday, the delicate dance that Fed Chair Jerome Powell has been doing with Wall Street’s ticking derivatives time bombs, out-of-control inflation, and the Fed’s tardiness in raising rates spilled out during a panel discussion moderated by CNBC news anchor Sara Eisen. Present on the panel were the following: European Central Bank President Christine Lagarde; International Monetary Fund Managing Director Kristalina Georgieva; Federal Reserve Chair (Pro Tempore) Jerome Powell; the Finance Minister of Indonesia, Sri Mulyani Indrawati; and (virtually) the Prime Minister of Barbados, Mia Mottley. (Powell is serving as Chair Pro Tempore because he has yet to be confirmed for his second term as Fed Chair by the full Senate.)

The exchange that sent the stock market plunging went as follows between Eisen and Powell:

Eisen: “The market has three 50 basis point hikes coming at the next three meetings as of this morning. Is that reasonable?”

Powell: “So, I try not to comment on specific market pricing for things, but I will just say this: at our last meeting – and this was in the minutes of the meeting – many on the committee thought it would be appropriate for there to be one or more 50 basis point hikes.”

Eisen: “Were you one of those people?”

Powell: “I don’t disclose my own path. I try to lead the Committee. So, I think markets are processing what we’re saying; they’re reacting appropriately – generally. But I wouldn’t want to bless any particular market pricing. The thing I want to say, though, is we really are committed to using our tools to get 2 percent inflation back and I think, for example, if you look at the last tightening cycle, which was a two-year string of 25 basis point hikes from 2004 to 2006, inflation was a little over 3 percent. So inflation’s much higher now and our policy rate is still more accommodative than it was then. So it is appropriate in my view to be moving more quickly.

“And I also think there’s something in the idea of front-end loading whatever accommodation one thinks is appropriate. So that points in the direction of 50 basis points being on the table certainly.

“We make these decisions at the meeting and we’ll make them meeting by meeting but I would say that 50 basis points will be on the table for the May meeting.”

You can watch the full exchange at this link. The above back and forth between Eisen and Powell begins at 9:33 on the video.

By the closing bell on Thursday, April 21, the Dow Jones Industrial Average had fallen 368 points on Powell’s remarks. The market reflected further on those remarks and plunged by another 981 points on Friday, April 22, for a total two-day wipeout of 1,349 points in the Dow.

The mega banks that are known to have the bulk of the derivative exposure were hit hard in the selloff on Friday, as was the German global bank, Deutsche Bank, which is known to be a counterparty to derivatives on Wall Street. Also reported to have derivative exposure to Wall Street are insurance companies AIG, Metropolitan Life (MET), Prudential Financial (PRU), Ameriprise Financial (AMP) and Lincoln National (LNC). The chart above shows how the stocks of these financial institutions performed in Friday’s selloff.