Barbarians at the Gate – In Russia and on Wall Street 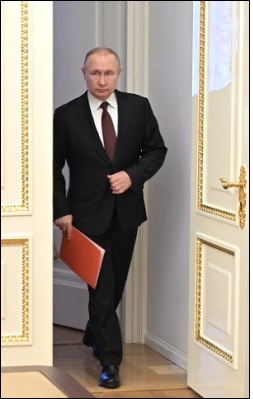 This morning Kremlin spokesman Dmitry Peskov told reporters on a conference call that the economic sanctions imposed on Russia by the West were “absolutely unprecedented.” He went on to say that those sanctions made it “very hard to forecast anything.”

Perhaps Putin should have thought about that before he invaded the neighboring country of Ukraine and launched a barbaric bombing assault on hospitals, schools, churches and apartment buildings.

The plunging Ruble means that Putin is going to be dealing with soaring inflation, capital flight (despite his capital controls), and the continued inability to reopen the Moscow Stock Exchange. The Exchange, known as MOEX, has been closed since Monday, February 28. Before they were suspended from trading on the London Stock Exchange on March 3, major Russian corporations were trading for pennies as a result of Western sanctions and the collapse in the Ruble.

Even the Russian central bank doubling its interest rate benchmark from 9.5 percent to 20 percent did not shore up the Ruble. Preventing the Ruble from finding a bottom is the fact that each day brings more major corporations announcing that they are severing ties with Russia for its brutal and illegal war. So far, more than five dozen famous brands have announced plans to suspend store operations in Russia, or cease shipping products there, or sever joint business operations. The wives and mistresses of the billionaire Russian oligarchs will henceforth have to travel outside the country to buy their Hermes Birkin handbags, their Apple iPhones, their Starbucks’ lattes and their Cartier Love bracelets.

Interestingly, the names of major corporations severing ties with Russia do not, as yet, include the big names on Wall Street. One day after Russia’s invasion of Ukraine, Wall Street On Parade broke the news that one of the four largest banks in the U.S., Citigroup’s Citibank, was servicing 500,000 customers in Russia and operating bank branches in 10 Russian cities: Moscow, St. Petersburg, Yekaterinburg, Nizhny Novgorod, Samara, Sochi, Rostov-on-Don, Volgograd, Ufa and Kazan. Citigroup, a multinational banking behemoth, has never had the best interests of the United States as a priority. After receiving the largest banking bailout in history from the U.S. government and the Federal Reserve from December 2007 through mid-July 2010 (a cumulative $2.5 trillion in loans, $45 billion in equity infusions, and more than $300 billion in asset guarantees) the bank went on its merry way serially violating the laws of the United States, paying fines, and then breaking more laws.

Yesterday, Citigroup released a statement indicating that instead of closing down its bank branches in Russia, or at least stating that it will accept no new deposits, it is merely operating on an undefined “more limited basis” while also “supporting our corporate clients in Russia.”

While the clear goal of the joint economic sanctions of the European Commission, U.S., U.K., and Canada is to wake Putin up to the reality that his own country and his political future will take a serious hit from his military aggressions, JPMorgan Chase and Goldman Sachs somehow interpreted that to mean they should go out and buy up cheap Russian corporate debt in the hopes of making a killing if the sanctions are lifted.

Now that we are seeing the shocking images daily on television news shows of what unchecked authoritarianism looks like, it was particularly appropriate that Senator Sherrod Brown, Chair of the U.S. Senate Banking Committee, chose this week to hold a hearing on another form of authoritarianism – Wall Street’s private justice system that denies both workers and customers the ability to access the nation’s courts for a claim against a Wall Street bank. One of the witnesses for the hearing, Paul Bland, an attorney and Executive Director of the non-profit group, Public Justice, said this:

“The vast majority of consumer financial services that are provided in America are accompanied by to a forced arbitration provision – consumers can’t go to court if they’re cheated or injured; they have to go to a secretive, unreviewable system selected by the corporation that wrote the contract. The use of forced arbitration clauses by lenders is grossly unfair to consumers.”

Forced arbitration is also a violation of the Seventh Amendment to the U.S. Constitution which reads:

“In Suits at common law, where the value in controversy shall exceed twenty dollars, the right of trial by jury shall be preserved, and no fact tried by a jury, shall be otherwise re-examined in any Court of the United States, than according to the rules of the common law.”

Laws don’t matter to Putin and laws don’t matter to Wall Street – as its banks have proven time and time and time again. The thing is, whether it’s a bully lacking a moral compass with 5,977 nuclear warheads in Russia, or bullies on Wall Street whose attitude is “it’s legal if you can get away with it,” very bad things happen when powerful people are not held to account. Americans learned that the hard way in 2008 when Wall Street collapsed the U.S. economy and brought on the worst economic downturn since the Great Depression of the 1930s.

The tragic part about Paul Bland’s testimony this past Tuesday before the Senate Banking Committee is that Mr. Bland and the Editor of this website were delivering those same warnings more than two decades ago, as was the non-profit Public Citizen, which also sent a witness, Remington Gregg, to testify at the hearing.

Until there is meaningful campaign finance reform in the United States, and members of Congress have to answer to the American people instead of their wealthy campaign funders on Wall Street, private justice systems will continue to make a joke of the promise of real democracy in the United States.

The most gripping moment in this week’s rapidly moving kaleidoscope between good and evil, courage and cowardice, involved a Disney film, a small child, and an underground bunker in Kyiv, Ukraine.

On February 28, just four days after Russia invaded Ukraine, Disney released a statement which said: “Given the unprovoked invasion of Ukraine and the tragic humanitarian crisis, we are pausing the release of theatrical films in Russia, including the upcoming Turning Red from Pixar.”

Disney’s stand became all the more poignant when a 7-year old girl, Amelia Anisovych, who had taken shelter with her family in a Kyiv underground bunker, was filmed on a cell phone video singing the uncannily appropriate lyrics to “Let It Go,” from the Disney movie, Frozen. A mother of two, Marta Smekhova, who was also in the bunker and filmed Amelia on her cell phone, posted the video to her Facebook page. It went viral from there. On Monday evening, Anderson Cooper played the video on his CNN news program.

The young child’s angelic voice and mastery of the challenging melody (see video clip below) has become a sensation on Twitter. U.K. newspapers are reporting that Amelia has now made it safely from the bunker to Poland with other members of her family.

The story line to “Frozen” is about the fearless Anna attempting to save her Kingdom of Arendelle from a spell that has cast it into a perpetual cold, icy winter. The lyrics to “Let It Go” include the following:

There’s a scene in the movie where Anna’s sister, Elsa, steps with trepidation on a dangerous, icy bridge and then, through her touch, magically melts the ice. One can only hope that little Amelia will melt the hearts of the Russian people and make them hold Putin to account.

Putin’s barbaric assault on Ukraine is being compared to the massacres and destruction he brought to Grozny, Chechnya in 1999 and 2000. Until now, Putin’s bombardment of Grozny was the worst since the Nazi shelling during World War II. Just as he is doing now, Putin also censored independent media reporting about Grozny from inside Russia. Thousands of civilian lives were lost and tens of thousands more were maimed and injured at the hands of Putin in Grozny.

As if to send a message that he plans a replay of his massacres of innocent children and women in Grozny, just yesterday Putin’s military bombed a maternity and children’s hospital in the city of Mariupol. Retired U.S. military officials appeared on U.S. television throughout yesterday, calling his actions in Ukraine “war crimes.”

When will people of conscience around the world say “enough is enough,” both to Putin and Wall Street.