Wall Street Banks Have an Alibi for their $11.23 Trillion in Emergency Repo Loans from the Fed – It’s a Doozy 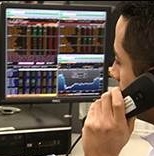 From September 17, 2019 through July 2, 2020, the trading units of the Wall Street megabanks (both domestic and foreign) took a cumulative total of $11.23 trillion in emergency repo loans from the Federal Reserve. The loans were conducted by one of the 12 regional Fed banks, the Federal Reserve Bank of New York – which is literally owned by megabanks, including JPMorgan Chase, Goldman Sachs, Citigroup, Morgan Stanley and others.

As we’ve been reporting this past week, there’s been a complete mainstream media news blackout on the names of the banks that were feeding at the Fed’s repo loan trough. The New York Fed released the names of the banks and the amounts they borrowed for the last quarter of 2019 a week ago Thursday, and yet all those Fed watchers at Bloomberg News, the Wall Street Journal, the New York Times, Financial Times, CNBC, MarketWatch, and Reuters just can’t seem to bring themselves to publish even 100 words on the subject.

Banks were borrowing huge sums over short spans of time from the Fed’s emergency repo facility. As we previously reported, from November 12 through November 25, 2019 – a span of just 14 days – J.P. Morgan Securities, the trading unit of the megabank JPMorgan Chase, pancaked term repo loans ranging from 14-days to 42-days, together with one overnight loan, to amass a total of $30 billion outstanding at one time. (You can download the data from the New York Fed at this link, as well as the data it previously released for the last 14 days of September 2019 in its Q3 2019 release.)

And J.P. Morgan Securities’ loan of $30 billion may be just the tip of the iceberg. The Fed has yet to release the details for any of the quarters in 2020. Under the Dodd-Frank financial reform legislation of 2010, the Fed has two years before it is legally required to release the names of the banks and their borrowing amounts.

Yesterday, we decided to ask four of the banks that own the New York Fed if they reported this emergency borrowing binge from the Fed on their SEC filings. Tens of billions of dollars in loans from an emergency Fed facility set up for the first time since the financial crisis of 2008 would seem to be a material disclosure required under securities laws.

We emailed the media relations folks at JPMorgan Chase, Goldman Sachs, Citigroup, and Morgan Stanley. The response from Goldman Sachs sought clarity on what data we were talking about. After we clarified that we heard nothing further from them. JPMorgan Chase and Morgan Stanley did not respond at all. But Citigroup’s response was very enlightening. It went like this: “I am going to decline to comment on this open market operations data.”

This strongly suggests that one or more banks are going to claim they were not required to disclose these tens of billions of dollars in emergency loans from the Fed – for a financial crisis that has yet to be explained and which came months before the first case of COVID-19 was reported by the CDC on January 20, 2020 – because they were not really taking emergency loans at all, but were simply being white knights helping the poor beleaguered Fed with its open market operations.

Unfortunately, that limp excuse has a mountain of facts and easily-produced charts to quickly sap its staying power. First of all, the Fed is not required to release its routine open market operations. It is only required to release the names of the banks involved in emergency loan operations. Secondly, as the chart below shows, this was the first time since the financial crisis of 2008 – the worst since the Great Depression – that the Fed had initiated its emergency repo loans. The stark difference between the bar graph for 2008 and the bar graph for 2019 casts aside any notion that there was not a serious financial problem in the fall of 2019. 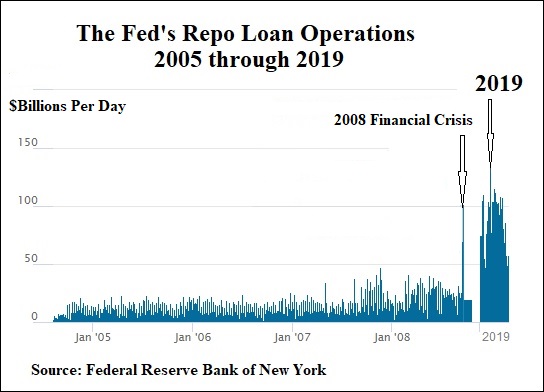 The chart we produced below from the Fed’s data illustrates Goldman Sachs’ outsized grab of a repo loan on November 25, 2019. The repo (repurchase agreement) market is an overnight market. Banks, corporations, money market funds and others borrow from each other overnight against safe collateral such as Treasury securities. But the Fed’s version of the repo market in 2019 morphed from overnight loans to making 14-day term loans to making 42-day term loans. The fact that a major Wall Street bank needed the comfort of a loan from the Fed that stretched out for 42 days is a strong indicator that there was a serious liquidity crisis going on in the fall of 2019. Surely the American people deserve better than a news blackout on this critical matter from both Big Media and Congress. 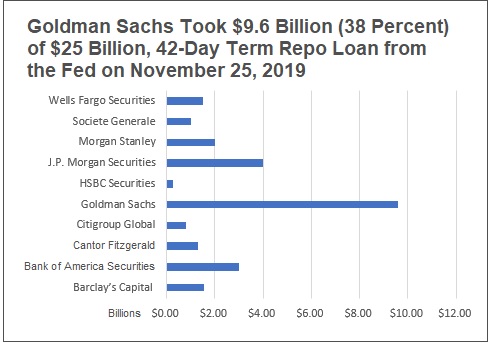 Ponder that when you look at what Goldman Sachs derivatives’ exposure looked like in the financial crisis of 2008.