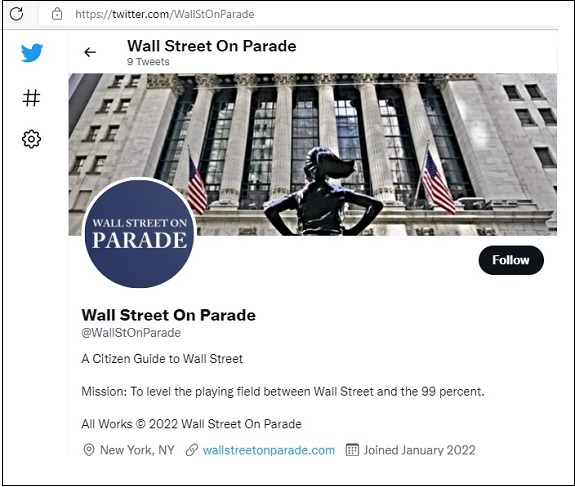 Wall Street On Parade has the following business model: we focus our attention on research and bringing important facts and news about Wall Street and its perpetual sugar daddy, the Fed, to our readers. If our readers feel these articles deserve a wider circulation, we encourage them to link to them on their own social media pages. This spares us the downtime of engaging on social media, thus giving us more time for research. This business model has worked well for us for a decade.

On January 14 we were doing research for an upcoming article when we accidentally stumbled upon a Twitter page called @wallstonparade. It was using our full trademarked name, “Wall Street On Parade,” and displaying our copyright. It was also using our slogan: “A Citizen Guide to Wall Street” and posting sections of our daily articles. Fortunately, and through simply a stroke of luck (or divine intervention) we caught it after only a few days of operation.

We were stunned that someone was brazen enough to think they could get away with the illegal use of a trademarked name. We were further stunned that Twitter didn’t have a system of due diligence to prevent this from happening.

We did some quick research at Twitter and learned that they allow fan sites, as long as strict rules were followed. Those rules included stating emphatically on the Twitter page that you are not the real owner of the name or trademark. This Twitter page seemed to be going out of its way to represent itself as the actual Wall Street On Parade.

We immediately filed a complaint form for trademark infringement with Twitter, supplying all of the requested documentation and proof of ownership. We received an automated response on the same day, January 14, giving us a ticket number for our complaint. A week later, the fake Twitter page was still happily rolling along, violating our trademark and Tweeting out our content. At one point, it even re-Tweeted content from another Twitter user, giving the impression that Wall Street On Parade was endorsing this user.

At another point, a Twitter user replied: “Didn’t know the Martens were on here. Nice.” This indicated that, indeed, our identities had been purloined. The person or persons who had set up the Twitter page made no effort, whatsoever, to explain that they were not the actual Martens.

On January 20, we emailed four executives at Twitter, providing the same documentation that we had provided in the complaint form. We received no response. Our content continued to be posted daily on this fake site with no action being taken by Twitter.

On January 24, we sent individual, overnight letters with signature confirmations requested to Twitter CEO Parag Agrawal and each member of his Board of Directors at their own place of business. Since Twitter is located in San Francisco, which is three hours earlier than East Coast time, we thought we might receive a phone call with a profuse apology yesterday afternoon or evening. No such call came. The fake site, however, was deactivated yesterday.

This is no small matter. U.S. copyright, trademark, patent and intellectual property laws create the framework for innovation to thrive and prosper in America. These laws incentivize every American in the belief that they can own and benefit from what they create. When these laws are undermined, American competitiveness through innovation is undermined.

We will update this article when we receive an appropriate response from Twitter as to how this was allowed to happen, why it took the company so long to respond, and what measures they have put in place to keep it from happening to someone else in the future.