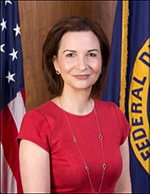 Jelena McWilliams, Chairwoman of the FDIC

The Federal Deposit Insurance Corporation (FDIC) is the agency that prevents financial panics from turning into catastrophic runs on banks by providing taxpayer-backstopped and government guaranteed insurance on deposits, up to $250,000 per depositor. Its leadership and honest governance is thus critically important to every American. So when a nasty public brawl breaks out between the Board of Directors of the FDIC and its Chairwoman, Jelena McWilliams, every American needs to sit up and pay attention.

On Tuesday, Rohit Chopra, President Biden’s nominee who has been confirmed to lead the Consumer Financial Protection Bureau (CFPB), which automatically makes him a member of the Board of Directors of the FDIC, posted at the CFPB’s website serious charges against FDIC Chairwoman McWilliams – effectively stating that she was staging a one-woman coup against her Board and usurping their power to govern the FDIC. Chopra called what she was doing at the FDIC “unsafe and unsound” and “an attack on the rule of law.”

Always at the ready for anyone wanting to shill for mega bank interests, the Wall Street Journal’s opinion page quickly provided ample space for McWilliams to respond. At 6:30 p.m. last evening, it published McWilliams’ rebuttal to her Board members’ charges, which included this irrelevant but homespun tidbit about her arrival in America:

McWilliams was a Trump appointee. She took office as Chairwoman of the FDIC on June 5, 2018. She has a five-year term, which means she could attempt to continue her coup until June 5, 2023 unless her Board makes such a ruckus that she decides to resign.

The battle boils down to this: corporate-funded Republicans in Congress want to keep federal regulators’ hands off their corporate mergers and consolidation of power – including mergers that create ever larger, too-big-to-fail mega banks. On July 9, President Biden released a sweeping Executive Order warning federal agencies against actions that create “excessive market concentration” with specific mention of bank merger activity.

Democratic members of the FDIC Board of Directors are now attempting to adopt new rules for how bank mergers are to be evaluated by the FDIC while McWilliams fights to keep the status quo.

Biden had very good reason to issue his Executive Order. At the end of 1999, the number of federally-insured banks and savings institutions in the U.S. stood at 10,220. By March 31, 2021 that number was 4,978 – a whopping decline of 51 percent. Most of that shrinkage came from merger activity rather than banks failing.

But the dramatic decline in the number of overall banks fails to capture the unprecedented concentration of assets at just four banking behemoths: JPMorgan Chase, Bank of America, Wells Fargo, and Citibank. According to the March 31, 2021 report from the Federal Reserve, those four banks own $9 trillion in assets of the total $22.56 trillion in assets owned by all 4,978 federally-insured banks and savings associations in the country.

And the largest bank in the United States, JPMorgan Chase, has been allowed by its federal regulators to continue to grow its sprawling footprint despite its unprecedented five criminal felony counts since 2014. The bank admitted to all five counts while its Board has kept Jamie Dimon as the Chairman and CEO throughout this crime wave.

Something else very concerning is going on at the FDIC. For unknown reasons, the FDIC’s Inspector General decided to involve itself in an investigation of a broker-dealer’s foreign exchange trading activities. Investigations of foreign exchange trading at a broker-dealer falls under the mandate of the Commodity Futures Trading Commission (CFTC), not the FDIC. Nonetheless, the last paragraph of the press release announcing an indictment of a Barclays trader at its broker-dealer reads as follows:

“The investigation is being conducted by the FDIC’s Office of Inspector General. Assistant Chief Brian Young and Trial Attorney Justin Weitz of the Criminal Division’s Fraud Section are prosecuting the case. The U.S. Attorney’s Office for the Northern District of California provided substantial assistance in this matter.”

The FDIC’s Office of Inspector General indicates on its website that it has “broad jurisdiction to investigate crimes involving FDIC-regulated and insured banks and FDIC activities,” none of which would be relevant to trading at a broker-dealer.

We emailed the FDIC’s Inspector General’s office, asking: “Under what circumstances would the FDIC OIG be authorized to conduct an investigation involving a broker-dealer’s foreign exchange trading, when its public mandate is to investigate matters pertaining to federally-insured banks?”

Given the dubious history and conflicts of interest of other Trump appointees, one can only hope that the FDIC Board of Directors continues to bring sunshine to the American people on what’s occurring at the FDIC.