On Friday, the Dow Jones Industrial Average, S&P 500 Index and Nasdaq Composite, all closed in positive territory. But as the chart above indicates, mega banks on Wall Street closed in a sea of red ink. Citigroup (ticker, “C”) was among the big losers, closing down 1.72 percent, followed by Credit Suisse (CS) down 1.62 percent and Deutsche Bank (DB), down 1.31 percent. JPMorgan Chase (JPM), Barclays (BCS) and Goldman Sachs (GS) closed down less than 1 percent on Friday.

The problem appeared to be the shifting shape of the U.S. Treasury yield curve.

The longer out the yield curve an investor goes, the higher the yield – unless the yield curve flattens or inverts. That typically means that the Fed has started to hike interest rates, or is expected to begin hiking interest rates, and the market perceives that the Fed is going to over-shoot and bring on a recession. Thus, short rates rise because the Fed is in a tightening mode and longer rates fall because market participants foresee that tightening leading to slower or even negative growth in the U.S. economy.

If you get on the wrong side of that trade, you can lose your shirt. Bloomberg News reported on Friday that hedge funds had lost significant sums in wrong-way interest rate bets. Other media outlets, without naming the hedge funds, also reported that interest rate bets had soured at hedge funds. That may account for the sea of red in the shares of the mega Wall Street banks on Friday. Those banks provide leveraged loans to hedge funds via their prime broker operations.

The U.S. yield curve has not yet inverted but it’s flattening, with a notable amount of that flattening occurring last week.

But as of last Friday, the yield curve had flattened to such a degree that the spread between the 5-year note and 30-year bond had shrunk to just 0.7478 percent.

Also unnerving rate traders was central bank talk last week from both the BOE (Bank of England) and the Bank of Canada, that rate hikes are coming sooner than previously expected. Brazil’s central bank lifted its key interest rate by 1.50 percent on Wednesday – a half point more than anticipated by market watchers and the largest percentage increase since 2002.

If short U.S. Treasury rates continue to spike this week, it could mean that hedge funds have more short-term Treasury notes to dump in order to unwind their underwater trades.

Last week’s action in the yield curve will bring increased attention to the two-day policy meeting by the Federal Reserve this week, which will conclude on Wednesday. The Fed is expected to announce on Wednesday afternoon a specific timetable for tapering its monthly purchases of Treasury securities and agency Mortgage-Backed Securities (MBS), which currently amount to a combined $120 billion monthly. Fed Chair Jerome Powell’s statement as to the timing of any interest-rate hike and his views on inflationary pressures can also be expected to move markets. 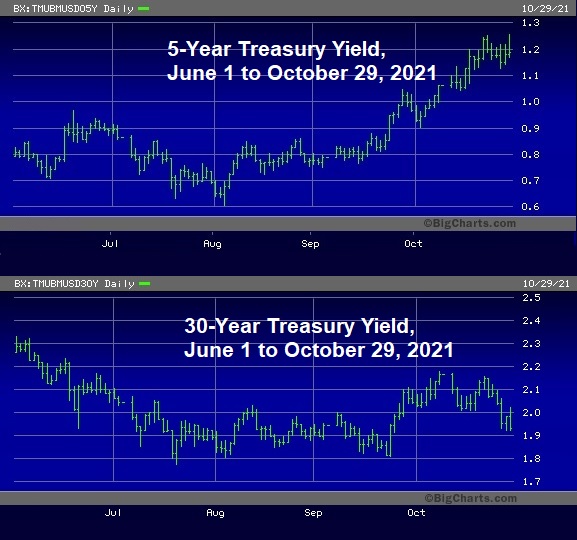