At 3:12 P.M. Yesterday, the Stock Market Changed Its Mind on another Four Years of Jerome Powell and Plunged 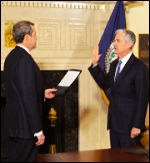 Fed Chair Jerome Powell now finds himself in the same position as Morgan Stanley’s Howie Hubler and JPMorgan’s Bruno Iksil: he’s got a big trade on and no exit plan. The problem for the U.S. economy is this: Hubler and Iksil were gambling with billions of dollars. Powell is gambling with trillions of dollars. Powell’s Fed has effectively become the Whale in the U.S. debt market.

Powell was last sworn in as Fed Chair on February 5, 2018. Five days earlier, the securities held on the Fed’s balance sheet totaled $4.2 trillion. As of last Wednesday, that figure stood at $8.179 trillion, thanks to Powell’s endless purchases of U.S. Treasury securities and agency mortgage-backed securities (MBS). Making this situation even more dicey, the Fed bought these debt securities with money it creates out of thin air. The U.S. taxpayer is on the hook for 98 percent of the Fed’s balance sheet.

Powell likes to tell reporters at his press conferences that the Fed has only “lending powers and not spending powers.” Powell says this to appease academics and critics who believe he is violating the Federal Reserve Act by becoming the buyer-of-last-resort for Wall Street’s excesses instead of sticking to the Fed’s role as lender-of-last-resort to the banking system.

Last year, the Fed rolled out many of the same emergency lending facilities it had used during the 2008 crash and its aftermath.

The Fed has now stated that it plans to begin tapering its purchases of $120 billion a month in debt securities, a tactic it has used to keep interest rates artificially depressed. Unfortunately, that’s not an exit plan. The Fed effectively has no exit plan to wean Wall Street off its easy money policies without creating massive ruptures in the stock market, leading potentially to more Fed bailouts and an even larger balance sheet at the Fed.

There was a small taste of what’s to come in Powell’s second term as Fed Chair yesterday afternoon.

At 3:12 p.m. yesterday, the reality of Powell’s lack of an exit plan suddenly registered in the minds of traders across Wall Street. The Dow Jones Industrial Average began to plunge after rallying in the morning on the news that President Biden had nominated Powell for another four-year term as Fed Chair.

All in all, yesterday was not a vote of confidence in Powell’s stewardship going forward.