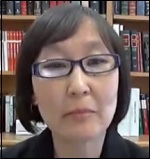 Yesterday, President Biden took the bold step of nominating Saule Omarova to head the Office of the Comptroller of the Currency (OCC), a top federal bank regulator. Omarova is a Law Professor at Cornell and has written extensively on systemic risk containment. Prior to joining Cornell in 2014, Omarova was Associate Professor at the University of North Carolina School of Law. Prior to her academic career, Omarova worked for the corporate law firm, Davis Polk & Wardwell, in their Financial Institutions Group. In 2006-2007, she served at the U.S. Department of the Treasury as a Special Advisor for Regulatory Policy to the Under Secretary for Domestic Finance.

Omarova represents a triple threat to the insidious behavior of mega banks on Wall Street: she has an in-depth knowledge of how they operate; she is not timid about explaining it to investigative bodies in the U.S. Senate; and, as head of the OCC, she would have a bully pulpit to speak to the American people directly about the urgency of reining in the systemic risks on Wall Street.

Omarova has already demonstrated to Wall Street that it should not underestimate her. In 2013 and 2014, the U.S. Senate took testimony from witnesses on the matter of the mega banks on Wall Street quietly buying up unprecedented amounts of physical commodities and then trading on their inside information of those markets. Witnesses pointed to the Federal Reserve as aiding and abetting these egregious manipulations by its rewriting the rules governing such ownership interests.

One of the key witnesses that testified against these abuses was Omarova, then an Associate Professor at the University of North Carolina School of Law.

Omarova provided testimony indicating that Morgan Stanley had constructed power plants in Georgia, Alabama and Nevada, allowing it to become a major electricity seller. According to Omarova, in 2006 Morgan Stanley had acquired “full ownership of Heidmar Inc., a Connecticut-based global operator of commercial oil tankers. Although Morgan Stanley sold 51% of equity in 2008, it still retained a 49% stake.” Omarova explained that “Heidmar operates a fleet of more than 100 double-hull vessels and provides transportation and logistics services to major oil companies around the world.”

Morgan Stanley had plenty of company in buying up physical commodities. According to Omarova, Goldman Sach’s subsidiary, GS Power Holdings LLC, “holds another prized asset in Goldman’s commodities empire: Metro International Trade Services LLC (‘Metro’). Metro is a metals warehousing company that owns and operates nineteen warehouses in the Detroit metropolitan area, as well as warehousing facilities in Europe and Asia. By acquiring Metro in February 2010, Goldman gained control of one of the largest metals warehouses in the global network of storage facilities approved by the LME [London Metal Exchange].”

Omarova indicated in her written testimony that “Coca-Cola complained that Goldman intentionally created a bottleneck at its Metro warehouses in order to drive up market prices for aluminum and sell their own metal stock at the inflated price.”

Omarova next provided a detailed analysis of how JPMorgan Chase (JPMC) had expanded into physical commodities by buying up assets from distressed firms:

“In 2008, JPMC bought the key assets of Bear Stearns, an independent investment bank on the verge of failure. As part of the deal, JPMC acquired commodity trading assets and operations, including a significant network of electric power generating facilities owned by Arroyo Energy Investors L.P., a commodities subsidiary of Bear Stearns.

“After acquiring Bear’s energy assets, JPMC’s CEO Jamie Dimon and the head of commodities operations Blythe Masters began aggressively expanding the firm’s physical commodities business. In 2008, the firm started trading physical oil and looking at ‘more ways to boost its presence in energy markets.’  In addition to hiring more people in its commodities and energy trading and investment team, JPMC started drawing plans for strategically expanding its metals and energy operations in Asia.

“In November 2010, JPMC also bought RBS Sempra’s North American power and gas business, which added further strength to the operations the firm inherited from Bear Stearns. This purchase propelled JPMC into the top tier of natural gas and power marketers in North America…

“In addition to oil, gas, and electric power assets, JPMC’s crisis-driven acquisitions allowed the firm to become a significant force in global markets for metals. In late 2011, JPMC bought a stake in LME from the bankrupt futures firm, MF Global, and became the exchange’s largest shareholder. As part of its Sempra deal, JPMC acquired control of Henry Bath, a UK-based metals warehousing company that owns and operates one of the largest LME-approved global metal storage networks.”

The Senate’s Permanent Subcommittee on Investigations, then chaired by the late Senator Carl Levin, conducted a two-year investigation into Wall Street banks owning physical commodities. At the conclusion of its investigation, it held two days of hearings on November 20-21, 2014. (Omarova also testified at that hearing.) At the opening of the second day of the hearings, Senator Levin said this:

“…in recent years, Goldman, JPMorgan, and Morgan Stanley have been heavily involved in a wide range of physical commodity activities and businesses, including building multi-billion-dollar stockpiles of aluminum, copper, oil, and natural gas, and running businesses like power plants, oil and gas storage and pipeline companies, and commodity warehouses. Now, when I say ‘banks,’ by the way, it is shorthand to cover both federally insured banks and their holding companies.

“The simultaneous trading of commodities in the physical and financial markets raises concerns related to market manipulation and unfair trading.

“In 2013, the Federal Energy Regulatory Commission fined JPMorgan $410 million after finding that JPMorgan commodity traders used power plants to execute manipulative bidding strategies that produced profits for the bank at the expense of electricity customers. We will hear more about that and other electricity manipulation cases today.

“Yesterday, we also heard about a warehouse company, purchased by Goldman Sachs and overseen by a board consisting entirely of Goldman employees, that manipulated its warehouse operations in a way that impacted the price of aluminum for consumers, while at the same time Goldman was trading aluminum-related financial products. The Goldman-controlled board of directors approved the merry-go-round transactions that have done much harm to consumers and aluminum markets.

“Yesterday’s hearing also disclosed that Goldman employees were given access to valuable non-public information from the warehouse company related to aluminum, information that could have been used to benefit Goldman’s aluminum trading. Both the warehouse company and Goldman had information barrier policies in place at the time, but given the recent history of banks improperly sharing information to manipulate electricity, LIBOR, and foreign exchange rates, reliance on voluntary policies at banks that have an economic interest in ignoring those policies is simply not enough protection for consumers.

The late Senator John McCain had harsh words at the hearing for the Federal Reserve’s role in all of this, stating:

“While the Federal Reserve claims in its written statements that it has monitored this situation and explored possible actions, it has clearly not done enough to prevent harmful commodity activities by the banks. And the persons who ultimately are harmed by all of this, of course, is the average consumer, the average citizen, who has no knowledge, unless it paid attention to this hearing, of the extent of the manipulations that have been carried out by the largest financial institutions in America and, indeed, probably the world.”

The hearings led to years of the Federal Reserve issuing proposed new rules on the matter. During that period, some of the physical commodity holdings were sold by the mega banks. It is unclear where things stand today after four years of deregulation under the Trump administration.

Our report on July 15 of JPMorgan Chase’s involvement in buying up power plants and critical infrastructure in 22 countries is not a promising sign.

There is no doubt that Wall Street’s lobbyists are already working overtime on lining up votes against the Senate confirmation of Omarova. The problem for Wall Street is that Omarova would be the first woman, and the first person of color, to lead the OCC in its 158-year history. Wall Street lobbyists will therefore need a delicate dance if they are to succeed in derailing this nomination.