U.S. Banking System Has a $168 Trillion Nightmare Looming. It Was Ignored in Written Testimony for Today’s Senate Banking Hearing 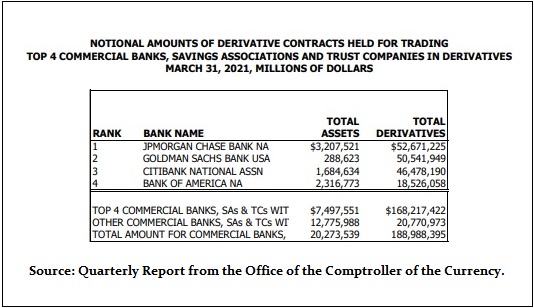 Risky derivative bets made by the mega banks on Wall Street, offloaded onto inadequately capitalized counterparties, were at the core of the collapse of the U.S. financial system in 2008. That collapse left millions of Americans without jobs, which led to millions of families and traumatized children losing their homes to foreclosure. The bank bosses got their million-dollar bonuses from the taxpayer bailouts and the Federal Reserve secretly pumped in over $29 trillion over 31 months to shore up the failing trading houses on Wall Street and their foreign derivative counterparties.

Wall Street banks have rebuilt that derivatives doomsday machine today – a $168 trillion monster concentrated at four mega banks on Wall Street. But as we read through dozens of pages of written testimony submitted by witnesses for today’s Senate Banking hearing, the word “derivative” did not appear once.

At 10:00 a.m. the U.S. Senate Banking Committee will hold a hearing titled “Oversight of Regulators: Does our Financial System Work for Everyone?” This is clearly a nonsensical question to which every American who hasn’t been living off the grid since 2008 already, painfully, knows the answer.

SEC Chair Gensler gave a speech on July 21 in which he explained that 11 years after the Dodd-Frank financial reform legislation was passed in 2010 during the Obama administration, the final rules to regulate the derivatives (swaps) markets have yet to be fully implemented. He also explained how oversight of derivatives has been bifurcated, stating:

“When Congress decided to bring reforms to the overall swaps market, they assigned authority over security-based swaps to the SEC. They assigned the bulk of the swaps market —including interest-rate, energy, agricultural, and other commodity-based swaps — to our sister agency, the Commodity Futures Trading Commission….”

This is what Gensler does not explain in his speech. The Dodd-Frank legislation did not envision derivatives remaining at the federally-insured, deposit-taking commercial banks of America. Dodd-Frank contained what was called the “push out rule” where the derivatives would move out of the federally-insured bank and into another unit of the bank holding company that could be wound down without a taxpayer bailout in case of insolvency.

But Citigroup, the recipient of the largest taxpayer and Fed bailout in the 2008 crisis, used its lobbyists to force the repeal of that part of Dodd-Frank in December of 2014.

As a result, if you flip open the most recent quarterly trading and derivatives report from the Office of the Comptroller of the Currency, you will read the following state of affairs as of March 31, 2021:

“The four banks with the most derivative activity hold 89.0 percent of all bank derivatives…”

Those four banks are not the investment banking units of the Wall Street mega banks. They are the federally-insured, taxpayer-backstopped, commercial banking units of these Wall Street behemoths. Per the chart above, JPMorgan Chase Bank, Goldman Sachs Bank USA, Citibank N.A. (the federally-insured unit of Citigroup), and Bank of America are sitting on a total notional (face amount) of $168 trillion in derivatives or 89 percent of the $189 trillion at all banks.

This is concentrated, systemic risk on steroids and deserves an immediate, separate hearing by the Senate Banking Committee.

If you want a more thorough understanding as to why Congress has not intervened since Citigroup and its lobbyists overturned the “push out rule” in 2014, we recommend watching the Senate floor speech delivered by Senator Elizabeth Warren at the time Citigroup pulled this off in 2014. (See video below.)