Fed Chair Powell Got a Lesson in Economics from Senator Lummis: U.S. Households Are Sitting on the Highest Level of Bank Deposits in the Past 68 Years 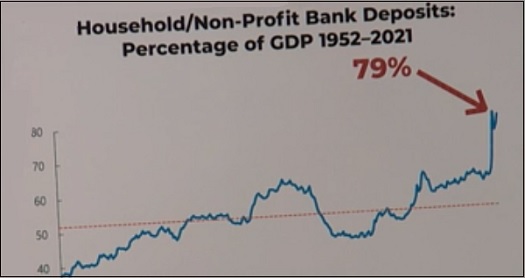 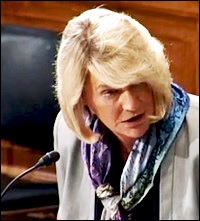 Senator Cynthia Lummis (R-WY) is the first woman from Wyoming to ever serve as a United States Senator and she has a coveted spot on the Senate Banking Committee. Lummis holds three degrees from the University of Wyoming — in Animal Science, Biology and Law. Today, during a Senate Banking Committee hearing with Fed Chair Jerome Powell, Lummis proved she knows a thing or two about economics and the money supply.

Lummis came armed with the above oversized chart for her colleagues and Powell to ponder. Lummis told Powell the following:

“M2 data shows that deposits and close substitutes held by households have generally averaged 51 percent of GDP from 1952 to 2021. But then data from the end of Quarter 1 of 2021 shows that households are sitting on deposits and close substitutes of approximately 79 percent of GDP today. So that’s roughly 28 percent [increase] or trillions of dollars above the historic average.

“So going back to 1952 there’s never been a higher percentage of household deposits to GDP. Monetary policy has also been highly accommodative over the last 16 months to the tune of 32 percent increase in the M2 money supply.

“So I haven’t heard anybody talking about this hidden stimulus. And when households start to spend this cash, combined with the enormous liquidity already out there, it seems there’s real potential for inflation to continue to overshoot. We’ve already seen it this week as the core consumer price number was nearly double what economists had predicted.”

Powell said the Fed is keeping a close watch on the inflation numbers to see when it might be appropriate to begin tapering its asset purchases. Currently, the Fed is buying $80 billion a month in U.S. Treasury securities and $40 billion a month in agency Mortgage Backed Securities (MBS). Powell said the other thing he would point out is that there are still a lot of unemployed people out there and he thinks it’s still appropriate for the Fed to remain accommodative and supportive of economic activity. He paused briefly and then added: “for now.”

So, Senator Lummis is correct. There are “trillions of dollars” – $4.22 trillion to be exact – sitting in bank deposits that wasn’t there two years ago.

The biggest danger related to these trillions of dollars in excess deposits is what the mega Wall Street banks that are holding the bulk of that money do with it in the meantime. (See The Stock Market Is Just One Hedge Fund Blowup Away from a Crash. Here’s the Ugly Math.)