JPMorgan Chase Has Exited 15.7 Million Square Feet of U.S. Office Space Since the Crash of 2008 But Somehow Managed to Grow its Assets by 62.9 Percent 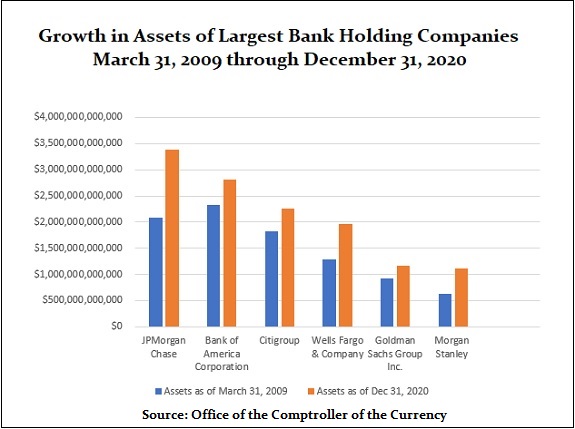 Jamie Dimon, Chairman and CEO of JPMorgan Chase, has found a new magic hat trick: how to shrink and grow at the same time.

Between March 31, 2009 and December 31, 2020, the assets at JPMorgan Chase’s bank holding company grew by an astonishing $1.3 trillion or 62.9 percent according to data archived at the Office of the Comptroller of the Currency (OCC).

That stands in striking contrast to the next largest bank holding company in the U.S., Bank of America, whose assets grew by just $496.2 billion or 21 percent over the same period.

The first thought that might come to your mind is that perhaps this staggering growth in assets came as a result of the Federal Reserve allowing JPMorgan Chase to purchase Bear Stearns and Washington Mutual during the 2008 Wall Street crash. That can’t be the reason, however, because the Bear Stearns purchase occurred in the spring of 2008 and the purchase of Washington Mutual took place on September 25, 2008. We used the date of March 31, 2009 to avoid any confusion over these two acquisitions.

Adding to the mystery, JPMorgan Chase has somehow achieved this asset alchemy while dramatically shrinking its physical footprint in the United States.

And it’s not going to make commercial real estate investors in New York City too happy to learn that New York City is where JPMorgan Chase has exited a sizeable amount of space, going from 13 million square feet as of December 31, 2008 to just 9.1 million square feet as of December 31, 2020, according to its latest 10-K filing with the SEC. That’s a notable decline of 30 percent.

For what JPMorgan Chase, the largest federally insured bank in the U.S., might be doing with all of these securities, see our report: The Stock Market Is Just One Hedge Fund Blowup Away from a Crash. Here’s the Ugly Math.

JPMorgan Chase’s 13F filing with the SEC (securities in its portfolio) actually shows its securities at a market value of $680.6 billion as of December 31, 2020. We’re not sure why there is this discrepancy but if the 13F is a more accurate tally, that would mean that its “Securities” have grown by a half trillion dollars since the crash of 2008.

Not to put too fine a point on it but depository banks gambling in the stock market is what caused the 1929-1932 crash that ushered in the Great Depression. Tragically, federal regulators and Congress have allowed the same dynamics of greed and recklessness to permeate today’s Wall Street.