Senator Sherrod Brown (D-OH) delivered these remarks at the opening of the Senate Banking Committee hearing on March 4, 2021. 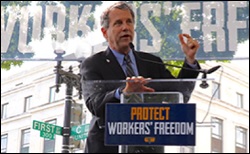 “The economy isn’t physics – it’s not governed by scientific laws outside our control. It’s made up of people making choices about our values and what kind of society we want to live in. Despite what we’re constantly told on TV, most Americans share a lot of the same values – they want an economy that’s fair and just, where hard work pays off for everyone, no matter who you are or what kind of work you do, and where everyone has the economic security to raise a family and retire with dignity.

“But when you look at our economy, it doesn’t reflect the society most of us want. You can’t look at decades of growing productivity, with workers getting a smaller and smaller share of the profits they create, and think the economy looks fair. You can’t look at a racial wealth and income gap that has barely budged since we passed the Civil Rights Act, and think the economy looks just, or that we all have equal opportunity. You can’t look at the millions of Americans whose hard work doesn’t even pay the bills, while corporate profits go up, CEO pay soars, and stock buybacks and dividends explode, and think that this economy reflects our values.

“This state of affairs didn’t happen on its own, and it wasn’t just the invisible hand of the markets. For decades, Wall Street interests – big banks, hedge funds, private equity firms, and insurance companies – have been calling the shots – through their lobbyists, through rigged rules, through union-busting. We’ve left it to them to shape our entire economy, and make choices about our values and what kind of society we live in.

“For decades, Wall Street has rewarded the companies that squeeze their workers the hardest – companies that cut wages, cut retirement benefits, cut corners on worker safety. When companies lay off workers, cut paychecks, or subcontract work to lower-paying companies with fewer benefits, their stock price goes up – and Wall Street calls it “cost cutting.” We have allowed a system to take root that treats American workers as a commodity, a cost to be minimized – instead of the engine behind all our businesses’ success.

“They do it so Wall Street can funnel more and more of the profits that workers create to CEOs and shareholders. And instead of investing those profits in something productive, they’ve used that money for reckless speculation that drove booms and busts, resulting in real estate crashes and the dot-com bubble. And when all of that didn’t make them rich enough, they came up with the idea for credit default swaps and collateralized debt obligations. It was Wall Street that targeted workers who were struggling to make ends meet with subprime mortgages – predatory loans that stole the equity workers had saved up in their homes.

“Wall Street’s 2008 crisis cost the economy tens of trillions of dollars and destroyed 53 percent of Black wealth in the country. Millions of families lost their homes and are still trying to recover. Wall Street got a bailout. Then Wall Street found a new way to get paid: fund the payday and auto title lenders and debt collectors that targeted families struggling to get by in what was left of the economy.

“Even after all of that, some people, including a whole lot of people who’ve been running the Senate, think that we should let Wall Street keep dictating our economy – and by extension, the lives of everyone who gets their income from a paycheck, not a stock portfolio. They claim they just want “markets to decide,” but when the market isn’t fair, that just means putting Wall Street in charge.

“It’s the same attitude that lets corporations run ad campaigns calling their workers ‘essential,’ but then spends their profits on stock buybacks and CEO bonuses rather than a living wage or the protective equipment workers need to avoid a deadly virus. Or that prompts Amazon to post a ‘Black Lives Matter’ banner on its website, while unleashing every union-busting tactic in the book to undermine Black workers organizing for better working conditions in Alabama.

“If we want a fair and just society, with a growing middle class that everyone has the opportunity to join, we have to stop letting Wall Street run the economy. We can’t rely on quarterly earnings reports to tell us whether workers deserve a decent living. For too long, we’ve allowed Wall Street’s phony populist allies to stoke fear and place blame and divide us by race and religion and region. We know why they do it – to distract from how they’ve been keeping all the profits for themselves.

“But this zero-sum view of the economy hurts everyone. We have the largest economy on earth, with vast resources and talent and ingenuity. If we stop siphoning off so much of our prosperity to the tiny sliver of people at the very top, not only is there enough to go around for everyone – but when we unleash all workers’ talents and give them some more economic security, we’ll create even more economic growth.

“We all learn in elementary school about Dr. Martin Luther King Jr.’s fight for civil and human rights. But we don’t talk about his fight for economic rights enough – and how you can’t fight for one without the other. We can’t forget that Dr. King was assassinated in Memphis while fighting for some of the most exploited workers in the country, sanitation workers – fighting for their civil rights and workers’ rights. As he put it: ‘What does it profit a man to be able to eat at an integrated lunch counter if he doesn’t earn enough money to buy a hamburger and a cup of coffee?’ If we want to take on economic inequality and shrink the racial wealth gap, then we need to build an economy based on the dignity of work.

“That means paying all workers a living wage, giving them power over their schedules, providing good benefits and safety on the job, and letting them organize a union. That means everyone gets a fair share of the wealth they create. That means building an economy that reflects our values – not Wall Street’s values – and the kind of society we want to live in.”