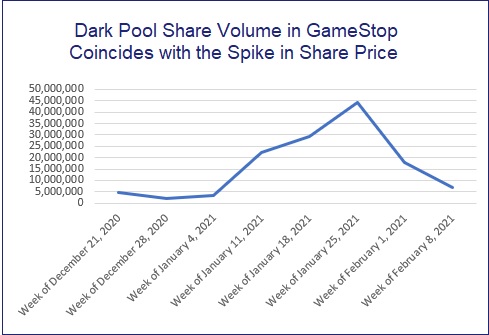 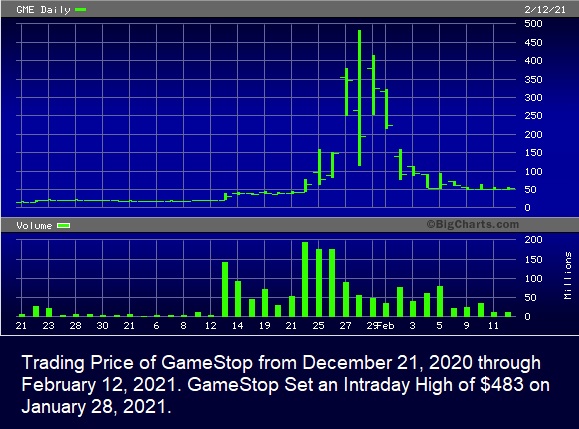 If the Securities and Exchange Commission is not taking a hard look at the involvement of Dark Pools owned by the biggest banks on Wall Street during the meteoric spike in the price of GameStop shares in late January, then we have to conclude that it doesn’t want to actually get at the truth.

Wall Street On Parade spent one hour combing through the Dark Pool trading data available through Wall Street’s self-regulator, FINRA, and the evidence of Dark Pools’ involvement in the dodgy trading in GameStop is striking. (GameStop is a New York Stock Exchange listed company and it has been trading like a penny stock operated out of a boiler room – raising questions about the integrity of U.S. markets.)

FINRA only provides Dark Pool data lumped together for an entire week, instead of on a daily basis. But even using the less-than-transparent weekly data, the correlation is striking.

There is something else quite notable in what the Dark Pools were doing under the cover of darkness. During the week of that big spike in share price, the week of January 25, two of the biggest names on Wall Street used their Dark Pools to trade big amounts of GameStop shares. UBS’s Dark Pool ranked number one in both share volume and the number of trades. It traded 10.66 million shares of GameStop in a total of 217,118 trades. One of JPMorgan Chase’s Dark Pools, JPM-X (the SEC allows it to have two Dark Pools) ranked number two for the week with 5.15 million shares of GameStop traded in a total of 30,835 trades.

But here’s what doesn’t make sense about those numbers. Both UBS and JPMorgan Chase focus on institutional and high net worth clients. If you divide the January 25 weekly share volume for UBS by the number of trades, it works out to an average trade size of approximately 49 shares – an odd lot. If you do the same for JPMorgan’s Dark Pool, it works out to an average trade of 167 shares.

These are institutions that should be trading in lots of 1,000 to 10,000 shares – which raises the question, what was really going on here?

GameStop is a brick-and-mortar video game retailer with a very uncertain future. The company reported negative earnings for 2018, 2019 and 2020.