Death and Mayhem Inside the Capitol Building and the Stock Market Gains 437.8 Points. Why? 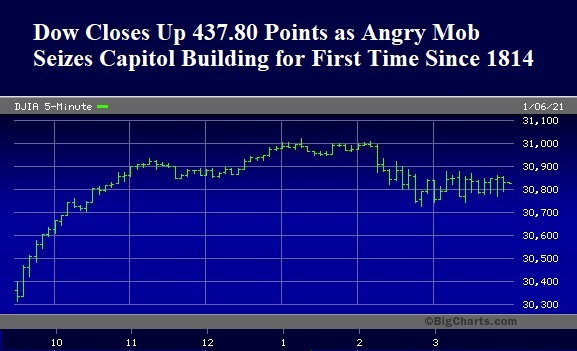 As a violent mob of Trump’s citizen militia scaled walls, broke windows and seized control of the Capitol building yesterday around 2 p.m., the Dow Jones Industrial Average set a new intraday high of 31,022.65. It gave up very little by the 4 p.m. close, gaining 437.8 points on the day.

The Trump operatives were attempting to stop Congress from confirming President-elect Joe Biden’s electoral win. Dressed in paramilitary clothing or jeans and red MAGA hats, the mob overpowered the Capitol Police inside and outside the building, gaining access to both Senate and House chambers and lawmaker offices, including the office of the Speaker of the House, Nancy Pelosi.

Jamie Stiehm, a US political columnist, was inside the Capitol building and reported the following for the BBC:

“I went inside to the House of Representatives and up into the press gallery, where we were assigned seats, looking down at the rather somber gathering. Speaker Nancy Pelosi was holding the gavel, and keeping people to their five-minute statements.

“As we went into the second hour, all of a sudden we heard breaking glass. The air began getting fogged. An announcement from the Capitol Police said, ‘An individual has breached the building.’ So everyone looked around and then it was business as usual. But after that, the announcements kept coming. And they were getting more and more urgent…The police didn’t seem to know what was happening. They weren’t coordinated. They locked the chamber doors but at the same time, they told us we would have to evacuate. So there was a sense of panic…There was a sense of ‘nobody’s in charge here, the Capitol Police have lost control of the building, anything can happen.’ ”

An excellent report by Emilie Munson for Hearst Newspapers on how House Reps, Senators and press were eventually evacuated by Capitol Police through tunnels is provided here. The Capitol building was not declared secured by the Capitol Police until approximately 5:50 p.m. At around 8:00 p.m. Congress resumed its deliberations and confirmed the Biden win after hours of debate.

Grisly images of the mayhem at the Capitol are available at Bloomberg News here. According to CNBC, four people were left dead as a result of the riots. A young, unidentified woman was shot inside the Capitol building according to Capitol Police and died of her injuries. Another woman and two men died from “medical emergencies,” according to the CNBC report, which was based on information provided at a press conference by Washington, D.C. Police Chief Robert Contee.

CNBC also reported that “At least fourteen police officers sustained injuries with multiple [officers] still in the hospital.” One officer, whose photo of being assaulted by the mob is included in the link to Bloomberg photos above, sustained serious injuries.

According to multiple news reports, this was the worst invasion of the Capitol building since 1814, during the War of 1812 with the British.

While all of this mayhem and insurrection played out on television screens around the world, and world leaders were forced to confront the possibility that there would not be a peaceful transition to a new President in the United States, the Dow Jones Industrial Average yawned at the chaos. This is certainly not a normal reaction for the U.S. stock market, especially since it’s already in bubble territory.

There was the distinct impression among market watchers that an invisible hand was once again intervening to prevent a crash in the market as the violent events unfolded. Thoughts turned immediately to Treasury Secretary Steve Mnuchin’s Exchange Stabilization Fund which, under the law (31 U.S.C. §5302) “may deal in gold, foreign exchange, and other instruments of credit and securities the Secretary considers necessary.” Conveniently, the Exchange Stabilization Fund has grown from $94.3 billion in assets prior to Trump taking office to $682 billion as of September 30, 2020.