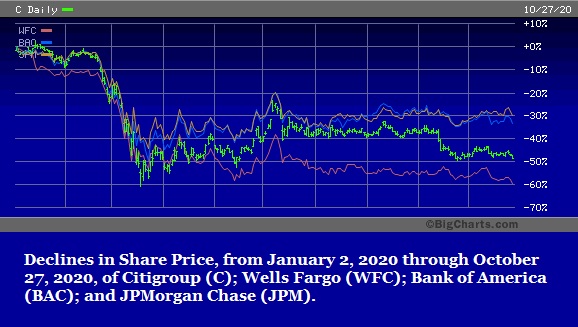 At 9:10 a.m. this morning, Dow futures were showing a loss of 623 points, signaling another nasty open for the stock market following Monday’s plunge of 650 points and a 222-point loss yesterday. The sell-off in futures this morning is being blamed on the rising number of COVID-19 cases in Europe and the U.S. and the failure of the U.S. Congress to pass a stimulus bill to cushion the coming economic fallout.

But tomorrow morning will bring a report showing a huge pop in Gross Domestic Product (GDP) for the third quarter, and the Trump campaign can be expected to spin it into a rallying cry at campaign events. At 8:30 a.m. tomorrow, the Bureau of Economic Analysis, a unit of the U.S. Department of Commerce, will report how the U.S. economy grew from July 1 through September 30. According to the highly reliable Atlanta Fed’s GDPNow estimate, that figure should come in at the 30 percent range.

The Trump campaign can be expected to herald that number as the fastest growth in U.S. history. But it should be remembered that it comes on the heels of the second quarter number, which registered the largest quarterly loss in GDP in U.S. history, a decline of 31.4 percent. That monster decline resulted from business closures and job losses from the pandemic, and the resultant pullback in spending.

Both of the headline numbers need to be taken with a grain of salt. GDP is reported at an annualized rate, that is, what the quarterly percentage would be if it lasted for a full year. The loss in the second quarter of 31.4 percent annualized, actually equates to 9 percent on a quarterly basis. That’s still a big deal and on a par with a great depression.

Much of the improvement in the third quarter results from businesses reopening and the financial stimulus from the $1.8 trillion CARES Act, which was signed into law on March 27. We are already one month into the fourth quarter with no additional stimulus bill. So that will produce a drag even if Congress does eventually pass another stimulus package. This coming economic slowdown is likely what the stock market is reacting to this week.

The U.S. is a consumer-based economy where consumer spending accounts for roughly two-thirds of GDP. If states don’t get help soon from a federal stimulus bill, there will be layoffs of teachers, firemen and police. If unemployed workers don’t get an extension of unemployment benefits, that will result in extreme human suffering as well as a hit to consumer spending, which will trigger more job losses and an escalating contraction in consumer spending.

The U.S. Department of Labor reports the following: “The total number of people claiming [unemployment insurance] benefits in all programs for the week ending October 3 was 23,150,427…” How does that compare with the same week in 2019? It’s 16.6 times higher. There were only 1,393,973 people claiming unemployment benefits for the comparable week in 2019. That’s the size of the hole the U.S. economy has to climb out of.

Let those figures sink in for a few moments and then think about the thousands of new layoffs being announced by the airlines, and theatres, and other businesses.

And, finally, as the chart above indicates, some of the largest banks in the U.S. that hold the lion’s share of deposits that support loans to the U.S. economy are not looking like the “source of strength” that the Federal Reserve Chairman, Jerome Powell, keeps reassuring us they are. You can believe your own eyes and the data on that chart (which comes directly from a Dow Jones company, MarketWatch) or you can believe the Fed.

Never in the history of the United States has there been a greater need for a comprehensive national plan to address this crisis.