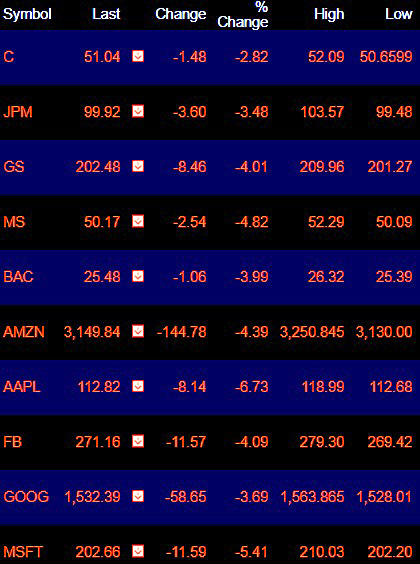 The mega banks on Wall Street joined the tech wreck yesterday as illustrated on the chart above. The selloff in these banks can be attributed to, primarily, the selloff in the price of crude oil – which suggests the banks will be forced to increase loan loss reserves as the threat of more bankruptcies among debt-strapped U.S. oil producers increases.

Domestic crude oil, known as West Texas Intermediate or WTI, had a $41 handle on Friday on the Nymex. Yesterday, that turned into a $36 handle – a decline of 12 percent from Friday. A WTI handle below $40 is panic-time for U.S. independent oil producers who are deep in debt and struggling to avoid bankruptcy.

The big summer driving season that was expected to boost crude demand was officially over the day after Labor Day. But, in fact, a big surge in demand from summer travel had never really materialized because a family doesn’t drive to a vacation destination if they’re afraid to stay in a hotel because of the pandemic. Add the decline in demand for jet fuel because people are afraid to breathe the air of strangers on airplanes and you begin to see a real problem with oil demand going forward.

Into this bleak outlook for the price of oil comes the always reliable “gift” from the Saudis in a time of crisis. According to an article at Bloomberg News over the weekend, Saudi Arabia has cut its price on crude to customers in both Asia and the U.S., raising the specter of a renewed oil price war between the Saudis and Russia. (See our reporting from March: What’s the End Game in the Saudi Oil Price War?)

According to a March report from MarketWatch, using research from CreditSights, Citigroup has the largest loan exposure to the energy sector with an outstanding loan balance as of December 31, 2019 of $19.4 billion. Other big bank loan exposures to the energy sector were: Wells Fargo at $13.56 billion; Bank of America at $13.36 billion; and JPMorgan Chase at $13.06 billion.

Curiously, the CreditSights research showed Morgan Stanley with just $3.46 billion in loan exposure to the energy sector, which represented just 0.4 percent of its assets. But, as you will note on the chart above, Morgan Stanley’s share price lost more than its peers yesterday, declining 4.82 percent. That outsized decline is likely because of Morgan Stanley’s exposure to derivatives – some of which are likely to be in oil futures.

According to the Office of the Comptroller of the Currency, Morgan Stanley had $35.6 trillion notional (face amount) in derivatives as of March 31, 2020. (See the second Table 2 in the Appendix here.)