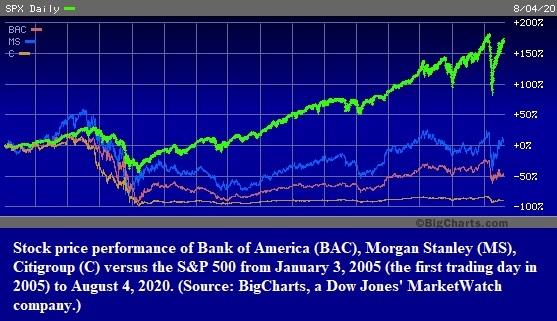 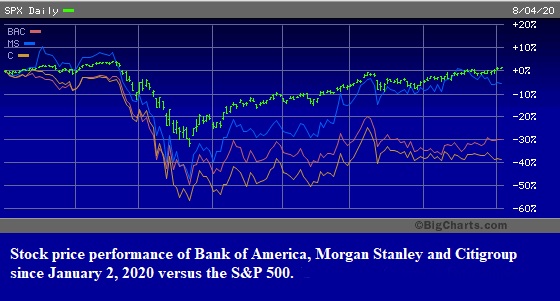 Federal Reserve Chairman Jerome Powell wants Americans to believe that the mega banks on Wall Street that hold trillions of dollars in federally-insured deposits, while peddling everything from high-risk derivatives to junk bonds to precious metals, “are a source of strength” during this economic downturn. The big problem for the Fed is the above two charts.

The chart data comes from BigCharts at MarketWatch, owned by Dow Jones & Company. According to the first chart, Citigroup has lost 90 percent of its share value since January 3, 2005. (It dressed up its share price in 2011, doing a 10-for-1 reverse stock split, meaning shareholders who had previously owned 100 shares, now owned just 10 shares at a higher price.)

Bank of America’s share price has lost half of its value and Morgan Stanley’s share price has been essentially flat for a decade and a half. Compare that to the Standard & Poor’s 500 (SPX) which is up more than 150 percent.

The question, of course, is what is it we are exactly looking at in the first chart. Is it that Fed bailouts create moral hazard? Is it that Fed supervision of Wall Street banks has been the road to disaster for bank shareholders? Is it that Congress should not be allowing the Fed to funnel trillions of dollars into cratering banks operating as a rigged Wall Street casino without any oversight from Congress?

In fact, the first chart demonstrates that all three things are true.

The second chart dispels the notion that Fed Chair Jerome Powell has gone out of his way to repeat like a scripted parrot: that the mega banks on Wall Street, under the dutiful supervision of the Fed, “are a source of strength” as America experiences the worst economic collapse since the Great Depression.

The second chart shows that just since the beginning of this year, Citigroup’s stock is down 40 percent; Bank of America is down 30 percent; and Morgan Stanley is trading 5 percent lower than the S&P 500. Exactly how does this represent a “source of strength”?

It should provide no comfort to any American that the Federal Reserve has, once again, embarked on a massive bailout of the big banks on Wall Street and has, once again, drawn a dark curtain around where the money is going. (See our ongoing series on the latest Fed bailout.)

We do know this much, however: the current financial crisis was not triggered by the COVID-19 pandemic. Yes, the pandemic has deepened the economic woes in the U.S. and around the world, but the first shoe to drop in the current financial crisis began on September 17, 2019, four months before the first reported death from COVID-19 anywhere in the world. September 17, 2019 is when overnight borrowing rates between financial institutions (repo loan rates) skyrocketed from 2 percent to 10 percent, forcing the Fed to begin pumping hundreds of billions of dollars weekly via repo loans into its primary dealers, which are the trading units of the mega Wall Street banks. This was the first time that the Fed had to intervene in any significant way in the repo loan market since the financial crisis in 2008.

This intervention by the Fed strongly suggested to Wall Street veterans that one or more trading houses on Wall Street was in trouble and financial institutions were backing away from making even collateralized loans. That’s precisely what happened in 2008.

At our last count, the Fed had pumped more than $9 trillion cumulatively into unnamed trading units of the mega Wall Street banks in just repo loans. (See The Fed Has Pumped $9 Trillion into Wall Street Over the Past Six Months, But Mnuchin Says “This Isn’t Like the Financial Crisis”.) That doesn’t include the 11 other emergency lending facilities the Fed has set up to take everything from junk bonds to junky collateralized loan obligations (CLOs) off the books of the big Wall Street banks.

It’s time for an independent commission, like the Financial Crisis Inquiry Commission that was convened during the last financial crisis, to be put into action. Nothing less than the safety, soundness and survival of the U.S. financial system is at stake.