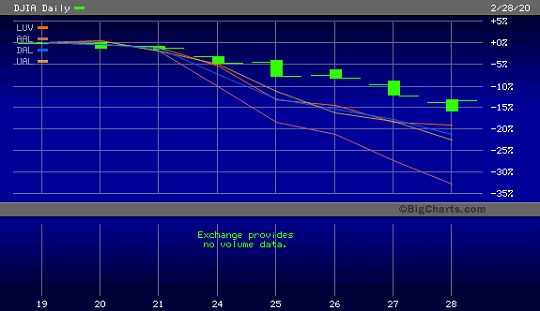 The Dow Jones Industrial Average closed with a whopping 1293 points in the green today, after losing 3600 points last week. (It looked like a classic short squeeze driving up the market today.) But despite the monster move up in stocks, two of the major airline stocks closed in the red today: American Airlines and United Airlines. Delta and Southwest closed in the green.

All four airlines, however, have been on a serious losing streak of late as fears over the coronavirus have spread. From their close on Wednesday, February 19, through last week, the four airlines have lost over $22 billion of their share value during those seven trading sessions.

The biggest loser in percentage terms was American Airlines. It lost 34 percent of its market value or $4 billion. United Airlines lost 24.8 percent or $4.88 billion while Delta gave up 21 percent or $7.9 billion.

The mildest rout among the four was Southwest Airlines, which lost 18.6 percent of its common share value or $5.5 billion.