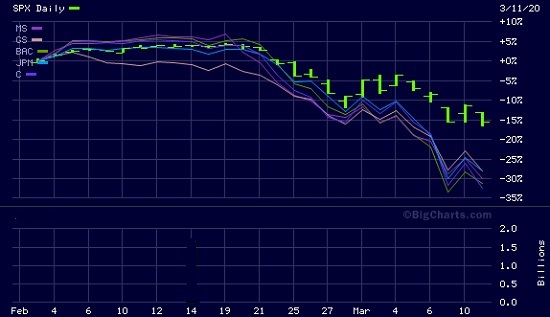 There has been a lot of delusional talk about the strong capital levels of the mega banks on Wall Street, not only from the Federal Reserve, but also from Wall Street analysts spreading fantasies about the banks on cable news programs. We took an afternoon off last Friday to hear what was being said about the banks on CNBC.

We were stunned to hear Mike Mayo, a long-tenured bank analyst on Wall Street, who currently works for Wells Fargo Securities, deliver a huckster-like assessment of the mega Wall Street banks. Mayo said this:

As for the Fed’s stress tests, which are simply another illusion, see our report: Three Federal Studies Show Fed’s Stress Tests of Big Banks Are Just a Placebo.

Then there is Mayo’s pitch that the banks have $2 trillion of additional cash. If they were actually rolling in liquidity, they wouldn’t be needing those hundreds of billions of dollars in revolving repo loans from the Fed each week, which began for the first time since the financial crisis on September 17 of last year and just got massively bigger today. (See our in-depth, ongoing series on the Fed’s repo loans to Wall Street here.)

As for adding $3 trillion in additional deposits, that has been eclipsed by the retention of dangerous derivatives at these banks. As of September 30, 2019, according to the regulator of national banks, the Office of the Comptroller of the Currency, those same five bank holding companies held $230 trillion in notional (face amount) of derivatives, which represents 85 percent of all derivatives held by the more than 5,000 banks and savings associations in the United States. This is the very definition of concentrated, uncontrollable risk.

Source: Office of the Comptroller of the Currency

Mayo glosses over this screaming concentration of risk like this in the CNBC interview:

Take a look at the chart at the top of this article showing how these banks have collapsed in price since the beginning of February and are trading like a herd. Then take a look at the disclosure screen below that CNBC put up during its interview with Mayo, showing that while he’s touting the virtues of these banks, he and his family, and his firm, own shares of JPMorgan Chase, Citigroup and Comerica.

The authors of this article do not own any positions (long or short) in any banks in America, nor have we ever held such positions.