“When plunder becomes a way of life for a group of men in a society, over the course of time they create for themselves a legal system that authorizes it and a moral code that glorifies it.” — Frédéric Bastiat, French Economist 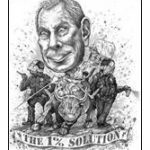 The real breaking news headline out of the Iowa Caucuses that had to be doled out over multiple days in measured bites of data is that Senator Bernie Sanders, who has promised to stop Wall Street’s plunder of the nation’s wealth, is leading the popular vote in the state.

Despite mainstream media and cable news’ efforts to spin the long-delayed Iowa vote data as a big win for 38-year old Pete Buttigieg, whose name most Americans can’t spell or pronounce, the real too hot to handle news is that folks in the Heartland of America have rejected the centrist-establishment-Wall Street agenda of former Vice President Joe Biden and have warmly embraced Senator Bernie Sanders’ promised political revolution. Biden currently ranks a distant fourth in the vote tallies with 71.44 percent of the vote reported.

And there is likely to be more sobering news for Wall Street next Tuesday. According to the latest Boston Globe/WBZ-TV/Suffolk University poll of likely Democratic primary voters, Sanders has a 24 percent share of the upcoming New Hampshire primary vote while Biden and Buttigieg hold a distant 15 percent share. The New Hampshire primary is next Tuesday, February 11. Sanders is a well-known name in New Hampshire, having easily beat Hillary Clinton there four years ago.

Following the Iowa Caucuses, Mike Bloomberg, the former Mayor of New York City who self-funded a campaign there to repeal term limits and gave himself a third term as Mayor, announced that he was doubling the ad spending for his Presidential campaign as well as his campaign staff, boosting it to approximately 2,000.

Bloomberg appears intent upon defeating any realignment of political control away from the one percent in America. He is self-funding his Presidential campaign and has already spent $188 million, more than twice the expenditures of Senator Bernie Sanders’ campaign according to the Center for Responsive Politics.

Bloomberg is a multi-billionaire whose wealth derives from leasing financial data terminals to Wall Street’s trading floors around the globe. Bloomberg’s police force bloodied, brutalized, pepper-sprayed and engaged in mass arrests of peaceful protesters during the Occupy Wall Street protests in 2012. (See the video below that was submitted in a court case as an indication of what kind of President Bloomberg would make.)

Mike Bloomberg is also the majority owner of Bloomberg News, which announced in November that it would not be allowing investigative reports on Mike Bloomberg or any other Democratic candidate. That policy, however, did not extend to its OpEd columnists. At 6:30 a.m. on Monday, the very day of the Iowa Caucuses, Bloomberg News published an opinion column by Michael R. Strain, the Director of Economic Policy Studies and a resident scholar at the Koch-funded, right wing, climate change skeptic think tank, the American Enterprise Institute (AEI). The bold headline screamed: “Trump Hurts the Economy. Sanders Would Be Worse.” The article mapped out a preposterous doomsday scenario of what would happen economically to the U.S. if Sanders were elected, ignoring the legitimate threat of what would happen if Wall Street is not reined in and needs another $29 trillion bailout.

Allowing a paid employee of an outfit like AEI to trash Sanders on his media platform raises serious questions about exactly why Mike Bloomberg is in this race and who he’s aligned with. (Bloomberg served his first two terms as Mayor as a Republican.)

According to the Conservative Transparency database, one of the largest donors to American Enterprise Institute over the years has been Donors Capital Fund, which has provided $26 million to the think tank. In 2010 we broke the news that the same stealthy nonprofit, Donors Capital Fund, had the fingerprints of billionaire Charles Koch all over it. It had forked over $17,778,600 to fund a widely distributed race-baiting film in the weeks before the 2008 Presidential election – an election in which the first black man, Barack Obama, was the Democratic candidate for President.

Bloomberg is running as an advocate of controlling climate change. AEI has an opposite agenda. According to Greenpeace: “American Enterprise Institute (AEI) has a long track record of distorting the science and solutions of climate change. Its arguments tend to de-emphasize the environmental and economic risks of climate change, exaggerate the costs of addressing the problem and question the value of putting a policy in place at all…AEI’s Ken Green infamously offered $10,000 (along with travel and lodging expenses) to any scientist willing to undermine a 2007 report by the Intergovernmental Panel on Climate Change (IPCC).”

This is the first time in modern history that the U.S. has a Presidential candidate with unlimited billions to spend on his campaign and owns a media outlet that appears able and willing to trash his opponents. That’s a new threat to free and fair elections that needs to be carefully monitored.