At Press Conference, Fed Chair Powell Refuses to Answer Whether Wall Street Banks Are Too Big to Manage 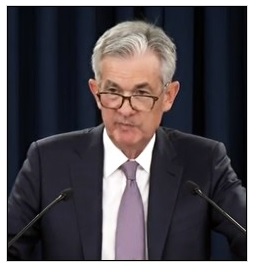 Following a lack of liquidity on Wall Street, which necessitated the Federal Reserve having to provide $53 billion on Tuesday and another $75 billion on Wednesday to normalize overnight lending in the repo market, the Chairman of the Fed, Jerome (Jay) Powell held his press conference at 2:30 p.m. yesterday. The press gathering followed both a one-quarter point cut in the Fed Funds rate by the Fed yesterday as well as the first intervention by the Fed in the overnight lending market since the financial crash. (The Fed had to intervene again this morning, making another $75 billion in repo loans available.)

The week’s unsettling events should have provided the basis for reporters to fire questions at the Fed Chair along the following lines: (1) Did the overnight repo lending rate jump to an historical high of 10 percent on Tuesday because some of the largest Wall Street banks backed away from lending? (2) With six mega banks on Wall Street holding 90 percent of the risky $272 trillion U.S. derivatives market and also a disproportionate share of Federally-insured deposits, could the U.S. see another 2008 type of crash on Wall Street? (3) Are these six banks too interconnected with each other, meaning that if one of them gets into trouble as Citigroup did in 2008, could it spill over to every other mega Wall Street bank?

While every major business news outlet was represented at the press conference, not one of the above questions was asked. One reporter, however, came close.

Hannah Lang, a reporter with American Banker, asked Powell about reports out yesterday that Bank of America was being investigated by the Consumer Financial Protection Bureau for opening unauthorized accounts. She asked if the Fed was also investigating this and said that given the pending order against Wells Fargo for the same kind of behavior, if Powell was concerned that these banks are too big to manage.

Powell said he saw the news about Bank of America but he had no further information to share. He said that the Wells Fargo situation was quite harmful to the customers and damaged the firm’s reputation. As for whether these mega banks are too big to manage, Powell simply ignored that portion of the question entirely.

If Lang had wanted to add critical ammunition to her question, she might have posed it this way: “Chairman Powell, for the first time in U.S. history, two of the largest banks on Wall Street are admitted felons. Citigroup admitted to one criminal felony count in 2015 for its role in rigging foreign currency markets. JPMorgan Chase, the largest bank in the U.S. and on Wall Street, has admitted to three criminal felony counts in the last five years: two counts for its role in Bernie Madoff’s Ponzi scheme and one count for its involvement in rigging foreign currency markets. On Monday, JPMorgan Chase was back in the news again with the Department of Justice charging three of its gold and silver traders with racketeering – a criminal charge typically used against organized crime. And, today, Bank of America is under investigation for opening the same kind of unauthorized customer accounts that happened at Wells Fargo. Mr. Chairman, are these banks too big to manage and too corrupt to be allowed to exist?”

If one considers the trillions of dollars in derivatives that these banks are on the hook for, they have once again become highly leveraged and dangerous. Chairman Powell responded to a question from Nancy Marshall-Genzer of Marketplace about debt in the system like this:

“The level of debt relative to GDP in the business sector is at a high level. However, so is the size of the business sector. So, actually, the business sector itself is not materially higher leveraged than it was. None the less, there are a lot of highly levered companies. And that’s the kind of thing that happens during a long cycle when there aren’t downturns. We’re now into our eleventh year, you do get that kind of phenomenon in a long cycle. That’s something we’re monitoring and I think our view still is that’s a real issue but what it really represents is a potential amplifier of a macro-economic downturn. It does not have the makings of anything that would undermine the workings of the financial system, for example, or could itself create a shock that would turn the economy down…”

That answer effectively pretends that 2008 never happened. Lending came to a frightening halt in 2008 because no one could predict with any clarity which Wall Street bank would fail next as a result of its own high leverage or its exposure to a highly levered borrower like Lehman Brothers, for example.

Chairman Powell, who spent most of the press conference answering questions from a written script in a folder on the podium, did let this one nugget slip out about highly levered businesses. Powell said “The Financial Stability Board is actually conducting a project right now to identify where these loans are held all around the world. So, it’s a subject of a lot of study and work and we’re trying to keep on top of it.”

The best way to keep on top of it is to look at what’s on and off the balance sheets at the mega Wall Street banks.