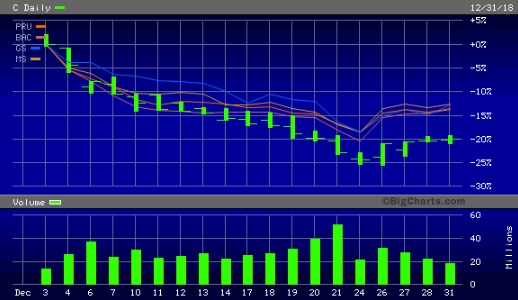 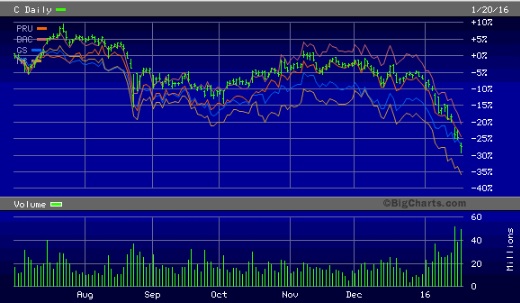 According to the Federal Deposit Insurance Corporation (FDIC), as of September 30, 2018 there was a total of $13.6 trillion in deposits at all 5,397 Federally insured banking and savings institutions in the U.S. but just nine mega banks represented 40 percent of all domestic deposits. Those nine are the insured banking units of the holding company for JPMorgan Chase with $1.3 trillion in domestic deposits; Bank of America at $1.36 trillion; Wells Fargo with $1.27 trillion; Citigroup at $504 billion; U.S. Bancorp $314 billion; Morgan Stanley $181 billion; BB&T $161 billion; Goldman Sachs $130 billion; and State Street $108 billion.

Unfortunately, the FDIC’s Deposit Insurance Fund had only $100.2 billion as of September 30, 2018 to cover losses should any of those trillion-dollar-banks fail – which means they can’t fail and have thus become known as too-big-to-fail, even as they continue to take massive positions in opaque derivatives.

Even more unfortunate for the American people and the U.S. financial system, six of those mega banks are highly interconnected: JPMorgan Chase, Citigroup, Bank of America, Wells Fargo, Goldman Sachs and Morgan Stanley. We know how interconnected these banks are as a result of studies issued by the Office of Financial Research (OFR), a Federal agency created under the Dodd-Frank financial reform legislation of 2010 to prevent a replay of a handful of Wall Street banks taking down the U.S. financial system again as they did in 2008. We also know just how interconnected these banks are because of how their stocks all trade as a herd when there is fear in the stock market. (See charts above.)

In 2015 OFR released a study showing dangerous levels of systemic and interconnected risk among these mega banks. Authored by Meraj Allahrakha, Paul Glasserman, and H. Peyton Young, the report found the following:

JPMorgan Chase and Citigroup ranked highest in the OFR study in terms of systemic fallout. JPMorgan Chase paid $920 million in fines for its 2012 London Whale saga where it allowed an unlicensed woman, Ina Drew, to supervise traders in London who lost at least $6.2 billion gambling in exotic derivatives using deposits at the U.S. Federally-insured bank. Citigroup received the largest taxpayer-bailout in U.S. history during the financial crisis. Its haul included an infusion of $45 billion in capital from the U.S. Treasury; a government guarantee of over $300 billion on its dubious assets; a guarantee of $5.75 billion on its senior unsecured debt and $26 billion on its commercial paper and interbank deposits by the FDIC; and a secret revolving loan facility from the Federal Reserve that sluiced a cumulative $2.5 trillion in below-market-rate loans from 2007 to the middle of 2010 to Citigroup.

In October 2011, Jane D’Arista wrote the following in a paper for the University of Massachusetts at Amherst regarding the Wall Street financial collapse in 2008:

“Interconnectedness is one of the critical clusters of related causes of the crisis. It resulted from the extraordinary growth in indebtedness within the financial sector that facilitated higher leverage ratios and rising levels of speculative trading for institutions’ own accounts. As the amount of short-term borrowing and lending among financial institutions expanded, markets for repurchase agreements and commercial paper became primary funding sources, forging  a chain that linked the fortunes of many institutions and various financial sectors to the performance of a few of the largest and exacerbated systemic vulnerability. Increased profits and compensation masked the growing vulnerabilities in the system but the crisis outcome was inevitable given:

D’Arista noted that “The major achievement of the Dodd-Frank Act is that, if properly implemented, the provisions in sections 609, 610 and 611 can reduce the interdependence of US institutions….”

Sadly for the American people and the health of the U.S. financial system, the Dodd-Frank legislation was a bust because it left formalization of the rules up to Wall Street’s increasingly crony regulators. Wall Street remains systemically interconnected today and there are new threats on the horizon: the German mega bank, Deutsche Bank, which has traded down from a share price of $120 in 2007 to a closing price yesterday of $6.87, is interconnected to the Wall Street mega banks through derivatives. Prudential Insurance, which is also a counterparty to Wall Street’s derivatives, has been removed from enhanced supervision by the Trump administration. Notice on the charts above that Prudential Financial trades as a clone to the Wall Street banks.

The only avenue for avoiding another epic financial and economic crash in the U.S. is to restore the Glass-Steagall Act, which means separating the commercial banks holding taxpayer-backstopped deposits from the Wall Street casino’s investment banks and brokerage firms that continue to put their own interests ahead of the country’s.