The Wolves Have Turned on Each Other on Wall Street 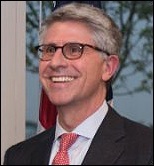 Some decades back, the late MIT economist Lester Thurow wrote this:

“Essentially, the economic problem is like that of the wolf and the caribou. If the wolves eat all the caribou, the wolves also vanish.”

What Thurow did not take into consideration is that if the wolf pack is large enough, it can survive for quite a while by turning on other wolf packs.

That’s what is happening right now on Wall Street. The wolves are at war with each other. The New York Stock Exchange and Nasdaq have filed a lawsuit against the Securities and Exchange Commission and are slinging mud in court at a former, long-tenured JPMorgan Chase executive, Brett Redfearn, who now polices them at the SEC. We’ll get to all that in a moment, but first some background.

It all started when the stock exchanges decided they no longer wanted to function like public utilities operating in the public interest to create a fair and efficient market place for stock trading in America and would instead become whore houses for high frequency traders at the Wall Street mega banks and hedge funds.

The New York Stock Exchange and Nasdaq allow these high frequency traders to co-locate their computers next to the main computers of the exchanges in their data centers to gain a speed advantage over other customers at a monthly cost that is so exorbitantly expensive that it prices out the average trader and small trading firms. On top of that, the exchanges are adding huge fees for access to their fastest data feeds for stock trade information while giving the public a slower, dumbed-down data feed. These trading advantages allow high frequency traders to manipulate stock prices and front-run orders from the public.

As a result of the Securities Exchange Act of 1934 (which followed the most corrupt era on Wall Street until the present one) the SEC was created to rein in Wall Street’s fleecing of the American public and the excesses that led to the 1929 crash. Under the legislation, the SEC is specifically charged with policing the stock exchanges. Section 6 of the Act mandates that the SEC must ensure that exchanges maintain “the equitable allocation of reasonable…fees, and other charges among its members and issuers and other persons using its facilities.” The same section requires “just and equitable principles of trade,” the removal of impediments to a “free and open market” and specifically states that an exchange shall not “permit unfair discrimination between customers.”

The public first leaned about this budding war in 2014 with the publication of the Michael Lewis bestseller, Flash Boys. Lewis wrote that “both Nasdaq and the New York Stock Exchange announced that they had widened the pipe that carried information between the HFT [high frequency trading] computers and each exchange’s matching engine. The price for the new pipe was $40,000 a month, up from the $25,000 a month the HFT firms had been paying for the old, smaller pipe.” By late 2011, according to Lewis, “more than two-thirds of Nasdaq’s revenues derived, one way or another, from high-frequency trading firms.”

Today, according to industry sources, the fastest connections and data feed can cost over $150,000 a month or $1.8 million a year. Imagine Aunt Sally’s Stock Trading Club in Duluth attempting to compete on a level playing field with that kind of toll gate.

Lewis didn’t mince any words when he went on the CBS program 60 Minutes in 2014 to announce the publication of his book. The interview opened like this:

Steve Kroft: By whom?

Michael Lewis: By a combination of these stock exchanges, the big Wall Street banks and high-frequency traders.

Steve Kroft: Who are the victims?

Michael Lewis: Everybody who has an investment in the stock market.

In the Afterword that appeared in the paperback version of the book, Lewis explains what this rigged market is costing the public in real dollar terms, using one large public pension as an example. Lewis writes:

“In 2014, this giant money manager bought and sold roughly $80 billion in U.S. stocks. The teachers and firefighters and other middle-class investors whose pensions they managed were collectively paying a tax of roughly $240 million a year for the benefit of interacting with high-frequency traders in unfair markets.”

Showing just whom the SEC really works for, instead of outlawing the co-location of hedge funds’ and Wall Street banks’ computers next to those of the stock exchanges and outlawing a faster data feed than that which the public has access to, last October the SEC simply sided with the Wall Street banks’ trade association, SIFMA, and rolled back a few very specific fee increases made by the New York Stock Exchange and Nasdaq. The fee limitations were “prospective,” meaning that they couldn’t be charged going forward but what had already been charged would stick.

The October 16, 2018 order read: “This case concerns two particular fee rules, and SIFMA’s challenges to the exchanges’ enforcement of those provisions. Thus, striking these fees as an improper limitation of access, as we do here, does not set aside other fees or limitations on access not directly at issue in this proceeding.”

The New York Stock Exchange and Nasdaq appealed the SEC’s ruling to the U.S. Court of Appeals for the District of Columbia Circuit. On Monday, the New York Stock Exchange’s Arca unit filed a new brief slinging ethics violations at the SEC’s Redfearn, whose former long-term employer, JPMorgan Chase, benefits from the reductions in stock exchange fees. The brief alleges the following:

“Although Arca and Nasdaq raised concerns about Redfearn’s possible involvement with the Commission Decision numerous times, the SEC never acknowledged those concerns. Here, the SEC tried to brush the issue aside in a tightly-crafted footnote stating that Redfearn ‘is subject to ethics rules’ but not that they were complied with.

“After the SEC issued the Commission Decision, NYSE made a FOIA request regarding Redfearn’s involvement. When the SEC failed to respond, NYSE sued, which finally forced the SEC to (partially) respond between the filing of Arca’s opening brief and this reply brief. The SEC completed its initial response on June 21, 2019, although it asserts deliberative process privilege over part or all of nearly every responsive document, including supposedly final decisions. NYSE will promptly challenge that in the District Court (and this Court may wish to retain jurisdiction because those proceedings will likely show further details regarding how Redfearn’s involvement influenced this proceeding). The SEC’s incomplete FOIA response shows that Redfearn was substantially involved in drafting the Commission Decision: He began asking about this proceeding on November 6, 2017, the day he began working at the SEC. Thereafter he sent or received at least 32 emails containing drafts of the Commission Decision and/or his comments on USCA drafts and participated in at least six meetings to discuss drafts. And on September 20, 2018, Redfearn held a ‘SIFMA Decision Briefing’ for Elad Roisman, then the newest SEC Commissioner, in Redfearn’s office.

“This begs the question (which SEC OIG also asked) whether ethical advice was sought regarding whether it was proper for Redfearn to participate in drafting the Commission Decision. Drafts of an OEC memorandum regarding Redfearn’s participation in market data-related matters were circulated in December 2017 and apparently finalized on December 14, 2017, but the SEC did not disclose that memorandum until June 21, 2019, and it has withheld the bulk of the final memorandum under the deliberative process privilege. Although that is itself wrong, see N.L.R.B. v. Sears, 421 U.S. 132, 151-52 (1975), another troubling issue is that the OEC email forwarding the ‘final’ memorandum reveals that Redfearn edited his own ethics memorandum and, of course, all those edits have been withheld. Although it is impossible to fully evaluate the OEC memorandum as it has been produced, even the highly-redacted document raises red flags….”

You can read the full scathing brief against Redfearn here.

It certainly would appear that Redfearn had insurmountable conflicts of interest in this matter and should have recused himself. But it’s more important to remember that this case isn’t about the public interest; it’s about a war between the wolves of Wall Street.