A Critical House Hearing Gets a News Blackout this Week 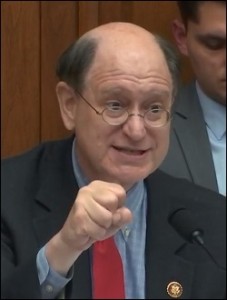 On Wednesday, June 19, the House Financial Services Subcommittee on Investor Protection, Entrepreneurship, and Capital Markets held a hearing on “Putting Investors First: Examining Proposals to Strengthen Enforcement Against Securities Law Violators.” Eight pieces of draft legislation were being vetted to address critical gaps in protecting U.S. investors from financial fraud and make sure wrongdoers paid for their crimes.

Despite the critical nature of the legislation to be discussed at this hearing, it received a news blackout from corporate business media, with the exception of a report that appeared in advance of the hearing by Francine McKenna of the Dow Jones news outlet, MarketWatch.

We knew early on that there was going to be a big push back from Wall Street on this proposed legislation when we saw the name of one of the four witnesses scheduled to testify: Andrew Vollmer, a Professor of Law at the University of Virginia School of Law. Vollmer is the former Deputy General Counsel of the Securities and Exchange Commission (SEC) who waltzed in and out of the revolving door at the SEC from the big corporate law firm, Wilmer Cutler Pickering Hale and Dorr. 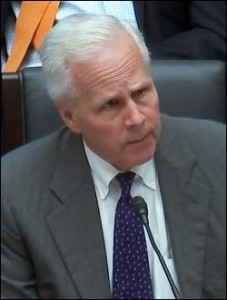 Vollmer was serving as acting General Counsel of the SEC in 2009 when the House Financial Services Committee hauled the leadership of the SEC before a hearing to investigate why it had failed to act on years of written warnings from the financial expert, Harry Markopolos, that Bernie Madoff was running a massive Ponzi scheme. Vollmer refused to answer critical questions from lawmakers on a claim of executive privilege. (See the outrage this invoked from Congressman Gary Ackerman, who called Vollmer the real enemy, in the video below.) Madoff had run his Ponzi scheme for decades and the SEC had failed to act on what turned out to be the largest Ponzi scheme in U.S. history, despite having investigated Madoff on two prior occasions. It closed those matters with no charges brought. Madoff admitted his fraud to his sons in 2008 and they turned their father in.

Vollmer’s role on Wednesday was that of a naysayer as to the need for this critical legislation, stating in his written testimony: “To a large extent, the enforcement bills would make securities activities in the United States more costly and would burden the capital formation process without sufficient offsetting benefits.”

This is the same ole meritless, dodgy defense that corporate lobbyists use every day of the week to keep vital bills from moving forward in Congress. This inaction has left millions of Americans vulnerable to predatory behavior on Wall Street and Ponzi schemes like that of Madoff and Allen Stanford.

Other witnesses testifying at the hearing were Jordan A. Thomas, a law partner at  Labaton Sucharow who chairs its Whistleblower Representation Practice and  Urska Velikonja, a Professor of Law at Georgetown University Law Center. Both Thomas and Velikonja spoke enthusiastically for the proposed legislation. The fourth witness was Stephen Crimmins, a law partner at Murphy & McGonigle who was previously Deputy Chief Litigation Counsel at the SEC’s Enforcement Division and now represents defendants in cases brought by the SEC. Crimmins’ testimony focused on weaknesses in the proposed legislation that defense attorneys would likely pick apart in trial court. 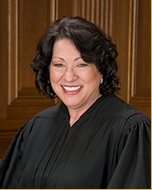 One of the critical pieces of legislation being proposed by Congressman Ben McAdams of Utah would amend the Securities Exchange Act of 1934 to allow the SEC “to seek and Federal courts to grant restitution to investors and disgorgement of unjust enrichment.” Being able to claw back the ill-gotten gains of Wall Street fraudsters and Ponzi schemers like Madoff and Stanford was thrown into turmoil in 2017 when the typically level-headed Supreme Court Justice, Sonia Sotomayor, wrote the abysmally bad and unanimous opinion for the court in Kokesh v SEC.

The SEC had charged Kokesh with misappropriating $34.9 million from business development companies. The SEC won a jury verdict in its favor and the court ordered Kokesh to pay a $2.35 million civil monetary penalty, $34.9 million in disgorgement, and $18.1 million in prejudgment interest.

The 10th Circuit’s opinion was far more reasoned, writing: “[W]e fail to see how an order to obey the law is a penalty. Its purpose is not to penalize Defendant; after all, everyone has a duty to obey the law. It is to protect the public by giving Defendant an added incentive to conduct himself in accordance with the securities laws…”

What Sotomayor and her fellow Justices had done was to effectively allow financial fraudsters to loot the public for decades and then keep all the yachts and mansions they had acquired during all periods but the last five years.

Congressman Brad Sherman of California proposed legislation to be titled the “Holding Foreign Companies Accountable Act.” That legislation would address the fact that some foreign countries, specifically China, prevent or impair the Public Company Accounting Oversight Board (PCAOB) in its ability to inspect audit firms based outside the U.S. Currently, there are 224 companies trading on U.S. stock exchanges (with $1.8 trillion in market value) where the PCAOB is facing obstacles in inspecting the principal auditor’s work.

Sherman’s proposed legislation would require the SEC to prohibit companies from trading on an exchange or alternative trading system in the U.S. if the PCAOB is unable to inspect the foreign public accounting firm on the prescribed timetable. The draft legislation would also require a foreign company applying for listing in the U.S. to state whether it is state-owned or government-controlled. (For background on this critical problem, read our report from 2014: U.S. and China Lock Horns Over Audits; $1.4 Trillion in U.S. Stock Value at Risk and our 2016 report: How Did the U.S. Stock Market Become So Intertwined With China?) 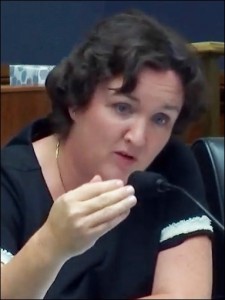 The feisty young Congresswoman from California, Katie Porter, is proposing two new pieces of legislation. One, the “Stronger Enforcement of Civil Penalties Act of 2019” would increase the amount of money the SEC could impose for civil monetary penalties from a per-violation cap for the most serious violations from $181,071 to $1 million for individuals, and from $905,353 to $10 million per violation for entities.  It would also triple the applicable penalty cap for repeat offenders who have been found to be criminally or civilly liable for securities fraud within the preceding five years.

Another piece of proposed legislation from Porter is the “Corporate Management Accountability Act of 2019.” This proposed bill would mandate that publicly-traded companies announce their policies on whether senior executives or shareholders are to bear the cost of paying the company’s fines and penalties that are imposed by regulators for fraud and other forms of wrongdoing.

You can read the details of the full list of proposed legislation in this Committee memorandum. The full text of the proposed bills are available here.

Andrew Vollmer, then Acting General Counsel of the SEC, Testifying Before House Financial Services Committee in the Madoff Ponzi Scheme Matter in 2009