Trump, Kushner and the Times Bombshell: What You Should Know About “Private” Banking in New York City 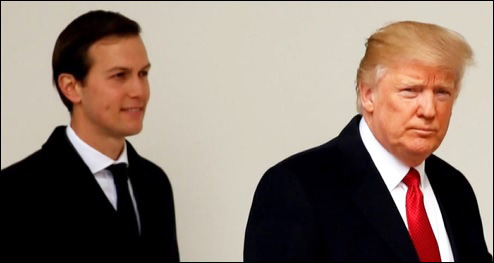 Yesterday, every U.S. television network carried the New York Times bombshell that Deutsche Bank employees had flagged suspicious activity in the bank accounts of President Donald Trump and his son-in-law, Jared Kushner, involving foreign money flows, but their superiors at Deutsche Bank did not allow the reports to be filed with the Financial Crimes Enforcement Network (FinCEN), a unit of the U.S. Treasury that is mandated under law to receive and investigate such reports. From there the news went viral around the globe, landing on cable news, Reuters and in European newspapers. (Shortly after trading opened this morning on the New York Stock Exchange, Deutsche Bank’s stock traded at an all-time low of $7.39. This was a $120 stock in 2007.)

There is no disputing the fact that this is a critical development, for the following key reasons that we will address one by one.

First, Trump is Tweeting away this morning, bashing the New York Times’ report as “Fake News” and adding that “Fake Media” “uses unnamed sources (because their sources don’t even exist).” That retort has worked well for Trump in the past but it’s not going to fly this time around. The Times carries a photo of the Deutsche Bank whistleblower, Tammy McFadden, one of the five sources for their story. She is described as “a longtime anti-money laundering specialist in Deutsche Bank’s Jacksonville office,” who “found that money had moved from Kushner Companies to Russian individuals,” and “concluded that the transactions should be reported to the government — in part because federal regulators had ordered Deutsche Bank, which had been caught laundering billions of dollars for Russians, to toughen its scrutiny of potentially illegal transactions.”

McFadden then drafted a Suspicious Activity Report (SAR). McFadden and two other Deutsche Bank managers told the Times that the normal procedure was for the SAR to be “reviewed next by a team of anti-money laundering experts” who were independent of the business unit where the transaction originated. That didn’t happen. The very unit that had handled the transaction, the Private Bank, blocked the report from moving on to FinCEN, according to McFadden and her former colleagues. McFadden told the Times she was fired from Deutsche Bank last year after raising concerns about the bank’s money laundering practices.

This raises point number two. Deutsche Bank could be in very serious trouble over this issue. JPMorgan Chase was charged, and admitted to, two criminal felony counts on January 7, 2014 for failing to uphold the Bank Secrecy Act (BSA) and file a SAR with FinCEN. Those charges resulted from JPMorgan Chase’s failure to report highly suspicious activity in the business bank accounts it held for Bernie Madoff, in what turned out to be the largest Ponzi scheme in history. The Private Bank of JPMorgan Chase was also involved in this matter as billions of unexplained dollars were flowing back and forth between Madoff and a highly valued real estate client of JPMorgan’s Private Bank, Norman F. Levy.

After reading the documents released by the Justice Department on the day it announced the two felony counts against JPMorgan Chase, the Los Angeles Times asked in a photo caption of a smirking Madoff outside of Federal Court: “Bernie Madoff: Was he part of the JPMorgan ring, or was JPMorgan part of his ring?”

The same thing could be potentially asked here: Donald Trump: Is he part of the Deutsche Bank ring, or was Deutsche Bank part of his ring?”

Deutsche Bank settled with U.S. and U.K. authorities over a $10 billion Russian money laundering scheme in 2017, paying a combined fine of $630 million.  Deutsche Bank’s offices in Frankfurt, Germany were raided in November of last year by 170 law enforcement officials. The probe involved potential money laundering. The draft report released by Democrats on the House Permanent Select Committee on Intelligence on March 13 of last year contained this paragraph:

“Donald Trump’s finances historically have been opaque, but there have long been credible allegations as to the use of Trump properties to launder money by Russian oligarchs, criminals, and regime cronies. There also remain critical unanswered questions about the source of President Trump’s personal and corporate financing. For example, Deutsche Bank, which was fined $630 million in 2017 over its involvement in a $10 billion Russian money-laundering scheme, consistently has been the source of financing for President Trump, his businesses, and his family. We have only begun to explore the relationship between President Trump and Deutsche Bank, and between the bank and Russia.”

Over the years, Deutsche Bank has loaned Trump “a total of well over $2 billion,” according to an earlier report in the New York Times. A significant part of that money was loaned when other major banks would not loan to Trump due to his defaults and business bankruptcies.

“After Mr. Trump became president, transactions involving him and his companies were reviewed by an anti-financial crime team at the bank called the Special Investigations Unit. That team, based in Jacksonville, produced multiple suspicious activity reports involving different entities that Mr. Trump owned or controlled, according to three former Deutsche Bank employees who saw the reports in an internal computer system.

“Some of those reports involved Mr. Trump’s limited liability companies. At least one was related to transactions involving the Donald J. Trump Foundation, two employees said.

“Deutsche Bank ultimately chose not to file those suspicious activity reports with the Treasury Department, either, according to three former employees. They said it was unusual for the bank to reject a series of reports involving the same high-profile client.”

And now for point three: money laundering and Private Banking have a long, sordid history in the United States, thanks to the failure to prosecute and jail on the part of the U.S. Department of Justice.

Conducting 10 investigations on 18,000 suspicious activity alerts sounds a lot like not wanting to rock the boat or catch the crooks – especially given the history of Citibank, the Federally-insured commercial bank that is part of Citigroup. As we previously reported:

“– Raul Salinas, brother to the former President of Mexico; now in prison in Mexico for murder and under investigation in Mexico for illicit enrichment; [Salinas had his murder conviction overturned on appeal and was released from prison in 2005.]

Robert L. Roach, Counsel to the Senate investigation, outlined during the hearing the services that Citibank had provided to Raul Salinas, brother to then President of Mexico, Carlos Salinas, as follows:

“To accommodate Mr. Salinas’ desire to conceal the fact that he was moving money out of Mexico, Ms. [Amy] Elliott [a Relationship Manager at Citibank] introduced Mr. Salinas’ then-fiancee Paulina Castanon as Patricia Rios to a service officer at the Mexico City branch of Citibank. Operating under that alias, Ms. Castanon would deliver cashiers checks to the branch where they would be converted into dollars and wired into a concentration account in New York. The concentration account is a business account established by Citibank to hold funds from various destinations prior to depositing them into the proper accounts. Transferring funds through this account enables a client’s name and account number to be removed from the transaction, thereby clouding the audit trail. From there, the money would be transferred to the Trocca, Ltd. accounts in London and Switzerland…

Roach further expounded on how the Relationship Manager’s need to “please the client” trumped their responsibilities under the law, stating that “After Mr. Salinas was arrested, Hubertus Rukavina, the head of Citibank Private Bank at the time, suggested that the Salinas accounts in London be transferred back to Switzerland because they would be afforded more secrecy there.”

Amy Elliott, according to Roach, even advised Mrs. Salinas “that it might be wise to move the Trocca, Ltd. account out of Citibank because it might be more difficult for Mexican authorities to obtain account information from a non-U.S. bank.”

At one point during the hearing, Senator Levin questioned Amy Elliott on the transcript of a phone conversation she had with a colleague:

Amy Elliott: “Bill Rhodes…I am sitting four or five down from the chairman, and Bill Rhodes was and is the vice chairman of the bank. To me, that’s pretty top.”

It should be crystal clear that the U.S. Department of Justice can’t be in charge of this new investigation if America expects to ever extricate itself from this unprecedented era of corruption.