Trade Wasn’t the Only Problem in the Market Yesterday: Citigroup Tanked 5.18% 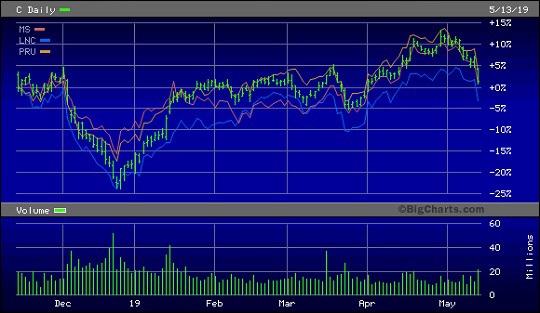 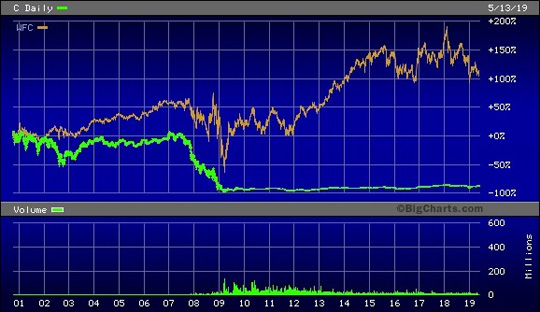 Allow us to set the stage for what happened in yesterday’s market rout which saw the Dow Jones Industrial Average shed 617 points. The easy answer is that the market is unnerved by the ongoing trade war between the Trump administration and China. And, clearly, that’s part of the problem. But the market is also keenly aware that there are a handful of mega banks on Wall Street that have monster exposure to derivatives and are systemically interconnected to the counterparties on the other side of those trades. The problem is that nobody, including the regulators, has clarity on which counterparty is in over their head and may have failed to reserve adequate capital if it has to pay out on too many losing derivative trades.

That’s what happened in 2008 when a unit of the giant insurer, AIG, had quietly become the derivatives counterparty on credit default derivatives to many of the major Wall Street and global banks. AIG had also tangled itself up in securities lending to Wall Street and that blew up as well. AIG collapsed and received a government bailout of $185 billion in order to pay off the debts it owed to the mega banks.

One would have thought that Congress would have surely written its Dodd-Frank financial reform legislation of 2010 to stop Federally insured banks from having exposure to tens of trillions of dollars of opaque derivatives. One would have thought that Congress would have prevented U.S. life insurers, which are issuing critical death benefit policies and annuities to provide retirement income to seniors, from playing with derivatives in the Wall Street casino. Unfortunately, Congress did not have the guts to stand up to Wall Street and do either.

As of December 31, 2018, according to the Office of the Comptroller of the Currency (OCC), the 25 top bank holding companies in the U.S. have $232.7 trillion notional (face amount) in derivatives. Just five bank holding companies account for 86 percent of the total: JPMorgan Chase, Citigroup, Goldman Sachs Group, Morgan Stanley and Bank of America.

Each year the Office of Financial Research (OFR), part of the U.S. Treasury Department, publishes a Financial Stability Report to gauge risks building up in the U.S. financial system. The 2016 Financial Stability Report indicated that at the end of 2015, U.S. life insurers had $2 trillion notional in derivatives. But it warned that this could be the tip of the iceberg since there could be a lot more derivatives sitting in some of their affiliates that do not have to make statutory filings of their derivative exposure. The report also paved a path directly to Wall Street banks, writing:

The 2018 Annual Report from OFR raised another alarm regarding U.S life insurers. It noted that: “The 2017 tax law affects the regulatory capital of U.S. life insurers, as it does for banks. Insurers’ risk-based capital appears to remain above the regulatory minimum, but not by as much as in the past. Lower capital buffers make insurers potentially more vulnerable to insolvency risk in times of stress.”

With all of the above in mind, we took a look at how the mega Wall Street banks traded yesterday as well as those seven life insurers with derivative exposure that are listed in the 2017 Financial Stability Report. A disturbing pattern emerged which we have captured in the top chart above.

The fact that Citigroup, Prudential Financial and Lincoln National all lost 5 percent or more while their peers performed significantly better led us to chart how their stocks have performed over the past six months. (Since Morgan Stanley was also down close to 5 percent, we included it in the chart.) The result is that these stock patterns suggest a disturbing interconnectedness and the potential for contagion in a major market downturn.

To illustrate just how much of an outlier Citigroup is, the second chart above compares its stock price performance since 2001 to that of Wells Fargo.

While the Democrats control the House of Representatives and their Committees, there is no better time than the present to bring these hidden market dangers out into the sunshine.