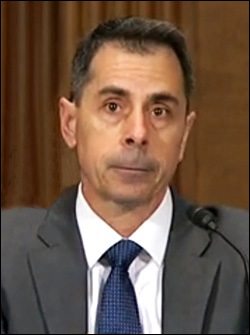 Kenneth Blanco, Director of FinCEN, Testifying at a Senate Banking Committee Hearing on May 21, 2019

Reading the New York Times is apparently now seen as being disloyal to the President of the United States if you’re a Federal employee. Just holding the newspaper in one’s hands might be enough to become an early pensioner in the Trump administration. Yesterday it became crystal clear at a Senate Banking hearing just how terrified people are in the Federal government of getting on the wrong side of the President and ending up being publicly bashed on his Twitter page.

The Senate Banking hearing on Tuesday was called to get answers from the witness panel on how to combat money laundering in the United States by shell companies that keep their real owners a secret. But it quickly became a hearing also about the bombshell report from the New York Times on Sunday. That article, by David Enrich, describes how a Deutsche Bank whistleblower, Tammy McFadden, and four of her colleagues had their efforts blocked by the bank when they tried to file suspicious activity reports on bank accounts affiliated with Jared Kushner and Donald Trump. Those reports should have gone to the Federal agency that oversees potential money laundering activity, the Financial Crimes Enforcement Network or FinCEN, but they were quashed by a unit of the bank that manages money for the super wealthy.

The Director of FinCEN, Kenneth Blanco, was on the witness panel for the hearing. When Blanco was asked by Senator Bob Menendez if he had read the article in the New York Times, Blanco said that he had not, adding that he had simply been “briefed” on it. This statement appeared to be little more than an effort to appease the anger of Trump toward the New York Times (the President regularly calls it “Fake News”) since it would be negligence on the part of the Director of FinCEN not to read a whistleblower’s account of what went on inside Deutsche Bank – especially given Deutsche Bank’s 2017 fine of $630 million for laundering $10 billion out of Russia.

Blanco also refused to answer any questions as to whether he was or was not opening an investigation as a result of the report in the Times. That elicited a stern statement to Blanco from Senator Chris Van Hollen, who told him that “If FinCen has not already been in touch with that whistleblower, in my view, that’s gross negligence.” 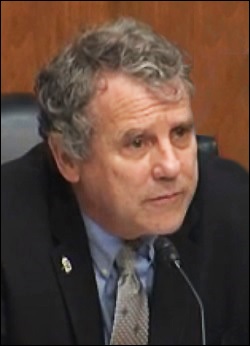 Senator Sherrod Brown, the ranking member of the Committee, also addressed the issue in his opening statement, commenting as follows:

“This weekend we got a reminder of how important these issues are, courtesy of reporting by The New York Times that money laundering specialists working for Deutsche Bank had repeatedly recommended the filing of suspicious activity reports on transactions by President Trump’s and Jared Kushner’s organizations, including transactions with actors overseas.

“But those experts were over-ruled by senior Private Wealth Division officials. Even state regulators or House Financial Services Committee subpoenas to Deutsche Bank can’t get at suspicious activity reports that are never filed – that are effectively quashed within the bank and never conveyed to the experts at FinCEN in the Treasury Department and the financial watchdogs that are supposed to assess these transactions.

“And compliance officials described a pattern at Deutsche of efforts like that to reject SAR filings for lucrative clients. We need to get to the bottom of what happened here. Everyone has to follow anti-money laundering laws and rules – you don’t get an exemption if you have a rich and powerful client. And we have to hold financial institutions accountable if they break the rules. I’ve written to Deutsche Bank’s CEO making that clear, and demanding answers.” 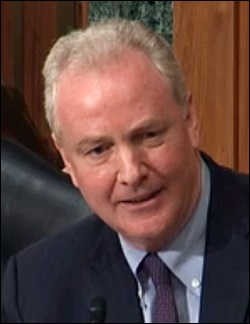 Brown and Van Hollen earlier had released a letter they had sent to Christian Sewing, the CEO of Deutsche Bank, on the matter of the report in the Times. Among the numerous questions it demanded answers to was this: “Who were the Private Wealth Management or other bank decision makers involved in these decisions?”

David Enrich, the author of the most recent article at the New York Times, had written an article in March of this year identifying Rosemary Vrablic as the Private Banker at Deutsche Bank to both Trump and Kushner. She is considered one of the most powerful Private Bankers in New York City. Clearly, the Senators wanted to know if a Private Banker could kill a Federally-mandated suspicious activity report for a politically-connected client.

The Trump bullying effect appears to be causing yet another disfigurement of government: Members of Congress seem to be afraid to show up and do their job at the Congressional Committees on which they sit out of fear of saying something that will earn the wrath of the President.

Money laundering through global banks, including those on Wall Street, is one of the greatest threats to the national security of the United States since it can be used to finance all sorts of illicit activity from bribes to public officials, drug dealing, terrorist financing and the like. Despite the critical nature of this hearing on Tuesday, 11 of the 12 Republican members who sit on the Senate Banking panel didn’t show up for the hearing. Senator Mike Crapo, the Republican Chairman of the Committee, and Senator Patrick Toomey, were the only two Republicans to attend. The following Republican Senators who sit on the Committee were missing in action: Richard Shelby, Tim Scott, Ben Sasse, Tom Cotton, Mike Rounds, David Purdue, Thom Tillis, John Kennedy, Martha McSally, Jerry Moran and Kevin Cramer.

That lack of turnout by Republicans contrasted against the Democratic Senators on the Committee who did show up to ask engaging questions of the panel’s witnesses: Sherrod Brown, Jack Reed, Mark Warner, Chris Van Hollen, Doug Jones and Kyrsten Sinema.

The other two witnesses who testified at Tuesday’s hearing were Steven D’Antuono, Section Chief, Financial Crimes Section of the Federal Bureau of Investigation and Grovetta Gardineer, Senior Deputy Comptroller for Bank Supervision Policy at the Office of the Comptroller of the Currency. (Their testimony is available here and here, respectively.)

When the history books finally look back on this era from an enlightened perspective, they will surely expend an enormous amount of ink examining how so few within the Republican Party had the courage and love of their country to speak out when faced with an insurmountable mountain of evidence of corruption.