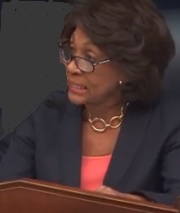 The Democrats are now in charge at the U.S. House of Representatives’ Financial Services Committee and they’re proving that they’re not afraid to take on the legions of Wall Street lobbyists and lawyers in order to do their job for the American people. Tomorrow, Democrats on the Committee will be grilling the CEOs of seven of the largest Wall Street banks. The Republican Committee members, if history is any guide, will be lauding the bankers based on talking points delivered by the banks’ public relations and lobbying firms.

Democrats took over the House in January and Congresswoman Maxine Waters became the Chair of the House Financial Services Committee at that time. Waters has served on this Committee for the past 28 years – a period in which she has observed unending frauds against the investing public by the mega banks on Wall Street.

In preparation for the hearing tomorrow, which begins at 9:00 a.m., the Committee released one of the most impressive Memorandums that we have seen in many years. One particularly notable aspect of the Memorandum is the amount of fines the mega banks (called G-SIBs or Global Systemically Important Banks) have paid over the past decade. According to the Committee:

Let that sink in for a moment. According to the Federal Deposit Insurance Corporation, as of April 4 there were 5,369 federally-insured financial institutions in the U.S. There are only 8 U.S. G-SIBS responsible for two-thirds of all fines since the financial crisis. That fact alone buttresses the oft-heard phrase from Senator Bernie Sanders that “the business model of Wall Street is fraud.”

According to a chart embedded in the Committee’s Memorandum (see below) Bank of America (parent of the giant retail brokerage firm Merrill Lynch, which succumbed to a shot-gun marriage with Bank of America during the financial crisis) was responsible for $76.1 billion of the $167 billion total for the U.S. G-SIBS or 46 percent. JPMorgan Chase – whose CEO, Jamie Dimon, regularly promotes himself as Presidential material and an advocate for the poor – paid $43.7 billion of the $167 billion total for U.S. G-SIBs or 26 percent of the total.

But JPMorgan Chase has one additional distinction that the other U.S. G-SIBs do not have. It has pleaded guilty to three criminal felony charges in just the past five years while Dimon remained at the helm of the bank as both Chairman and CEO. That is unprecedented in U.S. banking history.

Another chart provided in the Memorandum shows the ratio of CEO pay to the median worker. That chart also buttresses the argument that fraud at the mega banks is not a bug but a feature. Dimon, who has presided over three felony charges and the second largest number of fines, is making 364 times the compensation of the median worker at his bank, based on 2017 data.

The last time this many Wall Street bank CEOs were hauled before this Committee was on February 11, 2009 at the height of the financial crisis – which was caused by reckless gambling at the mega banks and incompetent federal regulatory oversight of Wall Street. Waters had this to say at that time:

Waters: Thank you very much, Mr. Chairman. This is an important hearing today. The question has been asked over and over again, what did the banks do with the taxpayer’s money? The taxpayers of America are very, very upset about the fact that they allowed the banks to borrow their money, the taxpayer’s money, in unprecedented amounts, billions of dollars. And when the taxpayers went back to the banks to say, may I have a loan, may I have a loan to buy a car, may I have a loan to pay my student fees, may I have a loan for a mortgage, the banks are saying, no. And to add insult to injury, the banks have sent out notices to credit card holders, taxpayers again who have loaned money to the big banks, the banks are saying to the credit card holders, oh, we’re going to increase your interest rates. We know that you were paying 13, 14, 15 percent already, but now it’s going to cost you 18, 19, 20 percent. So the taxpayers have lent their money to the big banks, who are supposed to be big-business persons, expertise in business management, who are failing, they’ve gone back to ask for some assistance, they’re being denied…”

The mega banks are still fleecing the public – charging upwards of 20 percent on some credit cards after hooking consumers with teaser rates while paying less than one percent on bank deposits in many cases. (See Jamie Dimon Laments the Plight of the Poor While His Bank Pays 0.02% on CDs.)

The three biggest threats to the U.S. financial system are the following: the mega banks’ prudential regulator, the Federal Reserve, has outsourced its work to the Federal Reserve Bank of New York – which is far too cozy with the big banks. Secondly, the threat of the hundreds of trillions of dollars of derivatives held by these banks blowing up at any time has yet to be addressed by Congress. Forcing these derivatives onto exchanges or onto central clearing parties as promised by the Dodd-Frank legislation of 2010 has yet to materially happen. The majority of derivatives are still opaque over-the-counter contracts between one financial institution and another with no regulator having enough concrete data to see how the dangers are building up. And finally, the mega banks are trading their own bank stock and that of their competitors in their own Dark Pools, effectively re-creating the situation that brought down Wall Street in 1929.

Derivatives and Dark Pools may not be sexy enough to make media headlines at a Congressional hearing. But making headlines is not the job of this Committee. Protecting the U.S. financial system is. Let’s hope someone among the 60 members of this Committee has the courage to question the banks on these topics.

Wells Fargo, one of the eight U.S. G-SIBs, will not be represented at tomorrow’s hearing since its CEO, Tim Sloan, was already grilled by the Committee on March 12. It can’t be comforting to this new round of bank CEOs appearing before the Committee that Sloan resigned his position at Wells Fargo just 16 days after the hearing. 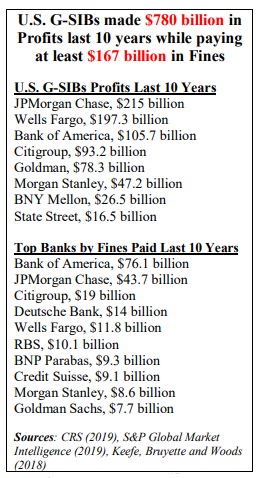