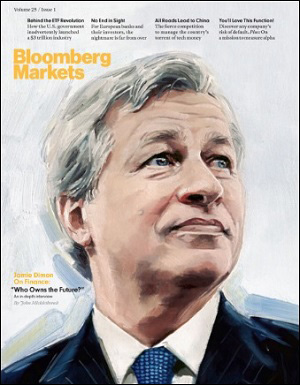 Since March 9 of last year, Bloomberg News has published over 80 negative articles on the mega bank Wells Fargo. Some of the more recent headlines are: Wells Fargo CEO Abruptly Steps Down, Succumbing to Scandals; Wells Fargo’s CEO Disputes Claim His Bank Is Too Big to Manage; Elizabeth Warren on Wells Fargo CEO’s Departure: ‘About Damn Time’.

Judging by the reporting, one would think that Wells Fargo is either the most dangerous U.S. mega bank or the most criminal. But according to Federal regulators, that distinction goes to JPMorgan Chase. But oddly enough, Jamie Dimon, the Chairman and CEO of JPMorgan Chase, has been canonized by Bloomberg News for years, effectively endorsing him as the all-wise and customer-focused oracle of Wall Street.

Wells Fargo has not been charged with a criminal felony count. Jamie Dimon, on the other hand, has presided, as CEO, over three criminal felony counts against JPMorgan Chase in just the past five years while, mysteriously, not losing his job and getting millions of dollars in raises and bonuses. JPMorgan Chase pleaded guilty to two felony counts in January 2014 for its role in facilitating the Bernie Madoff Ponzi scheme through the Madoff business bank account in the U.S., while telling regulators in the U.K. that the bank suspected a Ponzi scheme was occurring.

According to a 2016 report from the Government Accountability Office (GAO), JPMorgan Chase’s own bank customers lost “about $5.4 billion” in the Madoff scheme. The report notes:

“In 2014, DOJ [Department of Justice] assessed a $1.7 billion forfeiture – the largest penalty related to a BSA [Bank Secrecy Act] violation – against JPMorgan Chase Bank. DOJ cited the bank for its failure to detect and report the suspicious activities of Bernard Madoff. The bank failed to maintain an effective anti-money-laundering program and report suspicious transactions in 2008, which contributed to their customers losing about $5.4 billion in Bernard Madoff’s Ponzi scheme.”

On May 20, 2015, JPMorgan Chase pleaded guilty to another criminal felony count for the bank’s role in rigging foreign exchange markets. Dimon still kept his job.

Wells Fargo has also not been charged with losing more than $6 billion of its depositors’ money gambling in high-risk derivatives and then lying to its regulators about it. That distinction also goes to JPMorgan Chase in the 2012-2013 London Whale scandal. According to former Senator Carl Levin, who headed the U.S. Senate’s Permanent Subcommittee on Investigations’ nine-month probe into the matter, this is what happened:

“In April 2012, Americans were confronted with a story of Wall Street excess and the derivatives disaster now known as the JPMorgan Chase whale trades. The largest U.S. banks today are deep into derivatives, complex financial instruments that derive their value from other assets. The derivatives behind the JPMorgan whale trades were part of a so-called ‘Synthetic Credit Portfolio’ that essentially made outsized bets on whether particular financial instruments or entities were creditworthy or would default during specified time periods. The bets were made by traders in the London office of U.S. banking giant, JPMorgan Chase. Their trades – meaning their bets — grew so large that they roiled the $27 trillion credit derivatives market, singlehandedly affected global prices, and finally attracted a media storm aimed at finding out who was behind them. That’s when the media unmasked JPMorgan’s Chief Investment Office (CIO) which, until then, had been known for making conservative investments with bank deposits.

“At first, JPMorgan’s CEO Jamie Dimon claimed the April media reports about the whale trades were ‘a tempest in a teapot.’ But a month later, the bank admitted the truth: that their credit derivative bets had gone south, producing not only losses that eventually exceeded $6 billion, but also exposing a litany of risk management problems at what had been considered one of America’s safest banks.”

Levin summed up the scandal with this statement:

“Our findings open a window into the hidden world of high stakes derivatives trading by big banks. It exposes a derivatives trading culture at JPMorgan that piled on risk, hid losses, disregarded risk limits, manipulated risk models, dodged oversight, and misinformed the public. Our investigation brought home one overarching fact: the U.S. financial system may have significant vulnerabilities attributable to major bank involvement with high risk derivatives trading. The four largest U.S. banks control 90 percent of U.S. derivatives markets, and their profitability is invested, in part, in their derivatives holdings, nowhere more so than at JPMorgan.”

The four largest banks that control 90 percent of U.S. derivatives trading do not include Wells Fargo. They are JPMorgan Chase, Citigroup’s Citibank, Goldman Sachs and Bank of America.

JPMorgan Chase has the largest derivatives positions of any U.S. bank, standing at $48 trillion as of December 31, 2018 according to the Federal regulator of national banks, the Office of the Comptroller of the Currency.

Wells Fargo also did not become the subject of a book by two trial attorneys comparing the bank to the Gambino crime family nor has it paid as astonishing $36 billion in fines and restitution while the same CEO sat at the helm. That distinction also goes to JPMorgan Chase and its CEO Jamie Dimon.

The very same month, March 2016, that attorneys Helen Davis Chaitman and Lance Gotthoffer published their book, JPMadoff: The Unholy Alliance between America’s Biggest Bank and America’s Biggest Crook, Bloomberg featured Dimon on the front cover of its magazine, Bloomberg Markets, with a feature story inside that profiled Dimon as the whizz kid of Wall Street. There is no mention of any criminal felony charges in the article despite the fact that all three of those felony counts had occurred in the two years before the article was written. Dimon is allowed to have the last word in the Bloomberg article with this:

“I’ve always wanted to help build a better society and build a better company, and I always wanted a healthy, vibrant company, a healthy, vibrant society. We take care of our people, we provide them with opportunity. But I’ve always believed business is here to serve your clients, your shareholders, your communities. If we do this well, everyone benefits. We have to do a good job for all of them.”

This, on the other hand, is the JPMorgan Chase rap sheet that the trial attorneys reported in their book that was published the same day. (These charges are in addition to the two felony counts the bank pleaded guilty to in the Bernie Madoff matter in 2014):

In 2015, the New York Post reported that Bloomberg Markets magazine was going to cease to exist as a monthly magazine but would relaunch in 2016 as a “promotional tool” for the company’s financial news/data terminals. According to the article, the decision “came directly from Michael Bloomberg,” who is the majority owner of Bloomberg News. Michael Bloomberg derives his billionaire wealth from the data terminals his company leases to the global trading floors of banks like JPMorgan Chase.

The same year that Bloomberg Markets did its cover story on Dimon, Mike Bloomberg and Dimon co-authored an opinion piece for the opinion section of Bloomberg News known as Bloomberg View. During the London Whale scandal, Mike Bloomberg was Mayor of New York City. Mayor Bloomberg was quoted in the Wall Street Journal at the time calling Dimon  “a very smart, honest, great executive,” adding “The controls failed. He’ll look at that and fix it.”

It feels increasingly like Bloomberg News is functioning as Jamie Dimon’s P.R. agent rather than reporting the cold, hard facts of his tenure at the bank.