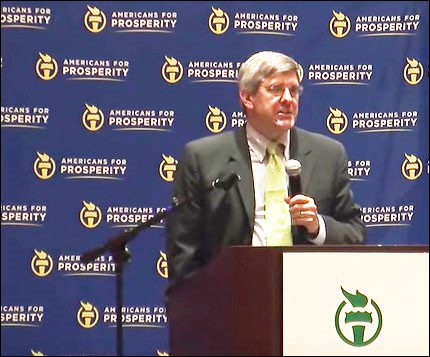 Stephen Moore Speaking at an Americans for Prosperity Dinner in Tulsa, Oklahoma April 14, 2016

The Koch brothers funded front group, Americans for Prosperity (AFP), has decided to scrub Stephen Moore’s history from its web site now that Donald Trump has proposed Moore to sit on the powerful central bank of the United States, the Federal Reserve Board of Governors. Google caches of Moore’s extensive history with the organization now lead to error messages.

But we know that Moore has been a featured speaker at Americans for Prosperity events around the country since at least 2009 because attendees have posted photos of him speaking at the events and there are also YouTube videos of his speeches. In one YouTube video where Moore spoke at an Americans for Prosperity event in Tulsa, Oklahoma on April 14, 2016, he called AFP “a great, great organization” and said “I’ve been doing a lot of events around the country for AFP.”

The billionaire Koch brothers, Charles and David, are majority owners of the fossil fuels juggernaut known as Koch Industries. Moore’s ties to the Koch brothers and his papers, speeches and books posturing on topics near and dear to their hearts go back decades. Moore has also been an attendee and speaker at the semi-annual, super-secretive political strategy meetings organized by Charles Koch to tilt U.S. elections to the right. In the book Sons of Wichita: How the Koch Brothers Became America’s Most Powerful and Private Dynasty by Daniel Schulman, the author writes that at a June 27-28, 2010 event at the St. Regis Hotel in Aspen, Colorado, Moore presented a talk titled “Understanding the Persistent Threats We Face.” That talk was tailored to please a bevy of Wall Street Masters of the Universe and old-money corporate heirs who were in attendance.

Moore has also sat on the Board of the super-secretive non-profit, Donors Capital Fund, which is used by Charles Koch and other right-wing donors to secretly sluice money to their climate denial front groups and other favorite causes. In 2008, Donors Capital Fund secretly funneled $17,778,600 into the obscure Clarion Fund so that it could release 28 million DVDs of the race-baiting documentary, Obsession: Radical Islam’s War Against the West.  This avalanche of DVDs was inserted in major newspapers across America just seven weeks before the Presidential election, in the midst of a whisper campaign that Presidential candidate Barack Obama was a Muslim. The DVDs flooded households in the swing voter states.  (See “Koch Footprints Lead to Secret Slush Fund to Keep Fear Alive,” Wall Street On Parade’s exclusive investigative report.)

Like the Koch brothers, Moore is a big fan of deregulation, privatization, small government (meaning gut the social safety net) and climate change denial. He penned the infamous “New York’s Climate Suit Against Exxon Is Like Salem Witch Trials” at Investor’s Business Daily in 2015.

Moore is also the former Director of Fiscal Policy Studies and a former Senior Fellow at the nonprofit Cato Institute. Not only was Cato funded by Koch money for decades but as Wall Street On Parade reported in 2012, Charles Koch was actually a secret part-owner of Cato dating back to 1977. David Koch joined his brother as a secret part-owner in 1991. (For how a U.S. nonprofit could have secret, private shareholders, see our in-depth report: Secret Owners of Cato Institute Surface as Koch Brothers Move to Take Control.)

There are a number of good reasons that a Koch-funded group would want to scrub their connection to Stephen Moore right now – major among them being that the Koch Industries front group, Freedom Partners, has already embedded a sizeable number of Koch loyalists in the Trump administration.

SourceWatch reported in April of last year that a dozen people who previously worked at Freedom Partners are now working in the Trump administration. Among that group was Marc Short, former Freedom Partners’ President, who became Director of Legislative Affairs for Trump. Short stepped down last year after achieving many of Freedom Partners’ stated demands.

Freedom Partners had quickly provided the Trump administration with a list of regulations it wanted gutted – like the Paris Climate accord (which Trump revoked on June 1, 2017) and numerous EPA rules – and threatened those lawmakers who didn’t get on board, writing that “Freedom Partners will hold lawmakers who oppose regulatory relief accountable for their positions.”

Equally of note, an unprecedented 12 lawyers from the giant Jones Day law firm headed to important posts in the Trump administration in one fell swoop on January 20, 2017 – Trump’s inauguration day. Jones Day had been a lead law firm for Koch Industries’ mergers and acquisitions for years as well as representing Freedom Partners.

Trump’s appointment of Larry Kudlow last year to become the Director of the National Economic Council was another triumph for the Koch agenda. In 2011, Wall Street On Parade wrote about Kudlow’s conflicts with the Mercatus Center, a nonprofit heavily linked to funding by the billionaire Koch brothers. We noted the following:

“One of those freedoms most treasured by the Koch brothers is their ability to see a research study done by one of their funded economics departments, then have its dubious data quoted from the mouth of a funded ‘news’ celebrity.  From 2002 through 2006, the Koch funded Mercatus Center paid Lawrence Kudlow, a CNBC co-host and later host of his own show, ‘The Kudlow Report,’ a total of $332,500 through his consulting arm, Kudlow & Co. LLC.  I obtained the information from public filings Mercatus made with the IRS.  It is not known if the Mercatus Center continued to pay Kudlow after 2006.  The Mercatus tax filings show $3.1 million paid in a line item called  ‘honoraria’ from 2001 through 2007. Emails and phone calls to Kudlow, the CNBC legal department, and three communications executives of both CNBC and NBC/Universal were met with silence, despite a week’s lead time to respond.”

In February of last year, Lee Fang and Nick Surgey, writing for The Intercept, revealed a secret memo from the Koch brothers’ sprawling network of wealthy donors, which lauded the major objectives it has achieved under Trump.

The ability of the Kochs to continue to realize their agenda in the Trump Presidency, a man who ran on a populist agenda, illustrates the abject failure of Congress and corporate media to do their jobs for the American people.