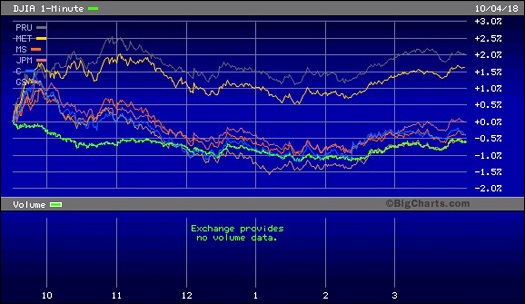 Add the stock market to the growing list of things that are not normal in the U.S. We’ll get to the details of yesterday’s appearance of a rigged market in a moment, but first a small sampling of the other abnormal ways the U.S. is currently functioning.

The U.S. has a President and Commander-in-Chief who is credibly accused by his own lawyer of engaging in political campaign fraud by paying hush money to women whose stories could have impacted the 2016 presidential election. The same President is credibly accused by the New York Times of engaging in tax fraud. That same man is also the subject of a criminal probe by Special Counsel Robert Mueller. And yet, Donald Trump is allowed to nominate a judge who will sit on the highest court in the land for a lifetime – a man who is, like the President himself, credibly accused of sexual assault by multiple women. That’s not normal in what is supposed to be a thriving democracy. It’s more compatible with a banana republic.

Then there is the FBI. The FBI has 35,000 employees and yet it didn’t spot the Trump family’s tax scams. It took three reporters at the New York Times, doing the work the FBI should have been doing, to report the facts to the American people this week. Even more striking, and compatible with a plutocracy rather than a democracy, the FBI is now taking its orders from Donald Trump and curtailing the scope of its investigation of Supreme Court nominee Brett Kavanaugh. The taint of Trump has been allowed to spread to the FBI and the U.S. Supreme Court – two critical institutions in which the American people must have confidence but no longer will. None of this is normal.

According to news reports, there is a likelihood that Republicans will vote to seat Kavanaugh on the highest court in the land. Those 51 yes votes would stand in contrast to the 2400 no votes from law professors across the U.S. who have signed a letter to the U.S. Senate indicating that they believe Kavanaugh is unfit to sit on the highest court. It’s not normal in a democracy for 51 politicians to listen to the special interests (like the fossil fuels industry) who want Kavanaugh seated and  vote against 2400 of the wisest members of the legal profession on a judicial nominee. It effectively means the U.S. is now a corporatist state where wealthy special interests have supplanted representative government of the people.

Against this backdrop comes what looks like a cartel operating on Wall Street yesterday. Not to put too fine a point on it, but major Wall Street banks have already been charged with rigging Libor (the benchmark interest rate) and foreign exchange markets. In other words, the suggestion that Wall Street might attempt to rig the stock market is not a wild leap.

A big drop in Dow Jones Industrial Average futures typically portends a negative open for the stock market. That’s what happened yesterday. When the Dow opened at 9:30 a.m., it initially fell modestly and then tanked by 200 points in less than an hour. At its low of the day, it had lost 356 points and by the closing bell was down 200.9 points. The S&P 500 Index was also negative from the opening bell, closing down 23.90 points.

The big losses in the stock market were predominantly attributable to a big spike in interest rates – particularly the benchmark 10-year U.S. Treasury note. That unusual interest rate spike should have meant that the big Wall Street bank stocks would have led the decliners from the get-go of trading. Instead, in the strangest action I have seen in 32 years, the shares of Citigroup, JPMorgan Chase, Morgan Stanley and Goldman Sachs spiked upward at the opening bell and that spike lasted for almost the next half hour. Then, as if someone had pressed another button, all four of the bank titans began to lose ground within minutes of each other. Citigroup and JPMorgan Chase entered their downward trajectory at exactly 9:48 a.m.; Morgan Stanley and Goldman Sachs began their slump four minutes later at 9:52 a.m. (Goldman Sachs closed modestly lower on the day while the other three banks closed modestly higher.)

And here’s where things really got interesting yesterday. We took a look at two of the insurance companies that were singled out in the 2017 Financial Stability Report from the U.S. Treasury’s Office of Financial Research for having derivatives exposure to big Wall Street banks: MetLife and Prudential Financial. Those stocks not only also spiked at the open but both companies closed in the green yesterday.

Markets are supposed to be efficient. An efficient market would know that the derivatives dangers are still concentrated among a handful of big Wall Street banks and life insurance companies. A spike in interest rates is going to throw a wrench into the gears of those trades. And since trillions of dollars of those trades are still black holes, written privately between two parties as over-the-counter contracts, the typical reaction is to sell all the stocks of the major suspects first and ask questions later. That’s what a normal market would do. This was not normal.

It’s also not normal for the U.S. Justice Department and the Securities and Exchange Commission to continue to allow these serially-charged Wall Street banks to effectively operate their own, secret, internal stock exchanges where they are allowed to trade their own bank stock and the bank stocks of their competitors. (See related articles below.)

Those of us who chronicle the rise of tolerated corruption in the U.S. understand that for the general public it’s akin to watching a goldfish grow in a large tank of water. If you’re not paying close attention, you don’t notice that the subtle changes become big ones over time. Democracies, unfortunately, die as a result of a lot of little changes that go uncorrected over time.