If you thought the U.S. outlook could not get any more dystopian, think again. JPMorgan Chase issued a report earlier this week to mark the 10th anniversary of the 2008 Wall Street crash and provide its outlook for what’s ahead. JPMorgan suggests that the next financial crash may be so cataclysmic that the Federal Reserve may have to enter the market to buy up stocks – something which the central bank has never done before in the U.S. or, at least, acknowledged doing, because stock ownership is heavily skewed to the one percent.

JPMorgan further suggests that if the Fed did take this unprecedented step, it might lead to pitchforks in the street (our phrase) as a class war breaks out. (Imagine the Occupy Wall Street protests in 2011 and 2012 and then amplify that by years of pent up anger.)

This is how Marko Kolanovic, a JPMorgan analyst writing in the report, puts it:

“It remains to be seen how governments and central banks will respond in the scenario of a great liquidity crisis. If the standard interest rate cutting and bond purchases do not suffice, central banks may more explicitly target asset prices (e.g., equities). This may be controversial in light of the potential impact of central bank actions in driving inequality between asset owners and labor.”

Kolanovic adds this about the social unrest: 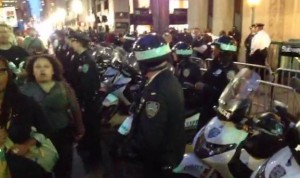 NYPD at May 1, 2012 Occupy Protests in Manhattan

“The next crisis is also likely to result in social tensions similar to those witnessed 50 years ago in 1968. In 1968, TV and investigative journalism provided a generation of baby boomers access to unfiltered information on social developments such as Vietnam and other proxy wars, civil rights movements, income inequality, etc. Similar to 1968, the internet today (social media, leaked documents, etc.) provides millennials with unrestricted access to information on a surprisingly similar range of issues. In addition to information, the internet provides a platform for various social groups to become more self-aware, polarized, and organized. Groups span various social dimensions based on differences in income/wealth, race, generation, political party affiliations, and independent stripes ranging from liberal to alt-right movements to conspiracy theorists and agents of adversary foreign powers. In fact, many recent developments such as the U.S. presidential election, Brexit, independence movements in Europe, etc., already illustrate social tensions that are likely to be amplified in the next financial crisis.”

Notice what “social tension” the JPMorgan analyst is leaving out: the actual battle cry of the Occupy Wall Street protesters who chanted “Banks got bailed out, we got sold out” as they staged sit-ins at the mega Wall Street banks, marched on the New York Fed, and camped outside of Goldman Sachs’ CEO Lloyd Blankfein’s Central Park West luxury residence.

It’s the height of audacity for JPMorgan Chase, a bank that has spent tens of billions of dollars buying back its own stock over the years in order to goose its stock price, to now suggest that the U.S. central bank might need to become the buyer of last resort when the stock market melts down as a result of malinvestment.

This is not the first time that a Wall Street savvy guy has looked into his crystal ball and seen pitchforks in the future. In 2014 venture capitalist Nick Hanauer, an early investor in Amazon, bylined an article at Politico with the title: The Pitchforks Are Coming…For Us Plutocrats. Hanauer warned his fellow plutocrats as follows:

“…I have a message for my fellow filthy rich, for all of us who live in our gated bubble worlds: Wake up, people. It won’t last.

“If we don’t do something to fix the glaring inequities in this economy, the pitchforks are going to come for us. No society can sustain this kind of rising inequality. In fact, there is no example in human history where wealth accumulated like this and the pitchforks didn’t eventually come out. You show me a highly unequal society, and I will show you a police state. Or an uprising. There are no counterexamples. None. It’s not if, it’s when.”