Company Involved in Massachusetts Gas Explosions Has History of Blasts 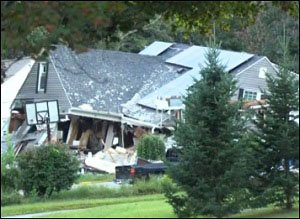 Over 60 Homes Were Damaged by Fire and at least Three Exploded in Massachusetts on September 13, 2018 as a Result of a Natural Gas Pipe Problem.

As thousands of people were fleeing their coastal homes in the Carolinas yesterday to be safe from the approaching wrath of Hurricane Florence after five days of warnings, thousands more were forced from their homes in Lawrence, Andover, and North Andover, Massachusetts yesterday. The Massachusetts evacuations came without prior warning as more than 60 homes erupted in flames yesterday and at least three exploded from a natural gas malfunction involving the utility company, Columbia Gas of Massachusetts.

Andover Fire Chief Michael Mansfield told local reporters that “It looked like Armageddon,” saying he could see “billows of smoke coming from Lawrence behind me” and “pillars of smoke in front of me from the town of Andover.”

The Associated Press reported that “some local officials described scenes of panic as residents rushed to evacuate, many wondering if their homes would be next to erupt in flames. In North Andover, town selectman Phil Decologero said his entire neighborhood had gathered in the street, afraid to enter their homes. Just a few streets down, he said, homes were burning.”

As of early this morning, local news channels were reporting one person was dead and approximately 25 individuals were injured in the fires.

The Massachusetts Emergency Management Agency has initially suggested the possibility that gas lines became over-pressurized but a full investigation will be conducted, including one by Federal authorities including the National Transportation Safety Board.

In a statement on their website, Columbia Gas referred to the disaster as an “incident” and said “crews need to visit each of the 8,600 affected customers to shut off each gas meter and conduct a safety inspection.”

Columbia Gas of Massachusetts is a division of NiSource, a company that trades publicly on the New York Stock Exchange under the symbol “NI.” In its most recent 10k annual report for 2017 filed with the Securities and Exchange Commission, it included this as one of its risk factors:

“We have risks associated with aging infrastructure assets. The age of these assets may result in a need for replacement, a higher level of maintenance costs and unscheduled outages despite efforts by us to properly maintain or upgrade these assets through inspection, scheduled maintenance and capital investment. The failure to operate these assets as desired could result in gas leaks and other incidents and in our inability to meet firm service obligations, which could adversely impact revenues, and could also result in increased capital expenditures and maintenance costs, which, if not fully recovered from customers, could negatively impact our financial results.”

Yesterday, just hours before chaos would descend on the three towns in Massachusetts, Columbia Gas sent out a letter indicating it would be “upgrading natural gas lines in neighborhoods across the state.” The letter linked to a video which carried this statement in the accompanying text:

“As with many other types of infrastructure, like roads, dams, and bridges, deterioration occurs over time and repairs or replacement are eventually needed. The old gas pipes installed in your neighborhood generations ago served us well, but they are now ready to be retired.”

Pipes installed “generations ago” raise the question as to whether the pipes should have been upgraded long before now. The video shows deeply corroded metal pipes being replaced with “state-of-the-art plastic” pipes “more suited for underground use.”

The video warned that there could be “temporary inconvenience” while the modernization program was underway. The video moderator also stated that “Our goal is always to keep any service interruption to a minimum…Care and caution are taken throughout the entire process, ensuring your safety and limiting any inconvenience.”

On March 10, 2014, the National Transportation Safety Board found that a NiSource division, Columbia Gas Transmission Corporation, was responsible for not conducting timely inspections that would have detected external corrosion on a pipeline that ruptured in West Virginia and blew up homes there. The NTSB wrote:

“On December 11, 2012, a 20-inch high-pressure natural gas pipeline running through Sissonville, W.V., ruptured with so much force that a 20-foot-long segment of pipe was thrown more than 40 feet from where it had been buried. The released natural gas ignited and burned so hot that it heavily damaged the asphalt road surface on an interstate highway, destroyed three homes, and melted the siding on houses hundreds of feet from the rupture site.”

The NTSB report found that the pipeline at issue had not been inspected since 1988. Following the NTSB’s investigation, it made multiple safety recommendations to the company and monitored its compliance. On December 15, 2017, the NTSB closed its file noting that the company had taken “acceptable action.”

Another accident investigated by the NTSB on a Columbia Gas unit occurred on October 24, 1979. The NTSB file indicates that “an explosion and fire destroyed the county clerk’s office building and the adjoining court house building, gutted a connecting building which was under construction, and damaged the adjacent houses in Stanardsville, Virginia. It notes further that “13 persons were injured and property was damaged extensively.”

In that case, the NTSB recommended that Columbia Gas “change its operating maintenance plan to include specific procedures to cover the part of the service lines identified under company policy as ‘customer service lines’ in the same manner as company-owned service lines.” This NTSB document appears to suggest that Columbia Gas refused to accept the recommendation of the NTSB initially, then later acquiesced.