Will Fed Chair Powell Respond to Trump’s Jabs in His Jackson Hole Speech? 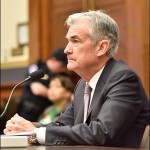 The Chairman of the Federal Reserve, Jerome Powell, is slated to deliver a speech on Friday morning at an annual symposium in Jackson Hole, Wyoming. President Donald Trump has made it known that he wants some economic help from the Fed in terms of keeping interest rates low. Speaking of Powell directly, Trump told Reuters yesterday: “I’m not thrilled with his raising of interest rates, no. I’m not thrilled.” All eyes on Wall Street will be watching for any hints in Powell’s speech that he’s sending a message to Trump that he won’t be taking any loyalty oath to the President.

But aside from possible coded messaging to Trump to take his jackboot off the Fed’s turf, there are other important reasons to pay attention to the Jackson Hole gathering.

It’s called the Federal Reserve Bank of Kansas City’s Economic Policy Symposium, or simply “Jackson Hole,” but as the attendee breakdown above indicates, it’s a central bankers’ summit. Between the U.S. Fed and global central bankers, government attendees are outnumbered 14 to 1. Also note that global banks (“financial organizations”) also outnumber “government” representatives, who are given a paltry five slots. This attendee breakdown will not surprise you if you have read Nomi Prins’ brilliant book released on May 1, Collusion: How Central Bankers Rigged the World.

Prins compares the colluding central banks, with the U.S. Fed leading the herd, to a “financial world war.” Prins writes that “Conjured money was the weapon of choice,” to deal with the 2008 financial crash. Prins says: “Fabricated funds went toward subsidizing the private banking system and buying government debt, corporate debt, and stocks. By providing the grease that kept money flowing, central bankers superseded governments – they set the cost of money and provided the confidence in ongoing liquidity – the world was their battlefield.”

Prins further makes the point that what these central banks are doing is providing artificial stimulus to markets – the opposite of what free markets are all about.

The powerful central bankers know that what they have to say will move markets (because they are the markets now) so the names of the speakers and copies of their speeches are being tightly guarded. The Kansas City Fed indicates in a press release that the program for the symposium will be available at www.KansasCityFed.org at the start of the event at 6 p.m. (Mountain Time) this Thursday. The papers presented at the symposium and speeches will be posted at the same website “as they are delivered.”

The Kansas City Fed’s press release did contain this nugget regarding what at least some of the papers and speeches will attempt to address:

“Within product markets, there has been a notable increase in economic activity associated with large multinational corporations along with increased market concentration in many industries. These developments suggest that large firms today may have greater market power than in the past, and this shift may result in a decrease in competition within many industries. These shifts should concern central bankers since they likely have important linkages to observed structural changes in the global economy, including lower capital investment, a declining labor share, slow productivity growth, slow wage growth and declining dynamism.”

This would be a good time to mention that it was the U.S. Federal Reserve that gave its blessing to the following Wall Street buyouts and mergers during the financial crash of 2008: JPMorgan Chase bought Bear Stearns and Washington Mutual; Bank of America bought Merrill Lynch; and Wells Fargo bought Wachovia. The Fed also made more than $16 trillion in secret loans, at almost zero interest rates, to prop up the mega banks, including the then insolvent Citigroup, which received more than $2.5 trillion in cumulative loans. (See graph from the audit by the Government Accountability Office below.)

Prins writes in her book that “Eight years after the crisis began, the Big Six US banks – JPMorgan Chase, Citigroup, Wells Fargo, Bank of America, Goldman Sachs, and Morgan Stanley – collectively held 43 percent more deposits, 84 percent more assets, and triple the amount of cash they held before. The Fed has allowed the biggest banks on Wall Street to essentially double the risk that devastated the system in 2008.”

Prins notes further that the big Wall Street banks “that inhaled this cheap money were not required to increase their lending to the Main Street economy as a condition of the availability of that money…Wall Street used its easy access to cheap money to increase speculation in derivatives and other complex securities. They used it to buy back their own shares, thus effectively manipulating their own stock – in broad daylight and with explicit approval from the Fed.”

As a result of the Fed’s hubris in 2008 and its subsequent, unprecedented experiments with quantitative easing (a quaint name for buying up Wall Street’s toxic waste) not only have the Wall Street mega banks become even more dangerously interconnected but the central banks themselves have become dangerously interconnected, where rumors of tightening by a central bank on a different continent can now send U.S. stocks plummeting.

When the academics speak about “market concentration” at the Jackson Hole symposium, let’s hope someone has the temerity to point a finger at the Fed.