U.S. Media’s Use of Its Collective Voice Reveals a Tragic Truth about America 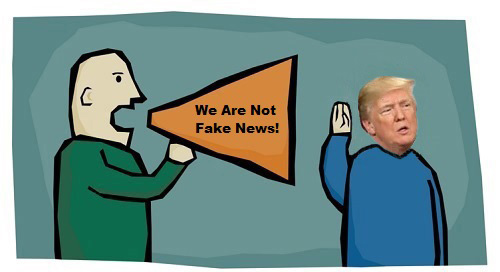 August 16, 2018 will be remembered as the day there was a collective awakening by America’s media that there was something intrinsically and morally and constitutionally wrong with not just the functioning of the President of the United States – but with America itself.

In response to an August 10 appeal from the Boston Globe to newspaper editorial boards around the country to write and publish their thoughts on Trump’s “dirty war against the free press,” more than 300 newspapers responded yesterday.

The Globe’s own editorial yesterday contained one of the most poignant phrases, stating that the President tosses out lies about the media “much like an old-time charlatan threw out ‘magic’ dust or water on a hopeful crowd.” You can read the coast-to-coast outpouring of editorials on what a free press means to democracy here.

One of the most profound, and disturbing, editorials yesterday came not from a newspaper but from The Atlantic magazine. Written by Dan Rather and Elliot Kirschner, the editorial invoked the founding fathers’ creation of “three branches of government with distinct powers and responsibilities that had to answer to one another” plus the 10 amendments to the constitution to protect citizen rights, and a free press established under the first amendment. Rather and Kirschner, who last year co-authored What Unites Us: Reflections on Patriotism, also wrote this in the editorial:

“Where would America be without the muckrakers of the progressive era, like Ida Tarbell, who uncovered the perfidy and immorality of the Standard Oil monopoly under John D. Rockefeller; without The New York Times’ publication of the Pentagon Papers, which exposed the lies around the Vietnam War; without the dogged work of The Boston Globe in documenting sexual abuse within the Catholic Church? Because of the press, powerful institutions were held accountable for their actions, and we became a stronger nation.”

Rather and Kirschner could not have picked a worse week to tell Americans that our nation was stronger because of the investigative work of the Boston Globe into sexual abuse within the Catholic Church. The courageous reporters at the Boston Globe published their work in 2002. Today, 16 years later, we are not a stronger nation because of that work. A grand jury report was released this week detailing the raping of children by priests in Pennsylvania with many of the criminals and conspirators still evading prosecution and in positions of power within the church. NBC News wrote this assessment:

“Sexual abuse has been institutionalized, routinized and tolerated by the church hierarchy for decades. If you think this statement is hyperbole, consider that the grand jury report includes, but is by no means limited to, the case of a ring of pedophile priests in Pittsburgh, who raped their male victims, took pornographic pictures of them and marked them by giving them gold crosses to wear so that they could be easily recognized by other abusers.”

The NBC article said that this grand jury report “shows the church is a criminal syndicate.” The Associated Press called the church’s conduct “the weaponization of faith.” The Philadelphia Inquirer provided more examples of the atrocities by priests against children.

A strong nation buttressed by a strong press would never have allowed this conduct to be exposed in 2002 and yet continue to this day. A genuinely free and courageous press would not have allowed Pope Francis to visit the United States and address a joint session of Congress in 2015 without calling him out on the continuing sexual abuse of children and the coverups within the church. (See our 2015 article: Pope Francis to Lecture Congress on Morals Today As Priest Victims Say Abuse Rages On.)

A strong nation and a courageous free press would be able to differentiate and articulate to readers how religious freedom does not include tolerance of an institutionalized, criminal culture that permits raping of little children and passing them around between priests like inanimate sex toys and moving the priests from parish to parish to continue the abuse. This is, tragically, not the first time we are hearing about pedophile priests passing around the same child. Maureen Dowd, a Catholic, described in 2011 in the New York Times the same kind of pedophile ring abusing a fifth grade boy who eventually “fell apart and turned to heroin.” That report came from an earlier grand jury report.

And then there is that reference by Rather and Kirschner to the heroism of the New York Times in publishing the Pentagon Papers and exposing “the lies around the Vietnam War.” That occurred in 1971 – 47 years ago. What has the New York Times done for the country since?

In the leadup to the bogus U.S. invasion of Iraq in 2003, it was the New York Times using its bullhorn to cheer on the attack. As media watchdog Media Matters’ Eric Boehlert wrote in 2014:

“[Ahmed] Chalabi was reportedly the main source of bogus information that former Times reporter Judith Miller used in her thoroughly discredited work about Iraq’s supposedly brimming stockpile of weapons of mass destruction. It was Chalabi who wove Saddam Hussein fiction and it was Miller, then a widely respected Pulitzer Prize-winning journalist, who gave it the Times stamp of approval as the paper did its part to lead the nation to war.”

The Watson Institute at Brown University released a study last November on the trillions of dollars that the U.S. has spent on the Iraq war and subsequent wars in the region, writing this:

“…a full accounting of any war’s burdens cannot be placed in columns on a ledger. From the civilians harmed and displaced by violence, to the soldiers killed and wounded, to the children who play years later on roads and fields sown with improvised explosive devices and cluster bombs, no set of numbers can convey the human toll of the wars in Iraq and Afghanistan, or how they have spilled into the neighboring states of Syria and Pakistan, and come home to the US and its allies in the form of wounded veterans and contractors. Wars also entail an opportunity cost — what we might have done differently with the money spent and obligated and how veterans’ and civilians’ lives could have been lived differently.”

Trump’s cruelty pales in comparison to the atrocities inflicted on human beings by the Catholic Church and the war in Iraq – in which the free press served the nation as an inadequate guardian.

The New York Times also played an outsized role in another event that has cost America dearly in trillions of dollars of fiscal spending and an economy that has experienced subpar economic growth for a decade.

We’re speaking of the New York Times editorial page’s incessant cheerleading for the repeal of the Glass-Steagall Act – the 1933 Banking Act which separated banks holding Federally-insured deposits from the casino investment banks on Wall Street. The Glass-Steagall Act had kept the U.S. financial system safe for 66 years until its repeal in 1999 – at the urging of the New York Times and Wall Street lobbyists. Just nine years after its repeal, the U.S. financial system collapsed, producing the worst economic meltdown since the Great Depression, including the loss of millions of jobs and millions of homes to foreclosure.

On April 8, 1998, the editorial board of the New York Times lavished praise on a proposed bank merger that would create Citigroup and force the repeal of the Glass-Steagall Act. The Times wrote:

“Congress dithers, so John Reed of Citicorp and Sanford Weill of Travelers Group grandly propose to modernize financial markets on their own. They have announced a $70 billion merger — the biggest in history — that would create the largest financial services company in the world, worth more than $140 billion…In one stroke, Mr. Reed and Mr. Weill will have temporarily demolished the increasingly unnecessary walls built during the Depression to separate commercial banks from investment banks and insurance companies.”

Removing what the Times called “unnecessary walls” ended up like this: the U.S. national debt which stood at $9 trillion at the end of 2007 has now doubled to more than $21 trillion, a significant part of that coming from fiscal spending to offset the ravages of the financial crash. Citigroup, the bank the New York Times applauded for its brilliant merger plans, crashed in 2008 and became a 99 cent stock by March 2009. Shareholders who have hung in since 2007 have lost 88 percent in the value of their stock. Weill walked away before the crash as a billionaire from his obscene stock grants. Reed retired in 2000 with hundreds of millions of dollars from Citigroup stock sales, a $5 million retirement bonus and a retirement pension of at least $2,019,528 annually.

Taxpayers were left to foot the bill: Citigroup received $2.5 trillion of secret Federal Reserve loans from late 2007 to the middle of 2010. In addition, Citigroup received $45 billion in capital from the U.S. Treasury; the Federal government guaranteed over $300 billion of Citigroup’s assets; the Federal Deposit Insurance Corporation (FDIC) guaranteed $5.75 billion of its senior unsecured debt and $26 billion of its commercial paper and interbank deposits. This was the largest bank bailout in global banking history.

And finally, one of the worst things the New York Times has done is to brazenly refuse to correct outrageously erroneous reporting on the cause of the 2008 crash, seemingly attempting to downplay the impact of its call for the repeal of the Glass-Steagall Act.

We have repeatedly asked the New York Times to correct the reporting of Andrew Ross Sorkin over the past five years, including as recently as January of this year when we wrote to the new Publisher, Arthur Gregg (A.G.) Sulzberger, who had promised that under his tenure the Times “will hold itself to the highest standards of independence, rigor and fairness — because we believe trust is the most precious asset we have.”

After we emailed Sulzberger, we immediately received an automated reply stating:

“If you have pointed out an error, the article will be corrected online and a correction appended; a correction will also appear in print editions as soon as possible…When an issue of accuracy is raised, at least three editors review the query. Often re-reporting is requested; sometimes the issue is turned over to our research department.”

To this day, that is the last word we’ve heard from the New York Times on this matter, raising the very real possibility that Sorkin’s article wasn’t written in error but was actually written as propaganda for the New York Times’ hometown industry, Wall Street, which doesn’t want Congress to reenact the Glass-Steagall Act because it would gut its institutionalized wealth transfer system which pays depositors meager interest while the Wall Street banks leverage those deposits for wild derivatives schemes that book billions in profits for the banks.

It’s time to reassess if America’s free press has the courage and independence and might it needs to fulfill the role that our founders envisioned and which democracy needs to survive.