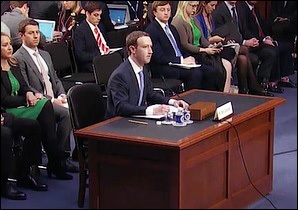 Remember the late 90s when the Masters of the Universe on Wall Street were bringing to market anything that smelled of technology or had a dot com after its name. That all ended  badly with the Nasdaq stock index losing 78 percent of its value from 2000 to 2002. This is how Ron Chernow correctly described what was happening for New York Times’ readers on March 15, 2001:

“Let us be clear about the magnitude of the Nasdaq collapse. The tumble has been so steep and so bloody — close to $4 trillion in market value erased in one year —  that it amounts to nearly four times the carnage recorded in the October 1987 crash.”

Chernow characterized the Nasdaq stock market as a “lunatic control tower that directed most incoming planes to a bustling, congested airport known as the New Economy while another, depressed airport, the Old Economy, stagnated with empty runways. The market functioned as a vast, erratic mechanism for misallocating capital across America,” Chernow observed.

Let that sink in for a moment. It wasn’t just that investment bankers on Wall Street were bringing to the public markets companies with the equivalent of a business plan written on the back of a napkin. It was that all of the major investment banks on Wall Street, out of a motive of pure greed, were engaged in a mass conspiracy to misallocate capital across America – which strikes at the very heart of America’s economy and national interests.

Yesterday we got a little taste of what’s in store this time around courtesy of the Masters of the Universe on Wall Street, the majority of whom have “buy” ratings on Facebook. In extended hours trading, Facebook’s shares lost more than 20 percent of their value as management was forced to deal with what its technology had created: a wild west landscape where Russians could set up fake accounts and meddle in the 2016 U.S. presidential election and where Cambridge Analytica could “harvest” tens of millions of users’ private Facebook data to help the Republican campaign. (Facebook’s share price is off 19 percent in early morning trading on the Nasdaq stock exchange.)

MarketWatch reported that Facebook’s CFO, David Wehner, said yesterday on the company’s earnings call with analysts that Facebook’s “total revenue-growth rates will continue to decelerate in the second half of 2018, and we expect our revenue-growth rates to decline by high-single-digit percentages from prior quarters sequentially in both Q3 and Q4” while Wehner expects expenses to grow 50 to 60 percent year over year. The big jump in expenses is ostensibly to invest in people and products to tame its wild west platform.

Facebook’s public image wasn’t helped by its CEO, Mark Zuckerberg, being hauled before Congress on April 10 to explain how a company then valued at almost half a trillion dollars (it closed yesterday at $629.8 billion) could have been so lax in how it was allowing its business to be conducted. 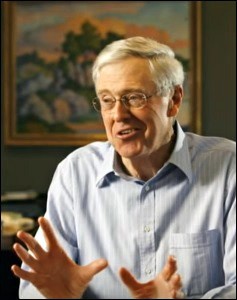 Charles Koch, CEO of Koch Industries, Has Not Been Hauled Before Congress

Then there is our investigative report published on Monday at CounterPunch detailing how one of the largest private companies in the world, Koch Industries, based in the bastion of America’s midwestern values, Wichita, Kansas, is turning itself into a technology powerhouse to create a massive voter database and micro-targeting operation to unabashedly meddle in this year’s U.S. midterm elections.

To put what Koch Industries is doing in perspective, it is majority-owned by two billionaires, Charles and David Koch, worth $51 billion each according to Forbes. It is also a sprawling multi-national conglomerate with interests in fossil fuels, pipelines, chemicals, commodities trading, and paper products. What is this kind of industrial giant with its own anti-climate science, anti-regulatory agenda doing messing in U.S. elections on this grand scale, effectively rendering the Republican National Committee’s voter database to the standing of an antiquated relic?

Another question is this: With the Koch network’s money backing so many Republicans in Congress, can Americans ever expect to see Koch Industries CEO, Charles Koch, hauled before Congress as Mark Zuckerberg was?

And, finally, there is JPMorgan Chase – which most people think of as the Chase commercial bank and JPMorgan, the Wall Street investment bank. But, it turns out, it has bizarrely transformed itself into a giant technology company.

In 2014, CEO Jamie Dimon revealed in his annual letter to shareholders that JPMorgan Chase employs “nearly 30,000 programmers, application developers and information technology employees who keep our 7,200 applications, 32 data centers, 58,000 servers, 300,000 desk-tops and global network operating smoothly for all our clients.”

The company’s Chief Information Officer, Anish Bhimani, told the Information Networking Institute at Carnegie Mellon that JPMorgan has “more software developers than Google, and more technologists than Microsoft…we get to build things at scale that have never been done before.”

One of the things JPMorgan is supposed to be building at scale is risk management systems to oversee its massive derivatives portfolio. According to the Office of the Comptroller of the Currency, the Federal regulator of national banks, as of March 31, 2018 JPMorgan Chase has $54.76 trillion in notional (face amount) of derivatives.

Those legions of IT folks at JPMorgan Chase, unfortunately, were asleep at the switch in 2012 when its London traders made hundreds of billions of dollars in risky derivatives bets and Jamie Dimon told the press that the rumors swirling about those bets were a “Tempest in a Teapot.” Dimon’s risk technology software was apparently not showing him that his bank was suffering steep losses and that the bank was on its way to losing $6.2 billion of depositors’ money.

Dimon was also hauled before Congress to testify on the scandal that became known as the London Whale. In 2013 the OCC released a cease and desist consent order against the bank in the matter, saying it found that the bank “has engaged in unsafe or unsound banking practices….” The OCC also criticized a long list of failings on the part of JPMorgan and its management, writing as follows:

“(a) The Bank’s oversight and governance of the credit derivatives trading conducted by the CIO [Chief Investment Office] were inadequate to protect the Bank from material risks in those trading strategies, activities and positions;

“(b) The Bank’s risk management processes and procedures for the credit derivatives trading conducted by the CIO did not provide an adequate foundation to identify, understand, measure, monitor and control risk;

“(c) The Bank’s valuation control processes and procedures for the credit derivatives trading conducted by the CIO were insufficient to provide a rigorous and effective assessment of valuation;

“(d) The Bank’s internal audit processes and procedures related to the credit derivatives trading conducted by the CIO were not effective; and

“(e) The Bank’s model risk management practices and procedures were inadequate to provide adequate controls over certain of the Bank’s market risk and price risk models.”

What all of this simply boils down to is that computer technology can become dangerous to a corporation and to America’s national security interests if there is not moral and competent top management overseeing its use.