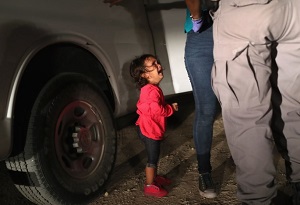 This Viral Photo by Pulitzer Prize Winning Photographer John Moore of Getty Images Captures the Trauma of a Two-Year Old Girl from Honduras at the U.S. Southern Border

Over the past 24 hours, everyone from the Pope to Fox TV producers to foreign leaders like U.K. Prime Minister Theresa May to top corporate CEOs like Apple’s Tim Cook to U.S. airlines (who learned they had unwittingly transported snatched children hundreds of miles away from their parents) spoke out in condemnation of President Donald Trump’s inhumane policy to forcibly remove children and toddlers and babies as young as three months old from their immigrant parents attempting to enter the United States at our southern border. In many of these cases, the parents were attempting to pursue asylum applications after fleeing deadly gang violence in their central American country.

The outcry and repulsion of this policy of taking children from their lawful parents, without due process, and incarcerating them in internment camp conditions reached a fever pitch yesterday with longtime GOP strategist Steve Schmidt announcing he was leaving the Republican Party. Schmidt told the Daily Beast’s Nico Hines:

“Make no mistake about it when you’re ripping breastfeeding children away from their mothers and putting them in detention facilities, that’s an evil policy. To see the Republican Party break up the way it has, to lose its moral compass, it is tragic. It’s tragic for me personally, but I won’t be part of it. I won’t share a party label with people who think it’s all right to put babies in internment camps. My fidelity is to my country, not my political party. Country first.”

The nation’s largest doctor organization, the American Medical Association, also spoke out yesterday, stating that: “It is well known that childhood trauma and adverse childhood experiences created by inhumane treatment often create negative health impacts that can last an individual’s entire lifespan.” That condemnation followed a statement earlier this week to CBS by Dr. Colleen Kraft, President of the American Academy of Pediatrics, who had visited one of the detention centers holding toddlers. Dr. Kraft called this policy of separating children from their parents a form of child abuse, adding: “This type of trauma can be long lasting and it’s difficult to recover from this. We know very young children who are exposed to this type of trauma go on to not develop their speech, not develop their language, not develop their gross and fine motor skills and wind up with developmental delays.”

By yesterday afternoon the vocal outrage had reached such a crescendo that Trump apparently realized it was not going to be quelled by further lies from his administration. His administration has previously said it had no official policy to separate immigrant children from their parents – in the face of overwhelming evidence to the contrary and documentation that 2,300 children had been separated over just the prior two months. (Exactly how many children have been separated has yet to be reliably reported due to stonewalling by the Trump administration.) Trump had also previously said he could not sign an Executive Order to stop this practice, and yet, he did just that yesterday, stating that “I didn’t like the sight or the feeling of families being separated.”

That statement, of course, only added to the outrage that the policy had not been vetted by medical professionals in advance of its implementation to determine the neurological and psychological damage it could do to infants, toddlers and children. It was only when it upset the obsessive, TV-watching pleasure of the Emperor-King (and numerous polls came out showing that two-thirds of Americans opposed it) that Trump backed down.

Unfortunately, the Executive Order Trump signed yesterday was written with the same dodgy language that Trump has turned into an art form in the past. The Order read in part:

It was not the 1997 court order or Congress, however, that instituted the policy of grabbing children from their immigrant families. Previously, first-time illegal entry was treated as a misdemeanor and families were given a court appearance date and released on their own recognizance. According to experts in this area, over 90 percent of the parents showed up for their court dates. It was the Trump administration’s “zero tolerance” policy that was officially announced in April that permanently incarcerated the parents until their cases were heard and ordered that the children be held in separate detention.

Last evening, MSNBC’s Chris Hayes reported that there is growing evidence that the Trump policy of taking children from their immigrant parents began many months ago, further accentuating the fact that the public has been denied information on how many children have been impacted and where these children are being held.

Hayes reported on an El Salvadorian mother who had her 14-month old son taken last year. She explained how it took her 85 days to get her son back. The mother says the infant was returned to her with lice and so traumatized that she couldn’t leave his sight without him crying out for her.

Both Hayes and today’s edition of the New York Times report that the plight of the children who have already been separated remains up in the air and that the Federal government has no concrete, current plans to immediately reunite them with their parents.

As a result of local sleuthing, it has also been reported in the last 24 hours that the separated children are being shipped all over the United States – making the ability of their parents to locate them even more of an uphill battle. NY1 television showed footage yesterday of five young girls being led around the streets of Harlem after midnight, ending up at a foster agency in East Harlem. According to the report, “Governor Andrew Cuomo said those girls were part of the approximately 2,000 kids recently separated from their parents along the southern border.”

Michigan is also housing some of the separated children. Yesterday the Detroit Free Press reported the following:

“…in the middle of the night, two baby boys arrived in Grand Rapids after being separated from their immigrant parents at the southern border weeks ago.

“One child is 8 months old; the other is 11 months old. Both children have become part of a bigger group of 50 immigrant children who have landed in foster care in western Michigan under the Trump administration’s zero-tolerance border policy.”

What is happening to these children is a crime against humanity and those who fail to speak out are enablers to this newly ramped up cruelty by the Trump administration. 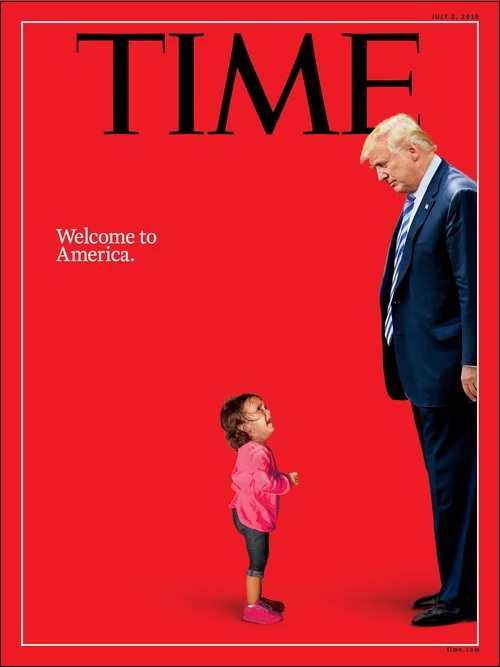