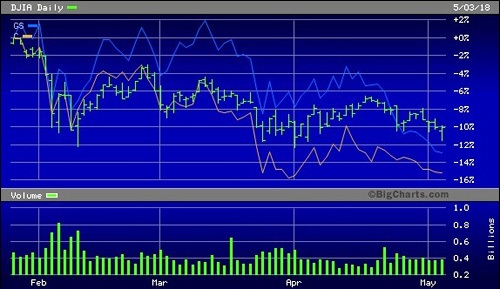 On January 26 of this year, the Dow Jones Industrial Average set a record high of 26,616.71. It has been backing and filling since then but the trend line has been decidedly down. Yesterday, the Dow closed at 23,930.15 – almost 2700 points lower than its high set in January, despite the passage of a massive corporate welfare tax cut and hundreds of billions of dollars in announced stock buybacks. (Just this week, Dow component Apple announced it would be implementing a new $100 billion share repurchase program.)

Yesterday, the Dow closed just barely in positive territory after having been down almost 400 points intraday. But, notably, big Wall Street bank stocks such as JPMorgan Chase, Citigroup, Goldman Sachs, Bank of America and Morgan Stanley all closed the day in the red. These banks share a common feature – and risk – together they control the vast majority of derivatives traded in the U.S. while also owning commercial banks holding insured deposits – the combustible mixture that the Dodd Frank financial reform legislation of 2010 was supposed to correct, but didn’t.

President Obama Holds Press Conference With Financial Stability Oversight Council Members on March 7, 2016 and Falsely Declares that Vast Majority of Derivatives Are Being Cleared in Clearinghouses

For us here at Wall Street On Parade, the most troubling day of Barack Obama’s presidency came at a March 7, 2016 press conference when he told what we documented to be a monster lie to the American people. Worse yet, his Wall Street regulators who flanked him at this press conference undoubtedly knew that what the President was saying was light years away from the truth, and yet, they remained silent.

The lie was about his Dodd-Frank reform of derivatives, the financial weapons of mass destruction that had blown up iconic Wall Street firms and the mega insurer AIG less than eight years prior to Obama’s press conference, leading to the largest U.S. taxpayer bailout in global banking history. Obama told the public at that March 7, 2016 press conference that when it comes to derivatives “you have clearinghouses that account for the vast majority of trades taking place.”

Either Obama was dangerously uninformed or he was willfully ignorant. His own Federal agency that oversees all national banks, the Office of the Comptroller of the Currency, had reported for four consecutive quarters that the vast majority of derivatives were still not centrally cleared. For the fourth quarter of 2015, the OCC reported that just “36.9 percent of the derivatives market was centrally cleared.”

Despite this well-documented reality, President Obama told the public the following in his press conference of March 7, 2016:

“Irresponsible, risky bets with inadequate safeguards and that reward executives who take those risks greatly, can cause enormous damage to our economy overall…

The president had been taking heat on the derivatives issue because Citigroup effectively re-wrote the Dodd-Frank financial reform legislation in December 2014 when it successfully pushed for an amendment to the must-pass spending legislation needed to keep the government running. The amendment allowed Citigroup and the other mega Wall Street banks to keep their riskiest assets – derivatives – in their banking units that are backstopped with FDIC deposit insurance which is, in turn, backstopped by the U.S. taxpayer. This put the U.S. taxpayer squarely back on the hook for the next Wall Street meltdown.

It’s now more than two years since Obama held that press conference. Has the Trump administration drained the derivatives swamp? Not at all according to the 2017 fourth quarter report from the OCC, which explains:

On the most dangerous part of the derivatives market – credit derivatives – the OCC had this to report:

This disgraceful history of “reforming” Wall Street makes Trump’s push for more Wall Street deregulation look as well-vetted as his cabinet picks. And it could pose a re-election problem for the Wall Street Democrat wing of the Democratic party who continue to cling to the Obama legacy.