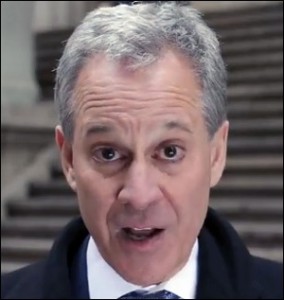 The reporters on the story are Jane Mayer, one of the most accomplished investigative reporters in the U.S., and Ronan Farrow, a recent recipient of the 2018 Pulitzer Prize for Public Service for his series of articles on movie producer Harvey Weinstein’s history of sexual assaults on numerous women.

The accounts of the four women involving Schneiderman are nothing short of horrifying. Two of the women, Michelle Manning Barish and Tanya Selvaratnam, went on the record using their names. Barish was involved with Schneiderman on and off for about two years from 2013 until New Year’s Day in 2015. Selvaratnam lasted for approximately one year from approximately the middle of 2016 until the fall of 2017 according to the article.

The abuse three of the women describe they endured while continuing in the relationship with Schneiderman paints a portrait of battered woman syndrome – a condition where women blame themselves or believe their abuser when he says he is sorry.

“In the privacy of intimate relationships, I have engaged in role-playing and other consensual sexual activity. I have not assaulted anyone. I have never engaged in nonconsensual sex, which is a line I would not cross.”

The account by Barish suggests that Schneiderman was unfit to serve as New York State Attorney General and that there are very likely more women still to come forward. Barish says Schneiderman called her a “whore,” slapped her during sex without her consent, forced her to drink alcohol, ridiculed her appearance and threatened to kill her if she left him. Barish also reported that Schneiderman appeared to have an alcohol and drug dependency, stating on the record that Schneiderman “would almost always drink two bottles of wine in a night, then bring a bottle of Scotch into the bedroom. He would get absolutely plastered five nights out of seven.” Barish recounts one incident when Schneiderman “literally fell on his face in my kitchen, straight down, like a tree falling.”

Barish told the reporters that “Schneiderman also took prescription tranquilizers, and often asked her to refill a prescription that she had for Xanax, so that he could reserve ‘about half’ the pills for himself.”

Selvaratnam, a native of Sri Lanka with dark skin, said Schneiderman called her his “brown slave,” “spat at her and choked her.” After a time, she says, “we could rarely have sex without him beating me.”

Not boding well for the women of New York is the CNN report last night that the Manhattan District Attorney, Cyrus Vance, has opened an investigation into the assault allegations against Schneiderman. Vance is not particularly known for his ability or willingness to prosecute sex crimes by powerful men. In May of 2011, a New York grand jury indicted the powerful former head of the International Monetary Fund, Dominique Strauss-Kahn. At the time, Strauss-Kahn was believed to be the leading candidate to become the next President of France. The indictment resulted from allegations that Stauss-Kahn had sexually assaulted a maid, Nafissatou Diallo, in his luxury suite at the Sofitel Hotel in Manhattan. But then Strauss-Kahn unleashed his powerful legal team and global PR firm and by August Vance had dropped the case. (See our prior coverage here and here.)

In addition, as the New Yorker article explains, Vance was being investigated by Schneiderman’s own office for how Vance had handled previous sexual assault allegations against Harvey Weinstein. In a 2015 case, Vance declined to bring charges against Weinstein despite a referral from the New York City Police Department. According to published reports, the Vance investigation lasted two weeks and then the matter was dismissed. In contrast, Ronan Farrow, a reporter without any of the law enforcement tools held by Vance (like subpoenas) was able to conduct a 10-month investigation and turned up three rape charges and multiple sexual assaults.

What is particularly humiliating for the State of New York is that this is just the latest in a long string of corrupt behavior by elected officials in the state. (See our 2013 report for CounterPunch, New York is Drowning in Bribes and Corruption.) The charges, indictments and prison terms of members of the New York State legislature are so extensive that they now need a database to keep track of them.

And let’s not forget that New York is home to Wall Street — an industry allowed to run its own private justice system while collapsing the entire U.S. financial system in 2008 under the weight of its own corruption. No meaningful reform of that situation has occurred either at the Federal or State level.