Giuliani Was Wrong: Even Children are “Disposable” in Gaza 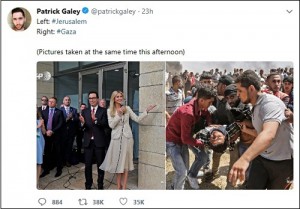 Patrick Galey, Reporter for AFP, Tweets this Split Image on May 14, 2018 as U.S. Embassy Opens in Jerusalem

Donald Trump’s lawyer, Rudy Giuliani, made the bizarre remark on Fox News recently that Jared Kushner might be “disposable” because men, in general, are disposable. Kushner is Trump’s son-in-law who was safely protected as he delivered a speech at the opening of the U.S. Embassy in Jerusalem yesterday. What played out in Gaza yesterday was very different: under the Trump administration, all Palestinians in Gaza are “disposable,” even children.

According to news reports this morning, more than 60 Palestinians died in Gaza yesterday with more than 2,000 injured. The United Nations reports that eight of those dead are children under the age of 16. The massacre was the direct result of the Israeli military firing live bullets at protesters.

But Donald Trump’s White House doesn’t see it that way. At a press briefing yesterday, White House Deputy Press Secretary Raj Shah was asked about Israel’s “kill at will” policy toward the demonstrators. Shah replied: “We believe Hamas, as an organization, is engaged in cynical action that’s leading to these deaths.”

As the outrage grew in the U.S. and internationally against the grotesque images yesterday of Ivanka Trump leading the celebrations occurring at the U.S. Embassy and the dead children being carried out in Gaza, anger spilled out across social media.

Israel has been successful heretofore in effectively using a propaganda sound bite to brush away those who challenge its most horrific human rights violations. If you are a journalist criticizing its massacres, you’re an “anti-semite.” If you’re a prominent Jew criticizing it, you’re a “self-hating” Jew. If you’re a human rights organization assessing its massacres of unarmed protesters as a violation of international law, you’re opposing Israel’s right to defend itself. But after Israel’s outrageous conduct yesterday, challenges to its propaganda war have gained momentum.

Hollywood producer, Judd Apatow, an American Jew,  struck back at a person on Twitter who attempted to defend Israel’s actions. Apatow wrote on his Twitter page:

“You have lost your humanity. You watch these images and see a game, not the death of children. This provocation and the killing of the Iran deal is going to set fire to the region. This is like Bush thinking he was going to spread freedom but he opened a Pandora’s Box.”

Doctors Without Borders called Israel’s conduct “unacceptable and inhuman,” writing that “This bloodbath is the continuation of the Israeli army’s policy during the last seven weeks: shooting with live ammunition at demonstrators, on the assumption that anyone approaching the separation fence is a legitimate target. Most of the wounded will be condemned to suffer lifelong injuries.”

Princeton Professor of Religion and African American Studies, Eddie Glaude Jr., appeared on MSNBC and said blaming Palestinians for their own deaths was like blaming civil rights marchers for the violence they had endured.

In a report on the Gaza protests of March 30 of this year, the international human rights organization, Human Rights Watch, assessed Israel’s conduct against demonstrators as follows:

“Both before and after the confrontations, senior officials publicly said that soldiers stationed along the barrier that separates Gaza and Israel had orders to target ‘instigators’ and those who approach the border. However, the Israeli government presented no evidence that rock-throwing and other violence by some demonstrators seriously threatened Israeli soldiers across the border fence. The high number of deaths and injuries was the foreseeable consequence of granting soldiers leeway to use lethal force outside of life-threatening situations in violation of international norms, coupled with the longstanding culture of impunity within the Israeli army for serious abuses…

“The Israeli government has not shown that the demonstrators throwing rocks or Molotov cocktails posed a grave threat to the well-protected soldiers deployed on the other side of the border fence, nor has Israel claimed that any Palestinian crossed the border on March 30.

“Human Rights Watch reviewed footage it believes authentic based on an interview with the videographer that appears to show a demonstrator shot in the leg while praying and another video showing a man shot while throwing a rock. Other videos reviewed appear to show demonstrators shot while slowly walking toward the border empty-handed or holding only a Palestinian flag or retreating from the border. Interviews with six witnesses, including three journalists, indicated that soldiers shot at men who were in the area between the encampments and the fence but who posed no grave threat to anyone across the fence.”

“The juxtaposition of images of dead and wounded Palestinians and Ivanka Trump smiling in Jerusalem like a Zionist Marie Antoinette tell us a lot about America’s relationship to Israel right now. It has never been closer, but within that closeness there are seeds of potential estrangement.”