First Republic: Meet the Bank at the Center of the Michael Cohen Scandal 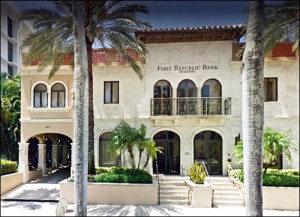 It’s about a six-minute drive from Donald Trump’s luxurious Mar-a-Lago resort in Palm Beach, Florida to the palm-lined street where First Republic Bank has a branch to service the super wealthy. It is not known if Donald Trump has an account at this branch, but according to Trump’s Federal financial disclosure report, he maintains a checking account at First Republic Bank.

It would not be surprising this morning if everyone from the CEO on down at First Republic Bank wanted to erase the names Cohen and Trump from their memory banks. The stock of First Republic Bank is publicly traded on the New York Stock Exchange. The bank caters, almost exclusively, to the super wealthy. The Wall Street Journal reported in 2016 that Facebook CEO Mark Zuckerberg, worth $72.5 billion today according to Forbes, is a client at First Republic Bank.

The bank’s business model of opening branches in tony towns on the East and West Coasts has proven a winning strategy. According to company reports, its deposits have grown from $18 billion in mid 2010 to $68.9 billion as of December 31, 2017. The FDIC reports that 100 percent of its deposits are domestic – meaning it has no foreign money.

That is now being called into question as a result of the nightly media appearances by Stormy Daniels’ attorney, Michael Avenatti. According to Avenatti, $500,000 that came into Cohen’s First Republic Bank account is tied to the Russian oligarch, Viktor Vekselberg, now on a U.S. sanctions list and closely tied to Russian president Vladimir Putin. The $500,000 came from a U.S.-based company, Columbus Nova, which has denied any corporate ties to Vekselberg. However, those clever folks at Think Progress, used the Wayback machine to access the Columbus Nova website as of January of 2017 where Columbus Nova is listed as a subsidiary of Renova Group, Vekselberg’s Russian company.

The people and businesses who have direct or indirect connections to Cohen’s account at First Republic are starting to mount up. They include AT&T, which has confirmed paying Cohen $600,000 for advice, and the giant Swiss pharmaceutical company, Novartis, which has admitted to transmitting $1.2 million to the Cohen account in order to seek “insights” on Trump. Both AT&T and Novartis confirmed to the New York Times that they had been contacted last November “by investigators for the special counsel, Robert S. Mueller III….” According to a report by CNN yesterday, also questioned by Mueller’s team was Vekselberg – the Russian oligarch tied to the $500,000 that found itself in Michael Cohen’s Essential Consultants LLC account at First Republic Bank.

Another connecting dot is Trump’s longtime personal friend, Tom Barrack, who served as Chair of Trump’s Inaugural Committee. According to the Associated Press, Barrack has also been interviewed by Mueller’s investigators. Barrack is the Founder of Colony Capital, LLC, now known as ColonyNorthstar, where he continues to serve as Executive Chairman. Barrack served on the Board of Directors of First Republic Bank from 2001 through 2007 and from 2010 to the present. The bank was previously owned by Merrill Lynch, which was absorbed into Bank of America during the financial crash in 2008. In 2010, Barrack’s Colony Capital was part of a buyout team that included General Atlantic LLC which put up “$1.86 billion in new equity capital” to purchase the bank according to a press release issued by First Republic Bank. On November 29, 2010, the bank sold shares to the public in an Initial Public Offering.

According to First Republic Bank’s 2018 annual proxy statement, Barrack owns 12,335 shares in the company. At this morning’s opening price of $97.06, that’s about $1.2 million – not a particularly large amount of money for a man that Forbes estimated to be worth $1 billion in 2013.

According to the Washington Post, “It was Barrack who persuaded Trump to hire political operative Paul Manafort — whom Barrack first met in Beirut 40 years ago — for the presidential campaign.” Manafort has been indicted by a grand jury convened in the Mueller probe.

Yesterday, it was widely reported that the U.S. Treasury’s Inspector General has opened an investigation into the leak of financial documents from First Republic Bank. Stormy Daniels’ attorney, Avenatti, has released information that would seem to have only come from Customer Account Cards inside the bank or documents seized in the raid on Cohen by the FBI in the Southern District of New York or from the Mueller investigation.

In a document released by Avenatti on his Twitter page, precise details from the Customer Account Card for Essential Consultants LLC at First Republic Bank appears to have been provided to him. Avenatti writes:

“In connection with the establishment of that account, Mr. Cohen was required to make certain representations to First Republic regarding Essential’s business as part of First Republic’s Know Your Customer (‘KYC’) anti-money laundering protocol.

“In order to establish the account, Mr. Cohen subsequently submitted information claiming, among other things, the following:

(a) Essential is a real estate consulting company that collects fees for investment consulting work;

(b) The company’s typical clients are U.S.-based high net worth individuals;

(c) The company’s primary source of funds will be derived from within the U.S. or a U.S.-based company;

(e) No outgoing wire transfers and debits related to ACH or electronic transfers were expected; and

(f) Receipts of the business would be internally transferred to Mr. Cohen’s personal account at First Republic Bank.

According to the Wall Street Journal, First Republic Bank filed a Suspicious Activity Report (SAR) with the U.S. Treasury’s FinCen unit on the Cohen account. Avenatti has said at least three SARs have been filed with FinCen related to this matter. In early April, Avenatti wrote to U.S. Treasury Secretary Steve Mnuchin requesting that the SARs information be released to the public, citing numerous legal case precedents for doing so. Thus far, Mnuchin has not supplied the information.