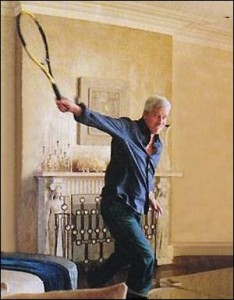 Jamie Dimon, Chairman and CEO of JPMorgan Chase, Featured this Photo of Himself on a Previous Holiday Card

Last week the CEO of Apple, Tim Cook, gave a harsh critique on how Facebook is making its money. Cook told an MSNBC Town Hall: “The truth is we could make a ton of money if we monetized our customer, if our customer was our product. We’ve elected not to do that.”

Cook has good reason to believe that Facebook has “monetized” its customers. After a whistleblower from the data mining company, Cambridge Analytica, exposed that Facebook had allowed the private information on 50 million Facebook users to be exploited for micro-targeting on behalf of the Trump presidential campaign, the company has come under withering criticism.

Yesterday, in a press conference, Mark Zuckerberg, the CEO of Facebook, conceded to reporters that the privacy breach by Cambridge Analytica could have affected as many as 87 million Facebook users. The company also announced that most of its billions of users may have had their profiles scraped, writing:

“Until today, people could enter another person’s phone number or email address into Facebook search to help find them. This has been especially useful for finding your friends in languages which take more effort to type out a full name, or where many people have the same name. In Bangladesh, for example, this feature makes up 7% of all searches. However, malicious actors have also abused these features to scrape public profile information by submitting phone numbers or email addresses they already have through search and account recovery. Given the scale and sophistication of the activity we’ve seen, we believe most people on Facebook could have had their public profile scraped in this way. So we have now disabled this feature. We’re also making changes to account recovery to reduce the risk of scraping as well.”

Facebook had previously entered into a consent decree with the U.S. Federal Trade Commission in 2011 that barred it from “making any further deceptive privacy claims, requires that the company get consumers’ approval before it changes the way it shares their data, and requires that it obtain periodic assessments of its privacy practices by independent, third-party auditors for the next 20 years.” In the 2011 matter, the FTC charged Facebook with conduct that appears to be very similar to today’s issues, raising the possibility that it has violated its consent decree with a Federal regulator. The FTC charged Facebook with the following in 2011:

“In December 2009, Facebook changed its website so certain information that users may have designated as private – such as their Friends List – was made public. They didn’t warn users that this change was coming, or get their approval in advance.

“Facebook represented that third-party apps that users’ installed would have access only to user information that they needed to operate. In fact, the apps could access nearly all of users’ personal data – data the apps didn’t need.

“Facebook told users they could restrict sharing of data to limited audiences – for example with ‘Friends Only.’ In fact, selecting ‘Friends Only’ did not prevent their information from being shared with third-party applications their friends used.

“Facebook had a ‘Verified Apps’ program & claimed it certified the security of participating apps. It didn’t.

“Facebook claimed that it complied with the U.S.- EU Safe Harbor Framework that governs data transfer between the U.S. and the European Union. It didn’t.”

In a Q&A with the press last week, Zuckerberg was asked by multiple reporters if he should step down as CEO. Zuckerberg said “life is about learning from the mistakes” and indicated he has no intention of stepping down. But based on the FTC charges in 2011 and the scandal today, it doesn’t seem like Zuckerberg learned anything from the lessons of 2011.

In many ways, Zuckerberg is a young clone of the CEO of JPMorgan Chase, Jamie Dimon. Both are billionaires. Both have failed to confront their business models of human exploitation and both CEOs have kept their jobs through scandals – raising the question as to whether the failings at the companies are a bug or a feature.

During the Town Hall last week, Apple’s Tim Cook said this about corporate governance: “We’re like the guy in the corner store – what you sell in that store says something about you.”

What Dimon has sold in his “corner store” has resulted in three criminal felony counts by the U.S. Justice Department since 2014. The abuses to its customers have been so systemic and recurring that two trial lawyers set up a website to chronicle the charges and urge a boycott of JPMorgan Chase. Despite paying out more than $36 billion of shareholder money to settle the charges, Dimon continues to hold the title of both Chairman of the Board and CEO of the company, perhaps because of the lavish compensation paid to his Board of Directors.

But customers are not the only form of human exploitation at JPMorgan Chase and other mega Wall Street banks. In 2014 when JPMorgan Chase was experiencing bizarre worker deaths, including leaps from its buildings, Wall Street On Parade reported that Wall Street’s big banks are ghoulishly benefiting from the death of workers. If that’s not monetizing the worker as a “product” to be exploited, we don’t know what is. We wrote at the time:

“The series of strange deaths has brought unwelcome attention to the fact that mega banks like JPMorgan Chase are allowed to secretly collect life insurance proceeds on the lives of their employees, and former employees, without disclosing the amounts to the families, or the public, or their shareholders. (Other corporations are likewise engaged in this practice.) The payments are a closely guarded secret between the companies and the insurers who collect the lucrative premiums.

“While New York City based banks, insurance companies and other corporations received an estimated $3.5 to $4 billion in death benefits on the lives of workers killed during 9/11, according to a June 2003 presentation made by Ron Colligan to the Society of Actuaries, specific details on amounts received on a company-by-company basis have not been made public.

“The death benefits among all U.S. corporations may now exceed $1 trillion and are growing annually. The practice is called Bank-Owned Life Insurance (BOLI) where banks are involved and Corporate-Owned Life Insurance (COLI) for other corporations. As we reported last month, just four of Wall Street’s largest banks (JPMorgan, Bank of America, Wells Fargo and Citigroup) hold a total of $68.1 billion in Bank-Owned Life Insurance assets. According to Michael Myers, an expert on BOLI and COLI and a partner in the Houston, Texas law firm McClanahan Myers Espey, L.L.P., those assets could potentially mean that just these four banks are holding $681 billion in face amount of life insurance on their workers, or possibly even more.

“The cash buildup in the policies (mostly universal or whole life) is recorded as tax free income to the company and the death benefit is also received tax free. While the banks are not required to publicly report the number of workers they insure, or the life insurance amount per individual, or breakout the income they derive annually from deaths (it’s typically lumped in with numerous other items as ‘other income’) they do report in public filings to regulators the cash value amount and the year over year growth in cash value. As of December 31, 2013, JPMorgan held $17.9 billion in BOLI assets and had reported a gain of $686 million in the cash buildup. (The $17.9 billion in BOLI assets could represent as much as $179 billion or more in life insurance in force on employees, past and present.)”

Wall Street On Parade filed a Freedom of Information Act request (FOIA) with the regulator of national banks, the Office of the Comptroller of the Currency in 2014, seeking the following information:

“The number of deaths from 2008 through March 21, 2014 on which JPMorgan Chase collected death benefits; the total face amount of BOLI life insurance in force at JPMorgan; the total number of former and current employees of JPMorgan Chase who are insured under these policies; any peer studies showing the same data comparing JPMorgan Chase with Bank of America, Wells Fargo and Citigroup.”

The OCC denied our request in its entirety, stating that the information was “privileged or contains trade secrets, or commercial or financial information, furnished in confidence, that relates to the business, personal, or financial affairs of any person,” or  relate to “a record contained in or related to an examination.”

In reality, the “trade secrets” are the ghoulish means in which Wall Street banks are minting billionaire CEOs while “monetizing” both customers and workers through exploitive means.

The question for all Americans is this: are we willing to tolerate corporate profits through any means.

If Elizabeth Warren Wants to Probe Worker Abuse on Wall Street, Start With the Unprecedented Rash of Deaths and Suicides