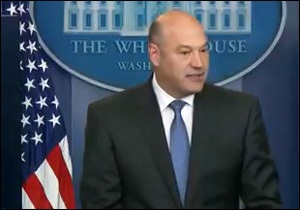 It’s not like Cohn, the former President of Goldman Sachs who became President Donald Trump’s first Director of the National Economic Council, didn’t understand Trump’s obsessive demand for loyalty. Cohn has watched for more than a year as those who didn’t show adequate subservience to the President were shown the door. In the case of the former FBI Director James Comey, he was not only fired by Trump but was then savagely ridiculed by the President as a “nut job” and a “grandstander.”

So Cohn had to know that when he mounted his own counter-offensive to the President’s tariff plan that he was in serious breach of the loyalty code enforced above all else by the leader of the “free” world.

The stock market’s reaction on Thursday, March 1 to the tariff announcement by Trump was to sell off by as much as 586 points before closing down 420. Trump then sent his pro-tariff advisers, Peter Navarro and Commerce Secretary Wilbur Ross, off to the airwaves to knock down concerns raised by his own party that the plan would trigger damaging trade wars against the United States.

Cohn then did the unthinkable. He effectively assembled his own team of anti-tariff executives to hold a meeting with the President to change his mind on following through with his plan to impose the tariffs on steel and aluminum, even with countries like Canada, Mexico and the European Union, who are U.S. allies. Cohn’s plan was for executives from automakers and beverage manufacturers who are heavy users of imported steel and aluminum and would be hurt by the tariffs, to meet with Trump tomorrow at the White House to make their strong counter arguments.

The unwritten loyalty oath clearly does not permit counter-offensives against the iron-will of the President. By last night, Cohn was out and the Thursday meeting he had planned was cancelled by the White House.

There is the possibility that Trump may have been goaded by negative television ads into his abrupt decision to move ahead with the tariffs. Just days before Trump made his tariff announcement on March 1, the Alliance for American Manufacturing began running a TV ad shaming the President for his unfulfilled campaign promises. The advertisement states:

“We heard the promises. Now it’s time for action. President Trump, America’s workers are counting on you to protect our jobs and to defend our national security. It’s time to keep the promise and to protect American Steel.”

After the news broke last evening after the stock market closed that Cohn would join an unprecedented exodus from the Trump administration, Dow futures were down more than 350 points. After about one minute of trading this morning, the Dow is down 309 points.

The name currently being circulated by the media as a potential replacement for Cohn is Larry Kudlow, a CNBC commentator with libertarian leanings. In 2011, Wall Street On Parade wrote about Kudlow’s conflicts with the Mercatus Center, a nonprofit heavily linked to funding by the billionaire Koch brothers. We wrote:

“One of those freedoms most treasured by the Koch brothers is their ability to see a research study done by one of their funded economics departments, then have its dubious data quoted from the mouth of a funded ‘news’ celebrity.  From 2002 through 2006, the Koch funded Mercatus Center paid Lawrence Kudlow, a CNBC co-host and later host of his own show, ‘The Kudlow Report,’ a total of $332,500 through his consulting arm, Kudlow & Co. LLC.  I obtained the information from public filings Mercatus made with the IRS.  It is not known if the Mercatus Center continued to pay Kudlow after 2006.  The Mercatus tax filings show $3.1 million paid in a line item called  ‘honoraria’ from 2001 through 2007.   Emails and phone calls to Kudlow, the CNBC legal department, and three communications executives of both CNBC and NBC/Universal were met with silence, despite a week’s lead time to respond.

“The Center for Public Integrity had this to say about the Mercatus Center in 2006:

“In 2005, Rep. Bob Ney, R-Ohio, whose office has accepted 19 trips from Mercatus — more than any other — introduced a bill to amend the Clean Air Act and require the secretary of energy to construct 15 new gasoline refineries and sell them to private businesses.  Mercatus has sought to weaken the act and spoken of the need for more refineries — both scenarios that could benefit Koch Industries.

“ ‘Neither the congressman nor his staff has ever had a single conversation with anyone from Mercatus about that bill,’ said Brian Walsh, communications director for Ney. ‘He introduced that bill to reduce America’s dependence on foreign countries for oil. We have not had a new refinery built in this country in over 20 years.’

“Mercatus spent at least $227,000 on more than 400 trips for lawmakers and their aides from 2000 through mid-2005. Most of this money appears to have been spent on the group’s annual retreat for congressional chiefs of staff, who are often put up in posh hotels near Washington and attend seminars on public policy.

“While Congress is in session Mercatus also conducts regular seminars in congressional office buildings, where staffers are offered free meals and given lectures on issues such as health care, telecommunications regulation and tort reform.

“ ‘There is no conceivable argument of why this group has not registered to lobby. They have met the threshold that makes them a lobbying group,’ said [Craig] Holman of Public Citizen… ‘The Mercatus Center does not engage in lobbying,’ Carrie Conko, the organization’s communications director, said in a written statement for this story.”

In 2016, Wall Street On Parade took another hard look at the right-wing front groups that were heavily involved in the Trump campaign.

In late February, Lee Fang and Nick Surgey, writing for The Intercept, revealed a secret memo from the Koch brothers’ sprawling network of wealthy donors, which lauded the major objectives it has achieved under Trump.

If Kudlow or a similar Koch agenda devotee replaces Cohn, there may be no stopping the Kochs from consolidating their power in the White House.