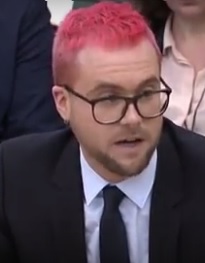 Wylie is testifying before the British lawmakers because the same people and companies involved in the social media data mining and micro-targeting for Trump’s presidential campaign were also involved in the June 23, 2016 Brexit vote in the U.K. where citizens voted in a referendum to take the U.K. out of the European Union.

Wylie testified that a Canadian company, AggregateIQ (AIQ), developed the software for Cambridge Analytica, describing it as a “proxy” firm and “money laundering operation.” He stunned some lawmakers with this testimony:

“AggregateIQ, in part because it was set up and works within the auspices of Cambridge Analytica, inherited a lot of the company’s culture of total disregard for the law…

Wylie was read a statement by a lawmaker from AIQ’s website where they deny corporate involvement with Cambridge Analytica. Wylie said it is true they are a separate company but he referred to a new article available at Gizmodo which proves that AIQ created Cambridge Analytica’s software. The article, in fact, reveals the alarming information that the code for the software program was left available on a publicly accessible website. (It has since been removed, according to the article.)

Wylie told the British lawmakers that the evidence uncovered in that article shows that there is “tangible proof in the public domain that AIQ actually built Ripon, which is the software that utilized the algorithms from the Facebook data.”

A cyber security firm in California, UpGuard, discovered the online information. It wrote its own article on the discovery, reporting as follows:

“On the night of March 20th, 2018, UpGuard Director of Cyber Risk Research Chris Vickery discovered a large data warehouse hosted on a subdomain of AIQ and using a custom version of popular code repository Gitlab, located at the web address gitlab.aggregateiq.com. Entering the URL, Gitlab prompts the user to register to see the contents — a free process which simply requires supplying an email address. Once registered, contents of the dozens of separate code repositories operated on the AggregateIQ Gitlab subdomain are entirely downloadable. Within these repositories appear to be nothing less than mechanisms capable of organizing vast quantities of data about individuals, measuring how they are being influenced or reached by advertising, and even tracking their internet browsing behavior.”

Gizmodo also reports on an AIQ project known as “The Database of Truth.” It writes:

“In an internal wiki, AIQ developers also discussed a project known as The Database of Truth, a system that ‘integrates, obtains, and normalizes data from disparate sources, including starting with the RNC Data Trust.’ (RNC Data Trust is the Republican party’s primary voter file provider.) ‘The primary data source will be combined with state voter files, consumer data, third party data providers, historical WPA survey and projects and customer data.’ ”

Wylie also raised suspicions as to why U.S. hedge-fund billionaire Robert Mercer would be not only donating big money to political campaigns but also investing in data mining companies that work for those campaigns. He said if Mercer puts $10 million into political campaigns, that has to be declared. But if Mercer invests in a company, and it provides services for firms below cost, that does not have to be declared. He is just putting money in as an investor. Wylie suggested this allows campaign spending rules to be gamed.

Wylie was further queried as to whether he had any evidence to back up this assertion. He said he didn’t have any hard evidence but that Robert Mercer was putting up $10 million to $15 million to create an asset that the company was then licensing for $50,000.

When asked if Robert Mercer should be the subject of an investigation, Wylie said “Absolutely.”

“Black Cube on the Nigeria project was engaged to hack the now-president Buhari to get access to his medical records and private emails. AIQ worked on that project. AIQ was handed material in Nigeria from Cambridge Analytica to distribute online. That’s distribution of kompromat and of incredibly threatening and violent video content which I’ve passed on to the committee.

“The videos that AIQ distributed in Nigeria with the sole intent of intimidating voters included content where people were being dismembered, where people were having their throats cut and bled to death in a ditch, they were being burned alive. There were incredibly anti-Islamic and threatening messages portraying Muslims as violent.”

Propaganda campaigns and propaganda films portraying Muslims as violent in the midst of a presidential election reminded us of our reporting on money tied to the U.S. billionaire Charles Koch. (Robert Mercer and his daughter, Rebekah, were initially part of the Koch election campaign funding network before branching off on their own.) Read our two reports, Koch Footprints Lead to Secret Slush Fund to Keep Fear Alive and What’s Ahead in the Trump Hate Wars? Watch this Movie from His Chief Strategist, for a broader understanding of what’s really going on here.