Citigroup’s Loan to Kushner: The Devil Is in the Details­­­ of Citi’s Sordid History 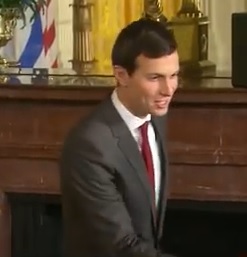 Last evening, the front page digital edition of the New York Times dropped another bombshell in what increasingly feels like a badly scripted daily soap opera that could perhaps be called “As the White House Turns” or “Days of Our Messed Up Lives.”

The Times report focused on big loans that were made to Jared Kushner’s family business by two financial firms after he met at the White House with executives from those firms. There was a $184 million loan from private equity firm Apollo. There was also a $325 million loan by mega Wall Street bank Citigroup shortly after a visit by Citigroup’s CEO Michael Corbat to Kushner’s office at the White House in the spring of 2017.

Despite nepotism laws governing the Executive Branch, Kushner is both the son-in-law to President Trump as well as a Senior Advisor. Despite White House ethics rules, Kushner continues to own a big chunk of Kushner Companies, the family’s sprawling real estate business. The Times’ article puts his ownership stake at “as much as $761 million.” The Times notes an additional conflict: that while Kushner is the point man for Middle East policy “his family company continues to do deals with Israeli investors.”

Kushner is also the fellow who, according to May 2017 reports in the Washington Post and New York Times,  met with Russian Ambassador Sergey Kislyak to attempt to set up a secret back channel of communications with Russians when he was part of the Trump transition team. According to an intercepted communication by U.S. intelligence officials, Kislyak reported back to Russia that Kushner had suggested using Russian diplomatic facilities located in the U.S. for these secret chitchats. Despite this, Kushner amazingly continued to be allowed to review Top Secret documents as part of his Senior Advisor role to the President.

Kushner’s Top Secret clearance has now been stripped and according to media reports, is now less than that of the White House calligrapher.

Wall Street On Parade has extensively reported in the past on the dubious dealings of Citigroup in Washington. Citigroup is the bank that pressured the Bill Clinton administration into repealing the depression-era Glass-Steagall Act in 1999. That act had prevented Wall Street’s speculating investment banks and brokerage firms from owning commercial banks that take in FDIC insured deposits in order to prevent another 1929-1932 style Wall Street crash. Just nine years after the repeal of Glass-Steagall, Wall Street experienced another epic crash, with Citigroup playing a major role in the contagion. Citigroup received the largest taxpayer bailout in U.S. history, taking in $45 billion in equity from the U.S. Treasury; a government guarantee on $300 billion of Citigroup’s dubious assets; the Federal Deposit Insurance Corporation (FDIC) guaranteed $5.75 billion of its senior unsecured debt and $26 billion of its commercial paper and interbank deposits; and the Federal Reserve secretly funneled $2.5 trillion in almost zero-interest loans to units of Citigroup between 2007 and 2010.

Citigroup was created by the merger of Citicorp (parent of Citibank) and Travelers Group (which owned the Wall Street investment bank Salomon Brothers and the brokerage firm Smith Barney). It would not have been allowed to exist but for the largess of the Clinton administration. And the Clintons needed a lot of financial help when they exited the White House. In a June 9, 2014 interview with ABC’s Diane Sawyer, Hillary Clinton said this: “We came out of the White House not only dead broke, but in debt. We had no money when we got there, and we struggled to, you know, piece together the resources for mortgages, for houses, for Chelsea’s education. You know, it was not easy.”

One institution that had big confidence in the Clintons’ future earning power was Citigroup. As we reported in 2014:

“According to PolitiFact, Citigroup provided a $1.995 million mortgage to allow the Clintons to buy their Washington, D.C. residence in 2000. That liability does not pop up on the Clinton disclosure documents until 2011, showing a 30-year mortgage at 5.375 percent ranging in face amount from $1 million to $5 million from CitiMortgage. The disclosure says the mortgage was taken out in 2001.

“Citigroup also paid Bill Clinton hundreds of thousands of dollars in speaking fees after he left the White House. It committed $5.5 million to the Clinton Global Initiative — a program which brings global leaders together annually to make action commitments. Citigroup employees have also been major campaign funders to Hillary Clinton’s political campaigns.”

Then there is that strange employment agreement and mortgage deals that Citigroup had with Jack Lew, who became President Obama’s second U.S. Treasury Secretary after serving as his Chief of Staff. (Lew had been the Director of the Office of Management and Budget in the Clinton administration.)

During Lew’s Senate confirmation hearing to become U.S. Treasury Secretary, it emerged that Citigroup (a prior employer) had paid him a bonus of $940,000 in 2009 (effectively out of public funds since it was insolvent at the time and receiving a taxpayer bailout) on the contractual pre-condition that he would secure a “full time high level position with the United States Government or a regulatory body.”

On January 14, 2013, just four days after Lew was nominated for Treasury Secretary, Citigroup again modified a home mortgage held by Lew, giving him a highly attractive interest rate of 3.625 percent for a 30-year mortgage of $610,000 and simultaneously providing a $200,000 home equity loan at an unstated amount of interest.

Citigroup is one of the major reasons that a controlling wing of the Democratic Party has become known as the Wall Street Democrats. Nothing drove this point home more forcefully than the release of emails from the Obama campaign by WikiLeaks in October 2016. Those emails showed that President Obama, using the email address of bobama@ameritech.net, was communicating in 2008 directly with Michael Froman, an executive of Citigroup, who fed Obama lists of recommended appointments to his cabinet,  while the serially charged bank was collapsing and in the midst of receiving the largest taxpayer bailout in history.

In an email from Froman dated October 6, 2008, with Froman using his Citigroup email address of fromanm@citi.com, Hillary Clinton appears on Froman’s list for Secretary of State or head of the U.S. Department of Health and Human Services (HHS). In a separate list attached to the email, Eric Holder is recommended by Froman for U.S. Attorney General at the Department of Justice or as White House Counsel. (Scroll down to see the email and the attachments here.)  In less than a month after Obama’s election as President on November 4, 2008, Obama had nominated Clinton to be his Secretary of State and Holder as his Attorney General. Holder failed to prosecute any of Wall Street’s top executives for the crimes that led to the greatest financial crash since the Great Depression.

But Citigroup’s Froman was not just involved in recommending top level cabinet appointees. He was also overseeing rank and file positions. In an email dated Saturday, October 18, 2008, Froman, again using his official Citigroup email address, sent the following email to Obama’s advisers, according to the emails leaked by WikiLeaks, which have not been disputed by the Obama camp:

And, finally, there is the question of what Citigroup might have wanted from the Trump administration in the spring of last year as it provided that $325 million loan to the Kushner Companies. The Justice Department had charged Citigroup on May 20, 2015 with a criminal felony count for its participation in the cartel that was rigging foreign currency markets. At that time, Citigroup was already considered a recidivist bank – repeatedly being charged and fined by its regulators.

Instead, on May 22, 2017, the Justice Department’s Acting Assistant Attorney General, Kenneth A. Blanco, announced that Banamex USA, the unit of Citigroup under investigation, was being given a non-prosecution agreement and forfeiting a meager $97.44 million while it simultaneously agreed to criminal violations for “willfully failing to file Suspicious Activity Reports (SARs).” SARs are one of the most basic procedures that U.S. banks employ to guard against money laundering. And yet, the Justice Department found the following at Banamex USA:

It’s quite clear that Trump has no intention of draining the swamp in Washington. The question remains if Mueller and his team will dig down deep enough to purge more than just a superficial layer.