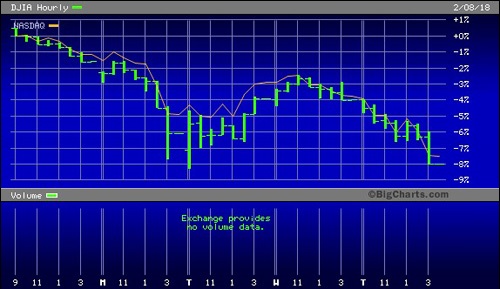 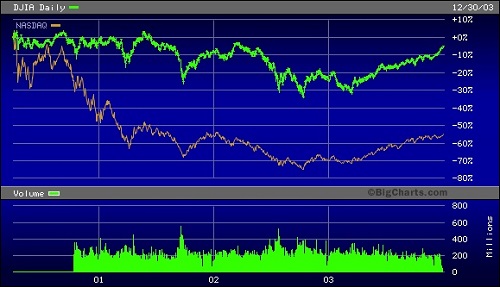 The Dow Jones Industrial Average (Dow) has now had two days of losses of more than 1,000 points in the last four trading sessions: Monday and yesterday. The Dow consists of some of the oldest companies in America and, to a large degree, what are regarded as the safest stocks to hold by investors because of their liquidity, large capitalization and steady dividends.

The Nasdaq, on the other hand, consists primarily of much younger companies, many in the roller-coaster technology field, and far shorter histories of paying dividends.

Typically, in a market panic, one would expect the Nasdaq to show a deeper dive than the Dow. But as the top chart above indicates, on Monday and Tuesday it was actually the Dow that saw a deeper selloff. Then yesterday, Thursday, February 8, the two widely disparate markets traded in almost complete lockstep. (See second chart above.) Why would a far riskier market trade in lockstep with the far safer Dow during a market panic? Surely memories are not so short that they can’t recall how the Nasdaq fared versus the Dow in the dot.com bust that began in March 2000. (See third chart above.)

Logic suggests that what we saw yesterday was the indiscriminate, wholesale dumping of stock portfolios by traders desperate to raise cash any way they could. That then raises the next question: is there something out there that regulators and the public can’t see that is fueling a mass liquidation of stocks by traders who made a wrong-way bet on volatility, interest rates or some other trading strategy.

The monster difference between the volume of advancing stocks versus the volume on declining stocks also suggests wholesale dumping. Dow Jones’ MarketWatch reports that yesterday the New York Stock Exchange (NYSE) saw 2,683 stocks decline while only 342 stocks advanced. Similarly, Nasdaq saw 2,525 stocks decline while 453 advanced. Trading volume was swamped by declining shares. On the NYSE, declining share volume reached 4.74 billion while advance volume came in at a meager 556.45 million. Nasdaq’s volume tallied out at 2.35 billion in decliners versus 363.15 million in advancers.

Exchange-traded products that have shorted the volatility index known as VIX have been widely blamed for causing at least some of the stock market rout. But their cumulative size is minuscule compared to the dollar amount of selling we are seeing in the stock market. Hedge funds, however, may have mimicked that strategy to a far larger degree and taken on massive amounts of leverage to do so. If hedge funds are liquidating stock portfolios to meet margin calls, that would help to explain the inability of the stock market to sustain a rally.

Another big problem is likely the so-called risk-parity funds that weight their portfolios in different asset classes according to the measure of volatility each class is experiencing. It is believed that these funds have been dumping stocks as the VIX has climbed and rebalancing into lower volatility holdings.

That can really feed on itself. No one, including regulators, knows just how big and just how dangerous this strategy has become because big Wall Street banks can hide the size of their exposure in over-the-counter derivative contracts where the details are known only to them and the counterparty to the contract. Over-the-counter credit default derivative contracts are how the big insurer, AIG, blew up in 2008 and required a $185 billion bailout from the U.S. taxpayer. Half of that money quickly went out the backdoor of AIG to pay off its derivative bets to the big Wall Street banks.

If regulators are caught napping again, as they were in 2008, there is going to be some serious egg on President Donald Trump’s and Treasury Secretary Steve Mnuchin’s faces over their talk of Wall Street needing relief from onerous Federal regulations.