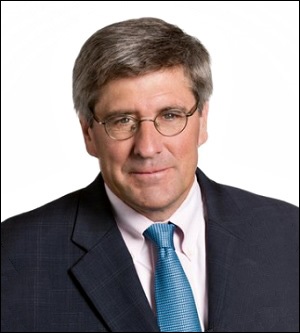 Last Friday, the stock market, as measured by the Dow Jones Industrial Average, plunged 665.7 points. This morning, after just one minute of trading at 9:31 a.m. in New York, the Dow had bled another 307 points. You can expect a big push for the balance of the day by the shills who want to keep the dumb money in the market as a prop for the 1 percenters as they take profits and run.

One member of the Kochtopus (short-hand for the secretive political network and nonprofit front groups backed by billionaire brothers, Charles and David Koch) is Stephen Moore, who has somehow secured himself the position of Senior Economics Analyst on CNN, the 24/7 cable news network whose tagline is “The Most Trusted Name in News.” After the market plunge on Friday, Moore was on air at CNN by Saturday afternoon urging the little guy to stand pat.

When queried about the Friday stock market selloff Moore stated: “Well, I want to try to walk people off the ledge here…I mean, it was a terrible day, no question about it, 670 points. A lot of points to lose on the Dow. But remember the Dow has been up 6,000 points or so over the last 14 months or so. So it’s given up about 10 percent of the gains. Look, the worst thing people could do right now is go out and sell their stock, especially if you are in a retirement fund, a 401(k). Just you know, in fact, I would say, you know, a lot of times you want to buy on the dips because stocks fell, and I would anticipate next week they will go up.”

First of all, no serious economist would ever predict what the stock market will do in a timeframe as short as a week — which raises questions about Moore’s real agenda.

Moore has previously attended the secretive Koch brothers’ political fundraising events and was a former Board Member of the dark money operation known as Donors Capital Fund, Inc. In 2008, Donors Capital sluiced $17,778,600 into the Clarion Fund so that it could release 28 million DVDs of the race-baiting documentary, Obsession: Radical Islam’s War Against the West.  This avalanche of DVDs was inserted in major newspapers across America just seven weeks before the Presidential election, in the midst of a whisper campaign that Obama was a Muslim. The DVDs flooded households in the swing voter states.  (See “Koch Footprints Lead to Secret Slush Fund to Keep Fear Alive,” our exclusive investigative report.)

Like the Koch brothers, Moore is a big fan of deregulation, privatization, small government (meaning gut the social safety net) and climate change denial. He penned the infamous “New York’s Climate Suit Against Exxon Is Like Salem Witch Trials” at Investor’s Business Daily in 2015.

“In recent years, the Heritage Foundation has also received funding from Donors Trust and Donors Capital Fund, including $53,300 in 2010 and $69,850 in 2012. The Koch brothers have donated millions of dollars to Donors Trust through the Knowledge and Progress Fund, and possibly other vehicles.”

Moore’s Twitter page indicates that he is also a Senior Economic Contributor to FreedomWorks, a nonprofit which was spun off from Citizens for a Sound Economy (CSE) in 2004. According to a Federally-funded report on the dirty dealings of front groups for Big Tobacco, ‘To Quarterback Behind the Scenes, Third Party Efforts’: The Tobacco Industry and the Tea Party, Citizens for a Sound Economy “was co-founded in 1984 by David Koch, of Koch Industries, and Richard Fink, former professor of economics at George Mason University, who has worked for Koch Industries since 1990.” According to the report, “CSE supported the agendas of the tobacco and other industries, including oil, chemical, pharmaceutical and telecommunications, and was funded by them.”

Moore now states that he and economist Larry Kudlow “helped draft for then-candidate Trump” the draft for the tax cut plan that is now the law of the land. Moore’s connection to Kudlow raises even more alarming questions. We reported the following on September 12, 2011:

“One of those freedoms most treasured by the Koch brothers is their ability to see a research study done by one of their funded economics departments, then have its dubious data quoted from the mouth of a funded ‘news’ celebrity. From 2002 through 2006, the Koch funded Mercatus Center paid Lawrence Kudlow, a CNBC co-host and later host of his own show, ‘The Kudlow Report,’  a total of $332,500 through his consulting arm, Kudlow & Co. LLC. I obtained the information from public filings Mercatus made with the IRS. It is not known if the Mercatus Center continued to pay Kudlow after 2006. The Mercatus tax filings show $3.1 million paid in a line item called ‘honoraria’ from 2001 through 2007. Emails and phone calls to Kudlow, the CNBC legal department, and three communications executives of both CNBC and NBC/Universal were met with silence, despite a week’s lead time to respond.”

The Kochs have launched a multi-year push back to disassociate themselves from front groups. Watch the video as David Koch stands at the podium for an Americans for Prosperity convention and its Tea Party Groups and explains how he and his brother, Charles, provided the start up funds; then make up your own mind.

Because of a Board battle in 2012 at the Cato Institute, it came out that for the prior 35 years, as the Cato Institute pumped out its free market, small government white papers by the boatloads under the guise of an independent think tank, Charles and David Koch were two of a handful of men who owned the Institute outright.

In addition to their front groups, the Kochs hold super-secretive confabs at tony resorts to map out their political strategy with a 200-plus roster of one-percenters and well-placed media taking heads. In a June 2011 Koch network meeting at the luxury Ritz-Carlton resort in Colorado, the brothers promised the “mother of all wars” to take the White House in 2012. It has been estimated that the pair spent upwards of $400 million in their failed attempt to put the Mitt Romney/Paul Ryan ticket in the White House along with their scheme to privatize Social Security.

The bottom line here is this: be very careful where you get your investment advice. Clearly, the right wing has infiltrated the so-called liberal media.