An Open Message to Parkland Students: Don’t Underestimate the Enemy 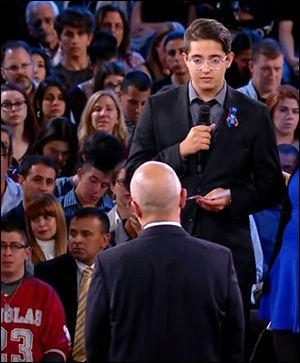 Carmen Schentrup would have celebrated her 17th birthday yesterday had she not been gunned down in a hail of bullets from an AR-15 semi-automatic assault weapon on February 14 at the Marjory Stoneman Douglas High School in Parkland, Florida by an expelled student who had bought the gun legally when he was just 18 years old. Last evening her brother, Robert, appeared at a CNN Town Hall that was convened to discuss the shooting. He posed the following question to Congressman Ted Deutch who was present at the Town Hall:

“If a majority of Americans have long supported stricter gun control regulations, but our elected officials who are supposed to represent the people have done nothing, does this mean that our democracy is broken?”

Congressman Deutch, a Democrat who does support strong gun laws, told the anguished young man that our democracy is “a little broken.”

But our democracy is not a little bit broken. Our democracy is a wistful relic of a bygone era when corporations and Super Pacs and billionaires could not outspend the average American in elections by staggering amounts of money. For example, according to the Center for Responsive Politics, the hedge fund, Renaissance Technologies, gave $16.5 million to support the Hillary Clinton presidential campaign in 2016 while it was also the number one contributor to the Donald Trump campaign with $15.5 million. No matter who wins the Oval Office, the American people lose.

The same is true in Congress. If the NRA doesn’t own your elected voice, Wall Street does; or Big Oil does; or Big Pharma does.

Despite the wide publicity of the San Bernardino, California shooting on December 2, 2015 where 14 people were killed and 22 injured, the very next day the U.S. Senate rejected a bill to tighten background checks on those attempting to buy a gun. Not long after 20 young children and 6 adults were gunned down by a lone assailant at Sandy Hook Elementary School in Newtown, Connecticut the U.S. Senate also rejected tighter background check legislation.

The Parkland, Florida shooting left 14 students and 3 adults dead. It marks the 30th mass shooting in just the first 45 days of 2018. And yet Congress allows the AR-15 and other assault weapons to be sold to civilians in the United States – in many states to teenagers as young as 18.

Yes, there are still a small number of moral members of Congress who continue to work for and fight for the American people. But even they have been sold out by the corrupted two-party system that will not allow an uncompromised voice to become President or rise to a position of power in Congress. Nothing better underscores this than how Senator Bernie Sanders was deviously undermined in his presidential primary efforts by the Democratic National Committee.

The unrelenting mass shooting of our nation’s children is the most tragic and emotionally devastating example of a perverted and grotesque campaign financing system where only corporate interests or those of the billionaires have a voice in our government. But the next generation is not only going to suffer from the lifelong effects of Post Traumatic Stress Disorder from mass shootings in what were once considered safe spaces in our country, but their environment is also being destroyed by the climate change deniers in Congress who are funded by Big Oil.

And look at what happened after the worst economic collapse in the United States since the Great Depression. Not one executive of any major Wall Street firm that caused the financial crash in 2008 through fraudulent activities was prosecuted by the U.S. Justice Department — which was headed at the time by law partners from Covington & Burling – the Big Tobacco law firm that was singled out in a Federal Court decision for hiding the deadly effects of cigarette smoke for decades. How did those Covington & Burling lawyers get those jobs? They got those jobs because President Obama outsourced the staffing of his administration to an executive of Citigroup, Michael Froman, while the bank was both insolvent and receiving the largest taxpayer bailout in U.S. history as a result of its corrupt behavior.

The financial crash has also left a deep and tragic emotional toll on Americans. It cost 8.7 million Americans their jobs; 10 million families lost their homes, many through illegal foreclosures; and it wiped out almost half of the wealth of middle class families compared to 2001. And just look at who has grotesquely benefited from that. President Obama named Jack Lew, a former executive from the very division of Citigroup that had tanked the firm, to be his Treasury Secretary. President Trump named Steve Mnuchin, a foreclosure king, to be his Treasury Secretary. Both Presidents named lawyers who had extensive ties to representing Wall Street to head its top cop, the Securities and Exchange Commission. Despite both Democrat and Republican Party platforms in 2016 that called for reinstating the Glass-Steagall Act, that would remove taxpayer-backstopped insured depository banks from the gambling casinos on Wall Street, Congress hasn’t even gotten close to passing that legislation.

The Herculean efforts and voices of the Parkland students, their devoted parents and teachers will be an exercise in futility unless they simultaneously address the malignant disease that has devoured our democracy. The shootings, like the collapse of our financial system in 2008 and the ongoing devastation to our environment, are just symptoms. The malignant disease is how political campaigns are financed in America.