Serially Charged Deutsche Bank Gets a Subpoena from Mueller 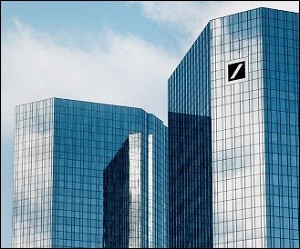 If Deutsche Bank is trying to remove itself from scandalous headlines, it’s not doing a very good job at it.

The German language newspaper, Handelsblatt, reported yesterday that Special Counsel Robert Mueller has subpoenaed bank records from Deutsche Bank relating to President Trump and his family members. Handelsblatt writes that “The former real-estate baron has done billions of dollars’ worth of business with Deutsche Bank over the past two decades, and First Lady Melania, daughter Ivanka and son-in-law Jared Kushner are also clients.” The central focus of the Mueller probe is the Trump campaign’s involvement with Russia.

On May 23 of this year, Congresswoman Maxine Waters and other House Democrats sent John Cryan, CEO of Deutsche Bank, a letter regarding its ties to the Trump family and Russia. The letter began:

“We write seeking information relating to two internal reviews reportedly conducted by Deutsche Bank (“Bank”): one regarding its 2011 Russian mirror trading scandal and the other regarding its review of the personal accounts of President Donald Trump and his family members held at the Bank. What is troubling is that the Bank to our knowledge has thus far refused to disclose or publicly comment on the results of either of its internal reviews. As a result, there is no transparency regarding who participated in, or benefited from, the Russian mirror trading scheme that allowed $10 billion to flow out of Russia. Likewise, Congress remains in the dark on whether loans Deutsche Bank made to President Trump were guaranteed by the Russian Government, or were in any way connected to Russia. It is critical that you provide this Committee with the information necessary to assess the scope, findings and conclusions of your internal reviews.

“Deutsche Bank’s failure to put adequate anti-money laundering controls in place to prevent a group of traders from improperly and secretly transferring more than $10 billion out of Russia is concerning. According to press reports, this scheme was carried out by traders in Russia who converted rubles into dollars through security trades that lacked any legitimate economic rationale. The settlement agreements reached between the Bank and the New York Department of Financial Services as well as the U.K. Financial Conduct Authority raise questions about the particular Russian individuals involved in the scheme, where their money went, and who may have benefited from the vast sums transferred out of Russia. Moreover, around the same time, Deutsche Bank was involved in an elaborate scheme known as ‘The Russian Laundromat,’ ‘The Global Laundromat,’ or ‘The Moldovan Scheme,’ in which $20 billion in funds of criminal origin from Russia were processed through dozens of financial institutions.”

Waters also outlined to Cryan why she and her colleagues were suspicious about Deutsche making loans to Trump. The letter stated:

“In addition to the internal review conducted on the mirror trading scheme, Deutsche Bank also reportedly conducted an internal review of the personal accounts of President Trump and his family members, several of whom serve as official advisors to the President. Press reports citing unnamed sources indicate that this review was done to determine if loans made to him were backed by guarantees from the Russian Government, or were in any way connected to Russia, as they were made in ‘highly unusual circumstances.’ At a time when nearly all other financial institutions refused to lend to Trump after his businesses repeatedly declared bankruptcy, Deutsche Bank continued to do so — even after the President sued the Bank and defaulted on a prior loan from the Bank — to the point where his companies now owe your institution an estimated $340 million.”

One common link between Deutsche Bank and the Trump family is Vnesheconombank (VEB), a Russian state-owned bank which has been under U.S. sanctions since July 2014 for Russia’s annexation of Crimea and aggression in Ukraine. Jared Kushner, Trump’s son-in-law, held a December 13 meeting with Sergey Gorkov, Chairman of VEB.

“…VEB acts as an agent for the Russian Government for the purposes of accounting, servicing, and repaying the sovereign debts of the former USSR and Russia; accounting, servicing, and repaying government loans issued by the former USSR and Russia to foreign borrowers; collecting debts from legal entities of Russia and municipal governments; providing and executing state guarantees of Russia and monitoring projects implemented by Russia with involvement of international financial institutions.”

Reuters reported in May that “FBI investigators are examining whether Russians suggested to Kushner or other Trump aides that relaxing economic sanctions would allow Russian banks to offer financing to people with ties to Trump, said the current U.S. law enforcement official.”

Deutsche Bank has a long history of running afoul of U.S. regulators and the U.S. Department of Justice. This past January the U.S. Justice Department announced a $7.2 billion settlement with Deutsche over its illegal issuance of mortgaged backed securities and shoddy lending practices. The settlement consisted of a $3.1 billion penalty and $4.1 billion in relief to those impacted by its illegal actions. The Statement of Facts released by the Justice Department at the time of the settlement included the text of what those inside the bank knew about the fraud as it was occurring.

The text indicated that while Deutsche Bank was representing to investors in its securitized mortgage products that it had followed underwriting guidelines, its own reviews confirmed that loans were sometimes underwritten to anyone with “half a pulse.” The Statement of Facts had this to say further on the matter:

“Deutsche Bank also knowingly misrepresented that loans had been reviewed to ensure the ability of borrowers to repay their loans.  As Deutsche Bank acknowledges, the bank’s own employees recognized that Deutsche Bank would ‘tolerate misrepresentation’ with ‘misdirected lending practices’ as to borrower ability to pay, accepting even blocked-out borrower pay stubs that concealed borrowers’ actual incomes.  As a Deutsche Bank employee stated, ‘What goes around will eventually come around; when performance (default) begins affecting profits and/or the investors who purchase the securities, only then will Wall St. take notice.  For now, the buying continues.’ ”

Also this past January, U.S. and U.K. regulators reached a $630 million settlement over Deutsche’s so-called “mirror trades” that were referenced in the letter by Congresswoman Waters and used to launder $10 billion out of Russia. The bank paid $425 million to the New York Department of Financial Services and approximately $205 to the U.K.’s Financial Conduct Authority (FCA).

In April 2015, Deutsche Bank entered into a deferred prosecution agreement with the Justice Department over wire fraud and antitrust charges related to its role in manipulating U.S. Dollar LIBOR and engaging in a price-fixing conspiracy to rig Yen LIBOR. (LIBOR is an interest rate benchmark used to set rates on everything from credit cards to mortgages.) At the same time, a bank subsidiary pleaded guilty to wire fraud for manipulating LIBOR. The tab to Deutsche Bank was $775 million in criminal penalties.

In November 2015, Bloomberg News reported that “Deutsche Bank will pay $258 million and fire six employees to resolve a probe into sanctions violations from 1999 to 2006 after a string of e-mails showed employees discussed the ‘tricks’ used to move money in and out of Iran, Libya, Syria, Burma and Sudan.”

In 2013, FHFA, the conservator of Freddie Mac and Fannie Mae, announced a $1.925 billion settlement with Deutsche Bank to resolve claims that the bank had misled the mortgage giants in the sale of mortgage-related investments. Deutsche Bank did not admit wrongdoing in that settlement.

In 2010, Deutsche Bank agreed to pay $553.6 million to the U.S. and admitted criminal wrongdoing in a fraudulent tax shelter scheme that facilitated billions of dollars in U.S. tax losses.

Correction: The article has been updated to correct the spelling of Maxine Walters to Waters.