Saying Goodbye to Richard Cordray at CFPB Is Hard to Do 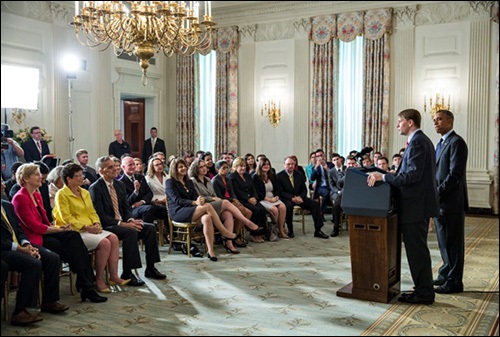 Richard Cordray Officially Took the Helm at the CFPB on July 17, 2013

Last Wednesday, Richard Cordray, the Director of the Consumer Financial Protection Bureau (CFPB), announced he would be stepping down from his post at the end of this month. Cordray is the former Attorney General of Ohio and there are rumors he may make a run for Governor there.

The CFPB, a Federal agency, was created under the Dodd-Frank financial reform legislation of 2010. The legislation resulted from the greatest fraudulent wealth transfer from the middle class to the 1 percent since the Wall Street frauds of the late 1920s. Both periods ended in an epic financial crash that left the U.S. economy on life support. Since the financial crash of 2008, the U.S. economy has grown at an anemic 2 percent or less per year despite massive fiscal stimulus and unprecedented bond purchases (quantitative easing) by the Federal Reserve.

Despite the desperate need for the CFPB, Republicans fought against its creation and then refused to confirm Cordray for his post as Director for two years. Cordray was finally sworn in on July 17, 2013 after having served in the post for 18 months under a recess appointment by President Obama. Republicans have continued to battle Cordray and attempt to derail his work in protecting vulnerable consumers from credit card, student loan and mortgage frauds.

Big banks on Wall Street are particularly hostile to the fact that the CFPB allows consumers who have been victimized by financial firms, even where small amounts of money are involved, to file a complaint and receive a timely response. Wall Street also hates the fact that these complaints go into a permanent database, which can be mined by class-action attorneys and prosecutors looking for patterns of fraud. That database is likely to be one of the first things to go under a Trump appointee.

Wall Street On Parade has covered Cordray’s herculean efforts on behalf of those without a voice in America and the insidious efforts of Congressional Republicans and Wall Street lobbyists to derail his work at every turn. Today we look back on what the CFPB has accomplished for defrauded Americans and the assaults made against it.

In July of this year, the CFPB issued its final rule to allow consumers who have been defrauded in financial transactions involving credit cards and bank accounts to have access to file a group action (known legally as a “class action”) using the nation’s courts. Wall Street banks have been running a private justice system for decades, known as mandatory arbitration, which bans both customers and employees from taking claims to court. The U.S. Senate reversed the rulemaking in September with Vice President Mike Pence casting the deciding vote to break the 50-50 tied vote. (See also: House Republicans Rig Hearing to Block Consumers from Going to Court.)

In August, the CFPB issued a critically important report on the nefarious peddling of reverse mortgages to senior citizens as a bogus means of allowing them to collect a larger Social Security benefit by delaying payments to a later age. The study reported the following:

“The CFPB examined different scenarios and found that, in general, the reverse mortgage loan costs exceed the cumulative increase in Social Security that homeowners would receive in their lifetime by delaying Social Security benefits. Furthermore, using this strategy will likely diminish the amount of home equity available to borrowers later in life. As a result of the diminished equity, borrowers that seek to sell their homes after using this strategy may have limited options for moving to a new location or handling a financial shock.”

No member of Congress has bullied the CFPB and Cordray more than Jeb Hensarling, the Republican Chair of the House Financial Services Committee. Hensarling’s largest donors for his 2016 political campaign were Wall Street firms and trade associations. Hensarling has consistently attempted to portray the CFPB as a “rogue” federal agency instead of the tough consumer protection agency that it is. In February, the Wall Street Journal ran an opinion piece by Hensarling with the headline: “How We’ll Stop a Rogue Federal Agency: Congress can defund Elizabeth Warren’s unaccountable and unconstitutional CFPB.” (Senator Elizabeth Warren had been instrumental in designing the structure of the CFPB in the face of fierce opposition from Wall Street.)

In September of 2016, the CFPB announced a $185 million settlement over the charges that Wells Fargo had opened two million accounts for its customers without their knowledge or permission, sometimes illegally funneling money to the new account from the old account to generate fees.

The Wells Fargo action came a year after the CFPB reached a $700 million settlement with the big Wall Street banking behemoth, Citigroup, for deceptively selling add-on products to credit card customers. Among a litany of fraudulent practices, the CFPB found that Citibank led 2.2 million customers to believe they were paying to have their credit card monitored for fraud and identity theft, “when, in fact, these services were either not being performed at all, or were only partially performed,” according to the CFPB.

No State or Federal agency in America has done more to shine a bright light on the frauds being perpetrated on the youth of our nation through devious and fraudulent student loan practices than the CFPB under Cordray. This is a national disgrace and remains critically under-addressed by the U.S. Congress. A sampling of Wall Street On Parade’s coverage in this area includes the following:

NYU’s Gilded Age: Students Struggle With Debt While Vacation Homes are Lavished on the University’s Elite

Richard Cordray will be sorely missed by those who believe that fairness and justice still have a place in America.